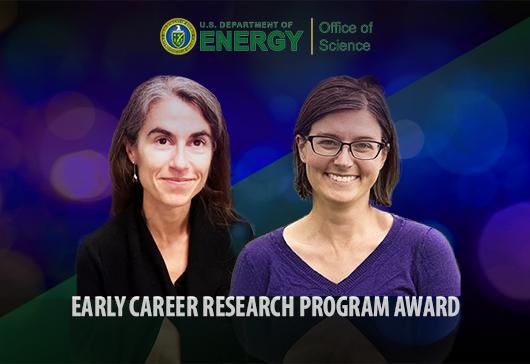 Federica Coppari and Erin Nuccio are among 76 scientists nationwide selected for the recognition. Under the program, typical awards for DOE national laboratory staff are $500,000 per year for five years.

"The Department of Energy is proud to support funding that will sustain America's scientific workforce and create opportunities for our researchers to remain competitive on the world stage," said DOE Under Secretary for Science Paul Dabbar. "By bolstering our commitment to the scientific community, we invest into our nation's next generation of innovators."

The Early Career Research Program, now in its 11th year, is designed to bolster the nation’s scientific workforce by providing support to exceptional researchers during crucial early career years, when many scientists do their most formative work

A research scientist in the High Energy Density section of the Physics and Life Sciences Directorate (PLS), Coppari was nominated in the Fusion Energy Science Division for developing new experimental platforms to understand material behavior at extreme pressures and temperatures.

“I’m really excited about my project being selected for this award,” she said. “It is such an honor to receive this prestigious recognition and I look forward to the new research this award will enable.”

Coppari joined the Lab in 2011 as a postdoctoral researcher and works on developing new experimental platforms to understand material behavior at extreme pressures and temperatures and, in particular, the physics of phase transitions, melting and material equations of state.

Giant lasers can compress and heat matter to extreme states and when combined with bright X-ray sources they become very powerful tools to investigate the atomic-level changes induced by strong and ultra-fast compression. She uses large laser facilities such as Omega and the National Ignition Facility and synchrotron light sources to perform X-ray diffraction and extended X-ray absorption fine structure experiments.

Coppari plans to use the DOE funding to move forward to understand mixing and metastability in warm dense matter with an emphasis on planetary constituent materials.

“Matter deep inside planets is at extreme pressures and temperatures and knowledge of its properties is key to improve our understanding of planetary formation and interior structure,” she said. “In particular, how the different constituents mix (or unmix) when subjected to extreme conditions is extremely important, although far from being understood. Pulling together ultra-fast compression and X-ray and optical diagnostics, this research will investigate the transformations happening at extreme conditions of pressure, temperature and timescale in complex, multi-component systems to obtain a better understanding of their mixing properties and their pathways to phase transitions.”

A staff scientist in the Nuclear and Chemical Sciences Division of PLS, Nuccio was nominated in the Biological and Environmental Research category for her work studying the role of microbes in bio-geochemical cycling processes using a systems biology approach

“I’m blown away. It’s an incredible honor to be selected for this award,” Nuccio said. “The national labs have so many talented early career scientists. This award is a game-changer for building my research career at LLNL.”

Nuccio started as a postdoc at LLNL in 2013 studying plant-microbe interactions and was converted to staff scientist in 2016. She studies how microbes control carbon and nutrient cycling in soil and focuses on the zones surrounding plant roots and fungal hyphae (known as the rhizosphere and hyphosphere). She uses stable isotopes as a way to track interactions and nutrient exchanges in the notoriously complex soil environment.

“Throughout my career, I have been keenly interested in the fundamental ecology of plant-microbe-soil interactions, and the role these tripartite relationships play in terrestrial carbon cycling and ecosystem sustainability,” she said.

“Microbes engage in a lively ‘cross-talk’ that we are only beginning to understand through next-generation sequencing and metabolomics technologies. I’m excited to dig deeper into the fungal hyphosphere, which is an active site of soil nutrient cycling that we know little about and is a hotspot for fungal-bacterial interactions. For fungi that don’t have the ability to decompose plant material by themselves, this is a key zone for nutrient foraging; I expect fungal interactions with the microbial community to be of paramount importance in this region,” Nuccio said.

To be eligible for the DOE award, a researcher must be a tenure-track assistant or associate professor at a U.S. academic institution or a full-time employee at a DOE national laboratory, who received a Ph.D. within the past 10 years. Research topics are required to fall within one of the Office of Science's six major program offices: