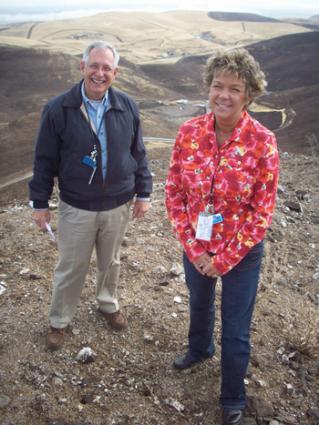 John Lehr and Kathy Angleberger from NNSA visited Site 300 in October. Lehr and Angleberger, both EM employees before moving to NNSA, visited the site to observe the soil solidification project at Bldg. 850 in background.

October marked the 20th anniversary of the formation of the Department of Energy's Office of Environmental Management (EM), whose mission is to complete the safe cleanup of the environmental legacy left by five decades of nuclear weapons development and government-sponsored nuclear energy research.

At LLNL, EM funded the investigation and cleanup of soil and groundwater contamination discovered at the Livermore Site and at Site 300 in the early 1980s. From 1989 through 2006, the Laboratory accomplished significant progress in meeting regulatory agency requirements for site cleanup.

Since beginning remediation at the Livermore Site, about 3.6 billion gallons of groundwater and more than 340 million cubic feet of soil vapor have been treated, removing more than 6,800 pounds of volatile organic compounds from the subsurface. To achieve this, the Lab:

Though all of Livermore Site and most of Site 300's cleanup activities have been transferred from EM to the National Nuclear Security Administration, a few EM activities remain at Site 300, including the Bldg. 850 soil solidification project now nearing completion and remedial work at Bldg. 812 that is planned in the next few years. The Site 300 environmental restoration resulted in the treatment of 365 million gallons of groundwater, removing more than 15,000 pounds of contaminants from the subsurface. Site 300 activities included:

EM supported the consolidation of waste management operations in the Lab's new Decontamination and Waste Treatment Facility, as well as the disposal of legacy waste from the Lab.

Finally, EM also sponsored technology development in environmental restoration, waste treatment and disposition, and pollution prevention. These include Dynamic Underground Stripping, which was deployed at other sites, including Southern California Edison's Visalia Pole Yard , where it was instrumental in cleaning the site so well that it has been taken off the Environmental Protection Agency's Superfund list.