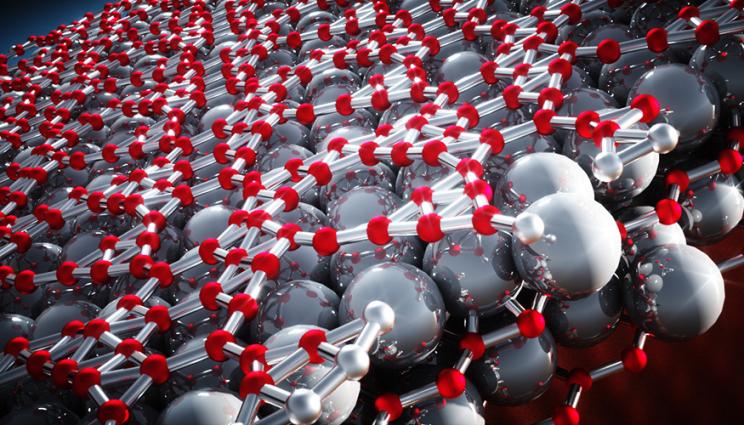 Metal boride surfaces and their single-layer variants — known as borophenes — are generally thought to feature a regular arrangement of atoms at low to moderate temperatures. The LLNL team proved that in many cases, these atoms actually disorder dynamically: a surprising phenomenon in contrast to conventional understanding of how most solid-state surfaces behave. The surface disorder means each atomic site has different local properties. According to the team’s research, some of these sites can make dissociation of hydrogen molecules easier, which in turn is expected to accelerate activation of the material during hydrogen storage.

The findings have implications for other applications, too. In addition to hydrogen storage, metal borides and borophenes can be used for superconductivity, electrocatalysis, optoelectronics and as coatings for thermal and corrosion resistance. In several of these applications, the speciﬁc boron surface atom arrangements play an outsized role in determining the overall performance.

When performing in silico design of materials whose functions — hydrogen storage, superconducting performance, electrocatalytic reactivities — are closely tied to their surface configurations, a comparison of apples and oranges occurs if the assumption of static, ordered surfaces does not actually hold.

“What we found here is an exceptional example, showing surfaces of a crystalline material can actually be amorphous and dynamic. We need to rigorously revisit some of our basic assumptions in the surface science community,” said LLNL materials scientist Sichi Li, lead author of a paper appearing in Nature Communications.

“If the surfaces are crystalline and ordered, every site is basically the same. Disordered surfaces create a whole range of surface reactivities. If we can use this capability, it could be a new approach for custom-tuning surface functionality for faster energy storage and conversion,” said LLNL materials scientist and co-author Brandon Wood, who leads the LLNL team on materials-based hydrogen storage.

The work is funded by the Department of Energy, Office of Energy Efficiency and Renewable Energy, Hydrogen and Fuel Cell Technologies Office, through the Hydrogen Storage Materials Advanced Research Consortium (HyMARC)