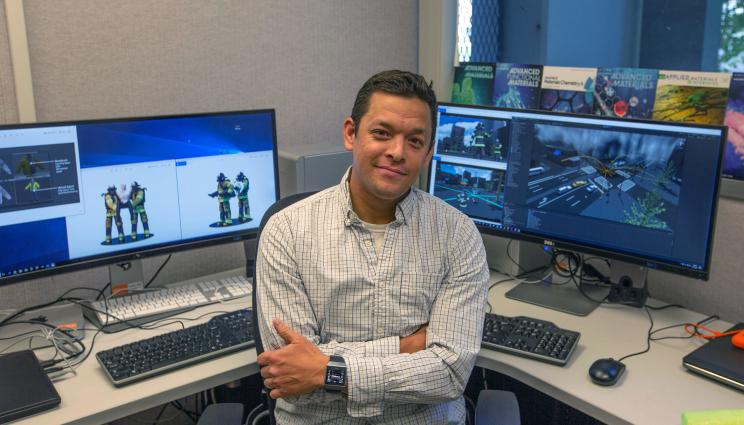 Ryan Chen, an LLNL data analyst and visualization technologist, has developed a model called the RDD Studio that provides a detailed simulation of what an optimal response to a radiological dispersal device, or “dirty bomb,” would look like. Photo by Julie Russell/LLNL

If a radiological dispersal device (RDD), or "dirty bomb," ever explodes in the United States, emergency crews may be better prepared because of a simulator developed by an Lawrence Livermore National Laboratory (LLNL) visualization technologist.

Called the RDD Studio, the model was developed by the Lab’s Ryan Chen to provide a detailed simulation of what an optimal response to an RDD would look like.

The simulator grew out of an effort to give "life" to a 2017 Department of Homeland Security Science and Technology Directorate (DHS S&T) report, "RDD Response Guidance: Planning for the First 100 Minutes," and has helped produce 14 videos that illustrate the hazards, tactics and procedures for an RDD response.

The simulator developed by Chen, a data analyst and visualization technologist in the Computing Directorate’s Global Security Computing Applications Division, has been drawing high praise since it was released in April.

The guidance report and the model can be found on the DHS website. All 14 videos are available on the DHS S&T YouTube channel.

"This 20-minute video by LLNL and the National Urban Security Technology Laboratory (NUSTL) is the best description of the management of a ‘dirty bomb’ or RDD incident out there," said John White, the radiation safety officer for the Veterans Administration North Texas Health Care System.

"Your law enforcement and fire/hazards personnel must view this video. It should become a regular part of your training for any radiological event. The RDD Studio can assist emergency crews in learning how to manage the risk in responding to an RDD."

Mark Hundley, a master firefighter with the City of Virginia Beach, Virginia, and a leader for the Virginia-2 Urban Search and Rescue team, calls the response to the video among firefighters "incredible."

"The visual depiction gives the basic frontline firefighter a better understanding of a radioactive incident that is very hard for most to understand from a simple power point slide. This video does an amazing job. I can’t express the value of this video for us," Hundley explained.

Brooke Buddemeier, a principal investigator for Global Security’s N Program radiological and nuclear response efforts, pointed out that the purpose of the simulator is to demonstrate to emergency responders how they can do their jobs and save lives without putting themselves in danger.

An RDD consists of conventional explosives combined with radioactive material with the intent of spreading the radioactive contamination around the scene of the explosion and possibly downwind.

After the RDD is simulated and the radiological hazards are established, RDD Studio deploys virtual responders to demonstrate the tactics provided in the DHS response guidance.

The use of a customizable software simulator provides the capability to evaluate response tactics and outcomes in a variety of circumstances. Users can test procedures against various source types, activity level, number of fragments, fragment sizes, number of casualties, number of civilians nearby, number of response assets deployed and responder arrival frequency.

Since the animations produced by the RDD Studio have gone online, they have been viewed by more than 2,600 people, with many of them thought to be emergency responders.

"These videos have been very well received by the emergency response community as they visualize complex radiological response issues in a way that makes it easier to understand," Buddemeier said.