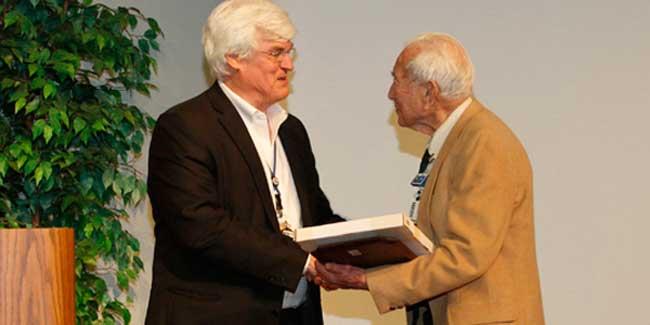 One of the Laboratory's early phone books, in December 1952, listed about 250 employees, including a newly-transferred physicist named Dick Post.

At the time, Harry Truman was the nation's president and Herb York was the director of Lawrence Livermore National Laboratory.

"Dick Post has reached a milestone that is unprecedented at the Livermore Laboratory and perhaps at any national lab," Albright said. "With this milestone, we are recognizing and celebrating his 60 years of scientific contributions to the Laboratory, to the Department of Energy and to the nation...He has a truly remarkable career."

"The United States is fortunate that after more than six decades of service, you continue to apply your scientific acumen, innovation and expertise to advance our energy, economic and national security.  Your legacy is an inspiration for the next generation of scientists, engineers and entrepreneurs who will tackle America's grand challenges."

Throughout much of his Laboratory career, Post has been a leading researcher in magnetic fusion experimental research. For that work, he received the James Clerk Maxwell prize in 1978 and the Fusion Power Associates Fusion Pioneer Award in 2008.

Along the way, Post has worked on other important energy and transportation research, including electro-mechanical batteries -- or flywheels -- for energy storage.

In 1973, Post and his son, Stephen, authored a seminal article on flywheels that appeared in Scientific American magazine. They proposed that advances in materials and mechanical design made it possible to use large flywheels to store energy and smaller ones to provide power for cars, trucks and buses.

Now, almost 40 years later, Post is the chief scientist on a multimillion dollar cooperative research and development agreement project with a company to commercialize flywheels for bulk energy storage.

In addition, he has developed a magnetic levitation train technology - called Inductrack - that uses passive permanent magnets and has been licensed to San Diego-based General Atomics, which has constructed a 450-foot-long prototype track system.

To date, Post has earned 29 patents, with more pending. During the past four years, since he turned 90, some 15 records of inventions (a step toward a patent) have been filed on his behalf.

While he retired in 1994, Post still comes into the Laboratory to work four days each week. He takes Fridays off, because, after all, he is retired.