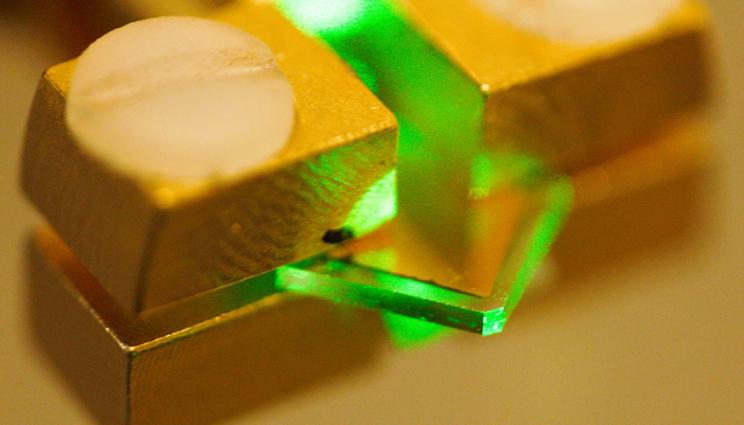 A photoconductive switch made from a synthetic, chemical vapor deposition diamond under test.

Diamonds are not just for jewelry anymore

When it comes to the semiconductor industry, silicon has reigned as king in the electronics field, but it is coming to the end of its physical limits.

Diamond has been shown to have superior carrier mobility, break down electric field and thermal conductivity, the most important properties to power electronic devices. It became especially desirable after the development of a chemical vapor deposition (CVD) process for growth of high-quality single crystals.

The team explored properties of such synthetically made diamonds that are higher quality than naturally occurring ones. “In electronics you want to start from as pure material as you can so you can mold it into a device with desired properties,” said LLNL physicist Paulius Grivickas, lead author of a paper appearing in Applied Physics Letters.

In photoconductive devices, the best combination of conductivity and frequency response is achieved by introducing impurities, which control carrier recombination lifetimes. Researchers found that in diamond, a cheap and easy alternative to this approach is electron irradiation where recombination defects are created by knocking the lattice atoms out of place.

“We said to ourselves ‘let’s take this pure high quality CVD diamond and irradiate it to see if we can tailor the carrier lifetime,’” Grivackas said. “Eventually, we nailed down the understanding of which irradiation defect is responsible for carrier lifetimes and how does the defect behave under annealing at technologically relevant temperatures.”

Photoconductive diamond switches produced this way can be used, for example, in the power grid to control current and voltage surges, which can fry out the equipment. Current silicon switches are big and bulky, but the diamond-based ones can accomplish the same thing with a device that could fit on the tip of a finger, Grivickas said.

The research also has applications in the energy delivery systems where the team demonstrated a possibility of a megawatt-class radio frequency power generation, which requires optimization of diamond’s high-frequency response.

Livermore engineers Lars Voss and Adam Conway as well as researchers from Vilnius University in Lithuania, Belarusian State University and the National Academy of Sciences in Belarus collaborated in this work.

The research was funded by LLNL’s Laboratory Directed Research and Development program.