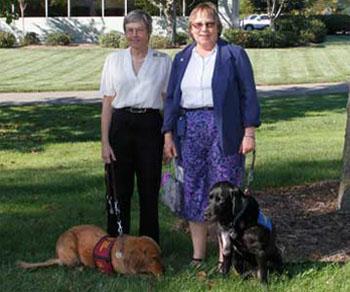 Editor's Note: This is one in a series of stories about Lab employees who volunteer with HOME Campaign agencies.

Dogs may be man's best friend, but they also can be a diabetic's watchful guardian.

This is what the staff of the Lab's Health Services Department recently learned when Hilary Anne Freeman, a diabetic education nurse who also is the sister-in-law of Health Services' Phil Arzino, visited the Lab with her skilled companion dog Rainie.

Freeman is an insulin dependent diabetic. If her blood sugar were to drop quickly, she could suffer acute dangerous hypoglycemia, shock or even death. And, if she were to experience prolonged hyperglycemia she would be subject to long-term diabetes complications.

This is where Rainie, always by Freeman's side, steps in to provide an early warning, usually in the way of a gentle nudge. Rainie has been trained to recognize and go on alert on the biochemical scent that a diabetic's body produces as their blood sugar changes rapidly. The scent is universal and comes from the breath and the skin.

You could say that Rainie's current job as a diabetic alert dog is her second career. Raised in the Guide Dogs for the Blind program, trainers discovered that Rainie was skittish in crowds and bothered by noise, especially from public transportation. So, Rainie made a career change to a service field where she now relies primarily on her nose, instead of sight and sound. Rainie's senses are so strong "it's almost like ESP," Freeman says. "The scent they are trained to sense is so pervasive for alert dogs," she adds, "they can smell it even from a distance."

Freeman and Rainie work with Early Alert Canines , one of the many agencies listed in the HOME Campaign. Rainie has proved to be a life-changer, as well as a life-saver.

"The dogs are amazing," Freeman remarked. She explained how the diabetic alert dogs are trained with clothes worn and donated by diabetic individuals for training purposes. When the dogs become proficient in picking up the "dead scent," they are then placed in a finishing home with an active team to learn the "live scent."

Diabetic alert dogs can help both the young and old. Public access service dogs are placed with diabetics at least 12 years old. Infants and younger diabetics can be paired with a "skilled companion" alert dog for the same medical alerting capabilities in a home pet. These skilled companions help provide monitoring and peace of mind for the parents of these young diabetics. Although it costs approximately $5,000 to train each canine, Early Alert Canines provides these medical alert dogs to clients at no charge.

Freeman said that the need is greater than the number of eligible dogs. "So many people could benefit from these dogs," Freeman said.

The field of diabetic alert dogs is fairly new, about a decade old. Scientists believe the dogs pick up on scents created by chemical changes within a person's body, long before the person can feel or measure the change with current blood sugar measuring methods. A reason could be that dogs are enabled with some 220 million olfactory receptors in the nose, while humans have only 5 million.

For the service dog who is still a dog, the task of sensing a drop in blood sugar is less scientific and more recreational. The dogs are immediately rewarded with a treat for their actions. And for the human who is helped, the term "watch dog" takes on a whole new meaning.

Joining Freeman and Rainie during their visit to the Lab were Ginny Dance-Rios, an administrative specialist in Computation, and her diabetic alert dog, Eloise.

Dance-Rios acquired her canine from Dogs4 Diabetics , also an agency listed with the HOME Campaign.

Eloise has been by her side since September 2006 and comes to work with Dance-Rios every day, through the approvals of the Health Services Department and the Security Organization.

Dance-Rios has hypoglycemic unawareness, and does not experience the usual early warning symptoms of low blood sugar. Eloise lies under her desk and often notifies her of a pending low, keeping her on better track of her health. "She has saved my life on numerous instances, Dance-Rios said. "Most of the people I work with respect the fact that if Eloise gets attention from them she will pay less attention to me. They understand the vital role Eloise plays in my life," Dance-Rios says. "She's an integral part of my diabetes care," she adds. Eloise gives off alerts at work, in the car, at the movies and at night.

Dance-Rios said that it was a "wonderful enlightening experience" to meet Hilary and Rainie. "It's nice to not feel so alone. I gained some valuable information from Hilary," she said.

As for Rainie and Eloise, they were a bit shy. But after all, they were on duty and keeping a watchful 'nose' on their humans.

Saving lives one bark at a time