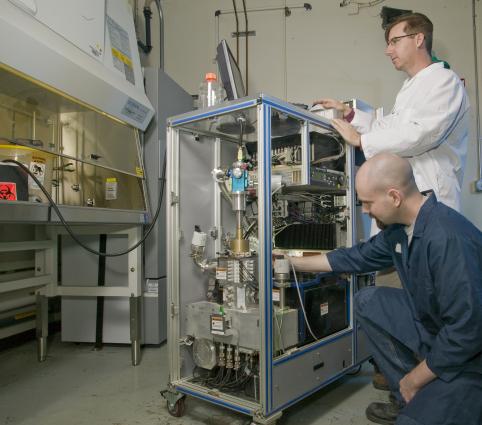 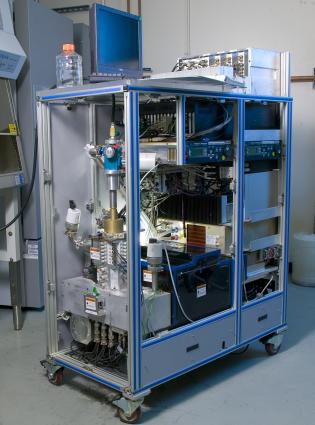 LIVERMORE -- Security and law enforcement officials may some day have a new ally – a universal detection system that can monitor the air for virtually all of the major threat agents that could be used by terrorists.

This type of system is under development by a team of Lawrence Livermore National Laboratory (LLNL) scientists and engineers, and has already been tested in laboratory and field experiments.

In their latest advance, the team has conceptually shown that they can almost simultaneously detect four potential threat materials – biological, chemical, explosives and radiological – along with illicit drugs.

Their work, using a system called Single-Particle Aerosol Mass Spectrometry, or SPAMS, is described in the June 15 edition of Analytical Chemistry , a semi-monthly journal published by the American Chemical Society.

“We believe SPAMS is the only detection instrument that can autonomously detect multiple types of threat agents and trigger alarms within less than a minute,” said Matthias Frank, an LLNL physicist and one of the paper’s co-authors.

“What sets this work apart,” Frank explained, “is that we did our experiments with all these types of threat agents within minutes of each other without reconfiguring the SPAMS instrument.” (In some cases, surrogate materials were used.)

Last spring, the researchers announced that their instrument could perform as a three-in-one detection machine, monitoring the air for biological, chemical and explosive agents.

Since then, the Livermore team has added the capabilities of detecting illicit drugs and powders from radioactive metals. They developed the software capability to assist in detecting metal powders and the algorithms to help detect all four threat agents at one time.

“What we have accomplished,” Steele said, “is to make an instrument that is very sensitive, with a very low false alarm rate, but very fast. That’s unique. Other systems that are just as fast and sensitive have higher false alarm rates.”

In lab experiments, SPAMS was tested against four types of materials terrorists might use -- spores of a non-pathogenic strain of Bacillus anthracis (other strains of this bacteria cause anthrax); diethyl phthalate (a nerve agent surrogate), natural cobalt powder (a surrogate for Cobalt 60 and other radioactive metals) and trinitro-1,3,5-triazinane (RDX, a high explosive). Additionally, it was tested against pseudoephedrine (used to synthesize methamphetamine).

In single- and multiple-agent tests, SPAMS accurately identified each substance and set off the correct alarms within an average of 34 seconds after their release against a background of air as the system was open to the environment. All of the measurements were achieved within 26 to 46 seconds after the compounds’ release.

The two multiple-agent tests involved the use of natural cobalt powder and RDX, and a non-pathogenic strain of Bacillus anthracis and RDX.

In field experiments, SPAMS has been tested at San Francisco International Airport. As part of a background study, the mass spectrometry system analyzed the air for about seven weeks in 2004-05, recording data, though it lacked the capability to set off alarms. The system records were later analyzed in the lab to evaluate whether any alarms, false or real, would have been triggered.

The researchers determined that while a few particles showed up as spores among the almost one million particles studied, there were so few that no alarms would have been triggered.

“What distinguishes SPAMS from other instruments is the high-quality information we receive from the instrument in the form of single-particle mass spectra,” Frank said. “As a result, we get specificity and many fewer false alarms.  We’re very enthusiastic about how the system is working, not only in the lab but also in field tests.”

For the future, the Livermore team would like to develop ways to make the SPAMS machine smaller and less expensive.

They would like to find opportunities for additional field tests, such as at airports, where SPAMS could be used to screen checked and carry-on baggage and at passenger portals. The instrument also could assist in screening people for disease and might help law enforcement authorities in examining suspicious powder samples.

SPAMS started out almost a decade ago as an internally funded project at LLNL headed by Matthias Frank and Eric Gard. It originally only detected biological materials and was called the Bioaerosol Mass Spectrometry (BAMS) system.  As the system gained new capabilities, it was renamed as SPAMS.