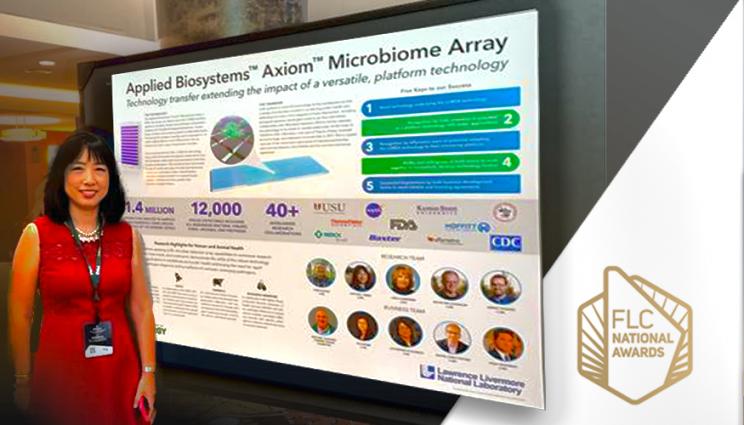 In the nine years since a virtually all-encompassing Lawrence Livermore National Laboratory (LLNL) biological detection system was first introduced, it has become a major hit among technologies.

Now called the Applied Biosystems’™ Axiom™ Microbiome Array (ABAMA), the biological detection technology has attracted more than 30 collaborators, has advanced into the marketplace by Waltham, Massachusetts-based Thermo Fisher Scientific and captured two important awards within the past two years.

Started in 1974, the FLC is a chartered, nationwide network that helps accelerate the transfer of technologies from federal labs into the marketplace. It is comprised of more than 300 federal labs, agencies and research centers. 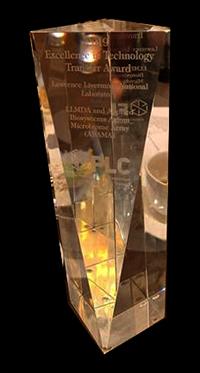 Since 1985, LLNL has garnered 36 national awards for technology transfer from the FLC.

The ABAMA is the commercialized successor to LLNL’s earlier microarray, called the Lawrence Livermore Microbial Detection Array (LLMDA). In 2016, the LLMDA was licensed and went on sale the next year.

The microarray is the most comprehensive microorganism detection platform built to date and the first high throughput microarray that employs whole genome resolution for identifying all sequenced microbes.

When Lawrence Livermore biologists and computer scientists first unveiled the versatile LLMDA in 2010, it could analyze samples for nearly 3,000 bacteria and viruses, all within 24 hours. But it could only analyze four samples a day.

With the 96-well ABAMA, the new detection system can analyze 96 samples in three days. Additionally, each of the 96 wells contain about 1.4 million probes, so samples are analyzed by about 132 million probes.

During its nine-year history, the LLNL biological detection system has been utilized in many ways — to study bacterial pathogens in soldiers’ combat wounds, to investigate microbes aboard the International Space Station, to detect diseases in the swine industry, to detect plague in ancient human remains, to detect impurities in infant vaccines and to study possible emerging viral diseases, among other uses.

Some early versions of the LLMDA have made their way into testing at government agencies and academic institutions, such as the Centers for Disease Control, the Naval Medical Research Center and Kansas State University.

The new arrays, which come in 24- and 96-well formats, can analyze a variety of different sample types and can be used for nutrigenomics, agrigenomics, plus animal research and modeling.

The technology transfer efforts for the LLMDA started in 2013 when a Bay Area company, Affymetrix, approached the Lab about the biological detection system. To advance the technology to a market-ready state, LLNL and Affymetrix set up an 18-month cooperative research and development agreement (CRADA).

At the conclusion of the CRADA in 2016, Affymetrix, now part of Thermo Fisher, licensed the technology and it was released commercially in 2017.

In addition to Crystal Jaing, who heads the Lab’s LLMDA/ABAMA effort and who accepted the FLC award on April 24, other team members have included biologist James Thissen, bioinformaticists Kevin McLoughlin and Shea Gardner (deceased) and retired computer scientist Tom Slezak.

Hannah Farquar is the FLC representative for IPO and the Laboratory.

In November 2017, the LLMDA/ABAMA received an R&D 100 award, an honor dubbed the "Oscar of invention."