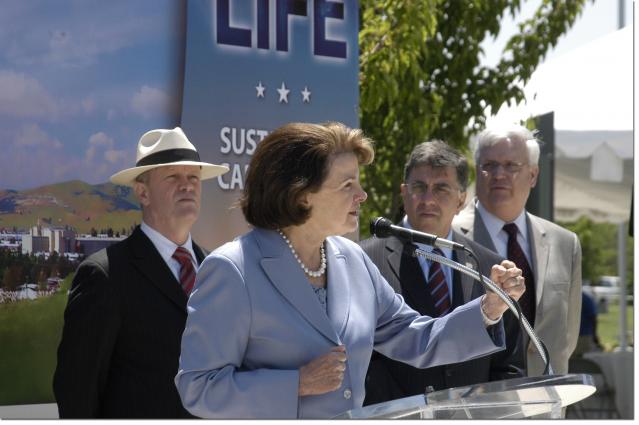 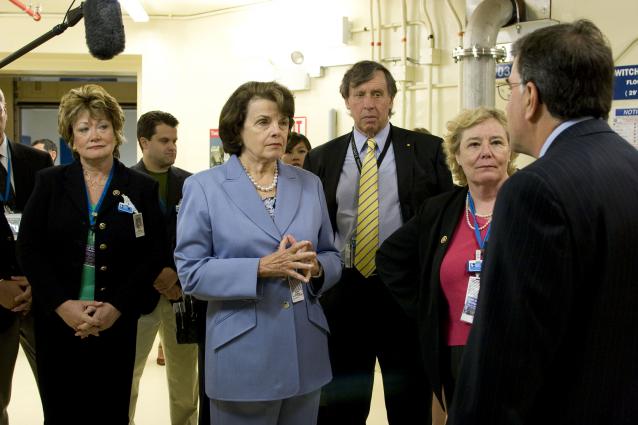 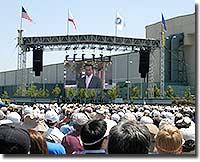 View a montage of media coverage from the NIF dedication.

LIVERMORE, Calif. —With thousands in attendance, the National Ignition Facility (NIF) at Lawrence Livermore National Laboratory was officially dedicated today, setting into motion the next chapter of one of the country's greatest scientific assets.

NIF, the world's highest-energy laser system, consists of 192 laser beams that will focus nearly two million joules of energy and create temperatures and pressures that exist in the cores of stars and giant planets. By harnessing the massive power generated by its lasers, NIF will be able to create conditions and conduct a wide range of experiments never before possible on earth.

Funded by the U.S. Department of Energy's National Nuclear Security Administration, construction of NIF began in 1997 with three scientific missions in mind. Its first mission is to serve as a key component of the National Nuclear Security Administration's Stockpile Stewardship Program to ensure the safety and reliability of the nation's nuclear deterrent without the need for nuclear testing.

"NIF, a cornerstone of the National Nuclear Security Administration's effort to maintain our nuclear deterrent without nuclear testing, will play a vital role in reshaping national security in the 21st century. This one of a kind facility is the only place in the world that is capable of providing some of the most critical technical means to safely maintain the viability of the nation's nuclear stockpile," said Tom D'Agostino, NNSA administrator.

Along with this vital national security mission, NIF also offers the possibility of groundbreaking scientific discoveries in planetary science and astrophysics. By creating the conditions that exist in supernovas, in the event horizons of black holes and in the cores of giant planets, NIF will help unlock the secrets of the cosmos. A large majority of these experiments will be unclassified and will provide a rich source of previously unobtainable data to the world-wide research community.

It is NIF's third mission — energy independence — that has generated the most excitement. Global energy demand, driven by population growth and the aspirations of the developing world, already is straining the planet's existing energy resources. Global demand for electricity is expected to double from its current level by 2030 and then double again by the end of the century. At such a pace, as many as 10,000 new power plants will have to be built to keep up with this demand. Many of these plants will burn non-renewable fossil fuels — coal, oil and natural gas — and in the process release more carbon dioxide into the environment.

As part of the global race to satisfy the world's thirst for energy, NIF will advance a new form of green energy and is scheduled to begin ignition experiments in 2010 that will focus its lasers on a very tiny target filled with isotopes of hydrogen. The heat and pressures created by NIF's lasers will force the hydrogen nuclei to collide and produce a controlled fusion reaction similar to that found in the sun.

"More energy will be produced by this 'ignition' process than the amount of laser energy required to start it. This is the long-sought goal of 'energy gain' that has been the goal of fusion researchers for more than half a century. NIF's success will be a scientific breakthrough of historic significance – the first demonstration of fusion ignition in a laboratory setting, duplicating on Earth the processes that power the stars," said Edward Moses, Director, National Ignition Facility.

"The National Ignition Facility represents the kind of versatile big science that defines Lawrence Livermore National Laboratory as a world-class scientific institution. The laser fusion project will not only help ensure the safety and reliability of the nation's nuclear deterrent, but will help lay the foundation for fusion energy and provide valuable insights into the very nature of the universe," said Ellen Tauscher, U.S. Representative, California, 10th District.

"This laser system is an incredible success not just for California, but for our country and our world," said Governor Schwarzenegger. "NIF has the potential to revolutionize our energy system – teaching us a new way to harness the energy of the sun to power our cars and homes. California was the home of the first working laser, so it is no surprise that the Golden State has produced the world's largest and most powerful one."

"A successful demonstration of ignition and energy gain at NIF would be a transforming event that would solidify fusion's potential as an important energy source. The dedication of NIF is a milestone in an exciting scientific journey that will create a lasting legacy of discovery, innovation, and security and allow the nation to reap the benefits of this visionary investment in its future," said Steven Koonin, Under Secretary for Science, U.S. Department of Energy.

"The state of California has long served as an incubator of science and technological advances for the nation - and the world. The National Ignition Facility at Lawrence Livermore National Laboratory will further that leadership role in the 21st Century and promises to blaze a new trail toward sustainable, carbon-free energy independence," said U.S. Senator Dianne Feinstein, CA.

"Lawrence Livermore National Laboratory has a long history of solving some of the nation's greatest scientific challenges. From national security and continuing terrorist threats to breakthroughs in advanced medical technologies, this laboratory has consistently made dramatic scientific contributions that directly benefit the American people. Very shortly we will engage in what many believe to be this nation's greatest challenge thus far, one that confronts not only the nation but all of mankind -- energy independence. I have no doubt that as in the past; this laboratory will again rise to the occasion and put forth a solution that exceeds expectations," said George Miller, Director, Lawrence Livermore National Laboratory.

"Here, in this facility, we see first-hand how interdisciplinary innovation in science and technology is applied to solve large, complex and challenging problems of national importance. The University of California takes great pride in its long association with Lawrence Livermore Laboratory. From the very beginning, UC faculty have served as advisors and reviewers of the Lab's laser programs and will continue as NIF moves into its next phase," said Mark Yudof, president, University of California.

"The Lawrence Livermore National Laboratory has led the world in laser fusion research since the early 1960s, and the National Ignition Facility ensures America's continued excellence in a field of crucial importance to our nation. The research that will take place here at the National Ignition Facility has the potential to transform how we use energy," said Jerry McNerney, U.S. Representative, CA, 11th District.