This is a representative outcropping of what many of the team’s sampling locations look like in the Deccan Traps region of India. The red band in the rock outcropping is what is informally termed a “red bole,” essentially an ancient soil developed during a hiatus in volcanism between the underlying (older) lava flow and overlying (younger) lava flow.

Not by meteorite alone did the dinosaurs die off.

Lawrence Livermore National Laboratory (LLNL) research scientist Kyle Samperton and colleagues present the most compelling evidence yet that massive volcanic eruptions in the Deccan Traps region of India contributed to the fall of the dinosaurs — also known as the end-Cretaceous mass extinction — approximately 66 million years ago. The research appears in the Feb. 21 edition of Science.

Samperton’s team exhibits the most precise Deccan eruptive timeline yet, aligning the dinosaur extinction with massive volcanic events that occurred around the same time of the Chicxulub meteorite impact in Mexico. The meteorite impact has long been viewed as the primary (if not sole) cause of the mass extinction at the Cretaceous-Paleogene boundary, the geological moment when many creatures from the age of dinosaurs vanish from the fossil record.

However, the team’s new findings suggest Deccan eruptions were highly nonlinear, with four major volcanic pulses. According to their eruptive age model, the largest of these volcanic pulses immediately precedes the mass extinction event with an approximate 90 percent probability. 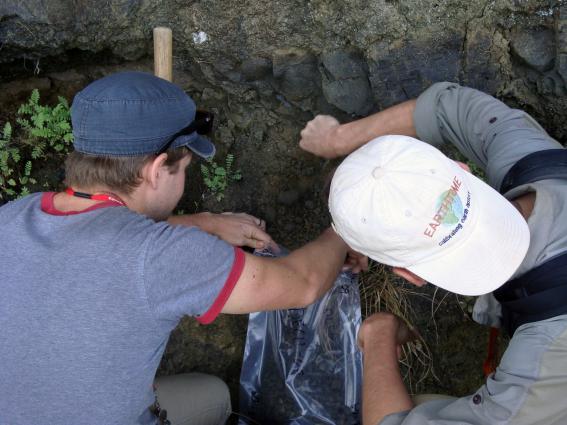 "This is one of the biggest one-two punches in Earth’s history, with two remarkably rare and destructive events occurring contemporaneously," Samperton said. "It’s no wonder life didn’t do so well at the time."

Earlier research by the team found that by analyzing ratios of uranium and lead isotopes in the mineral zircon (an analytical technique called uranium-lead geochronology), the team was able to determine that Deccan volcanoes began their main eruptions roughly 250,000 years before the extinction. For the next 750,000 years, the volcanoes unleashed about 80-90 percent of the Deccan Traps’ total lava flows and were ongoing at the time of the end-Cretaceous mass extinction.

If one were to look at the other major mass extinctions in the past 500 million years of Earth history (largely since the rise of life as we know it), they tend to not correlate with any known meteorite impacts. However, extinctions do correlate strongly with what geologists call "continental flood basalt volcanism," another way of saying massive, catastrophic volcanic eruptions. As opposed to a single volcano, continental flood basalts occur over enormous areas, typically blanketing hundreds of thousands of square kilometers, with total erupted lava thicknesses of 1-2 kilometers.

"And when I say massive, I mean massive, as well as being long-lived," Samperton said. "As a general rule of thumb, flood basalt volcanism involves the eruption of more than 1 million cubic kilometers of lava over several hundred thousand years. This is akin to having a 1980 Mount St. Helens-size eruption every year for 500,000 years straight, on average. However, in the case of the Deccan Traps, there were periods when it was significantly direr, because of the pulsed nature of Deccan magmatism."

Volcanoes spew both sulfur dioxide, which cools the atmosphere on short timescales, and carbon dioxide, which warms the atmosphere on long timescales. Because the Deccan eruptions were pulsed, whenever an eruptive pulse occurred (for example, just before the Cretaceous-Paleogene boundary and extinction), it would likely have resulted in extreme short-term cooling, followed by long-term warming.

"Such dramatic shifts in atmospheric temperature can be catastrophic for delicately balanced ecosystems," Samperton said. "Our data are strong evidence for highly nonlinear eruption rates over the volcanic province’s lifetime. This finding confirms what researchers have long suspected regarding the tempo of flood basalt eruptions, but until now had never had conclusive data for."

The research was funded by the U.S. National Science Foundation and the Princeton Department of Geosciences’ Scott Fund. 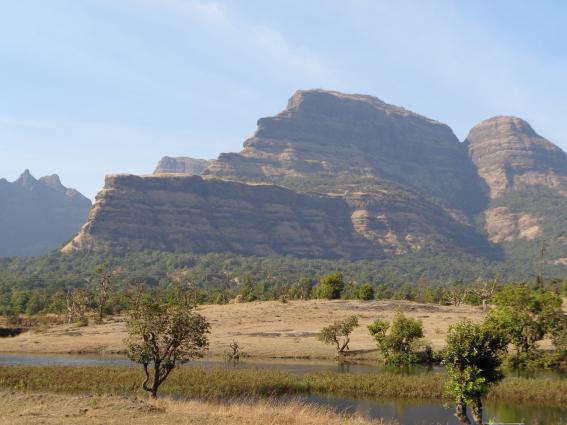