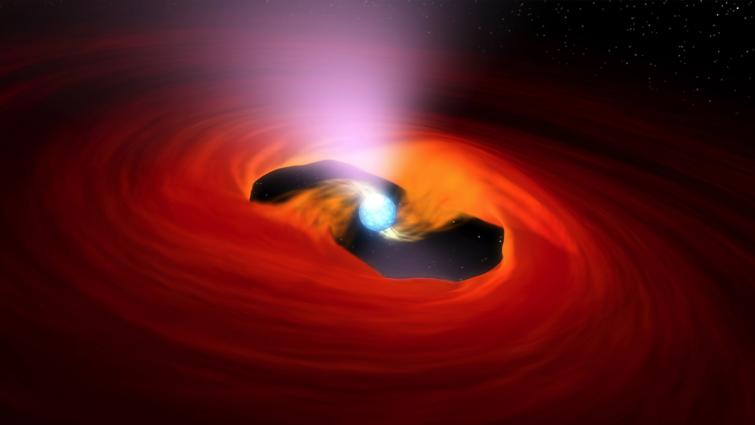 This neutron star -- the core of a star that exploded in a massive supernova -- is known as a pulsar because it sends out rotating beams of X-rays. Image credit: NASA/JPL-Caltech 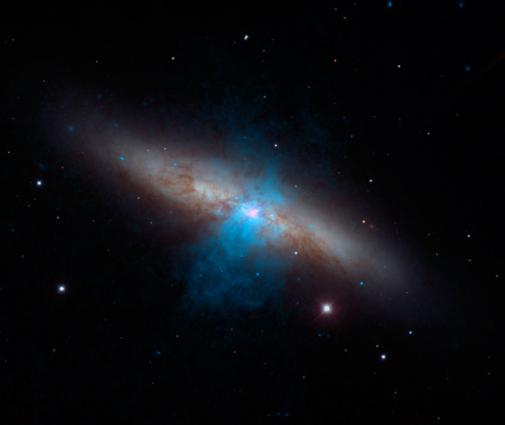 High-energy X-rays streaming from a rare and mighty pulsar (magenta), the brightest found to date, can be seen in this new image combining multi-wavelength data from three telescopes. The bulk of a galaxy called Messier 82 (M82), or the "Cigar galaxy," is seen in visible-light data captured by the National Optical Astronomy Observatory's 2.1-meter telescope at Kitt Peak in Arizona. Starlight is white, and lanes of dust appear brown. Low-energy X-ray data from NASA's Chandra X-ray Observatory are colored blue, and higher-energy X-ray data from NuSTAR are pink.

A supernova is the cataclysmic death of a star, but it seems its remnants shine on.Astronomers have found a pulsating, dead star beaming with the energy of about 10 million suns.

This is the brightest pulsar -- a dense stellar remnant leftover from a supernova -- ever recorded, and was seen using NASA's Nuclear Spectroscopic Telescope Array, or NuSTAR.

LawrenceLivermore LLNL researchers were involved in the design and testing of the NuSTAR X-ray optics.

"You might think of this pulsar as the 'Mighty Mouse' of stellar remnants," said Fiona Harrison, the NuSTAR principal investigator at the California Institute of Technology in Pasadena, California. "It has all the power of a black hole but with much less mass."

Pulsars belong to a class of stars called neutron stars. Like black holes, neutron stars are the burnt-out cores of exploded stars, but puny in mass by comparison. Pulsars are neutron stars that send out beams of light. As the star spins, these beams intercept Earth-like lighthouse beacons, producing a pulsed signal.

The discovery is helping astronomers better understand mysterious sources of extreme X-rays, called ultraluminous X-ray sources, or ULXs. Before now, all ULXs were thought to be actively feeding black holes. In a new report in the Oct. 9 issue of Nature, data from NuSTAR show that at least one ULX, about 12 million light-years away, is not a black hole but a pulsar.

"The pulsar appears to be eating the equivalent of a black hole diet," Harrison said.

ULXs are generally thought to be black holes feeding, or "accreting," off companion stars. While most are thought to have masses up to 50 to 100 times that of our sun, some ULXs are suspected to be even heftier. Researchers are trying to determine if these larger black holes are indeed the long-sought "medium-size" black holes -- missing links between smaller, stellar-size black holes and the gargantuan ones that dominate the hearts of all galaxies.

NuSTAR didn't initially set out to study the two ULXs in the Messier 82 (M82) galaxy, or "Cigar," galaxy. It had been observing a recent supernova in M82, when astronomers serendipitously noticed bright X-rays coming from a point nearby -- what turned out to be the ULX called M82 X-2. The NuSTAR team was shocked to find that this source had a pulse. Black holes don't pulse, but pulsars do.

NASA's Chandra X-ray Observatory and Swift satellite also had been monitoring M82 to study the same supernova and were able to confirm that the intense X-rays of the ULX called M82 X-2 were coming from a pulsar.

The key to NuSTAR's discovery was its sensitivity to X-rays in the highest-energy ranges, as well as its ability to time the arrival of X-rays. This timing capability allowed the astronomers to measure a pulse rate from M82 X-2 of 1.37 seconds. They also measured its energy output at the equivalent of 10 million suns, or 10 times more than what was measured before -- a big punch for something about the mass of the sun.

How is this dead star radiating so feverishly? Astronomers aren't sure, but they say it is likely due to a lavish feast of the cosmic kind.

In the future, the NuSTAR researchers also will look at more ULXs, and it's possible they could turn up more pulsars. At this point it is not clear if the M82 X-2 is an oddball, or if perhaps more ULXs beat with the pulse of dead stars.

NuSTAR is a Small Explorer mission led by the California Institute of Technology in Pasadena and managed by NASA's Jet Propulsion Laboratory, also in Pasadena, for NASA's Science Mission Directorate in Washington D.C.