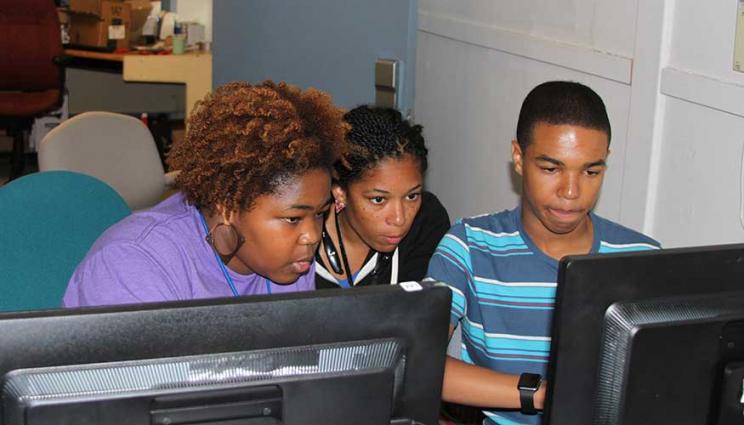 Against the backdrop of the Office of Personnel Management (OPM) breach, the 2015 edition of the Laboratory’s Cyber Defenders internship offers an especially compelling introduction to cybersecurity for students who may soon serve on the front lines of cyberdefense.

"Chaos," was how Henry Williams, a graduate at North Carolina Agricultural and Technical University, characterized his experience in Cyber Defenders three years ago. "But that’s how cybersecurity is in the real world. Cyber Defenders is a dense schedule of classes, seminars, presentations, meetings, a poster session and capture the flag team challenge. It’s a two-month boot camp, but in a fun way." 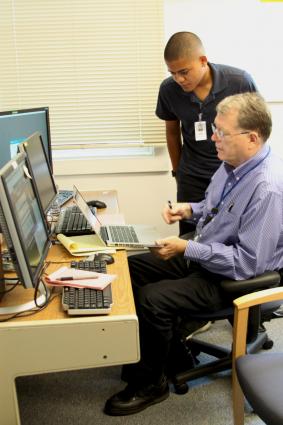 Now a Lab employee working on his graduate degree, also at North Carolina A&T, Williams works in LLNL’s Information Technology Solutions group as a cybersecurity specialist and now mentors Cyber Defender students. As an undergraduate in 2012, he was one of two Cyber Defender students to achieve Department of Homeland Security (DHS) certification. "It was intense and exciting," he said, recalling days that went as long as 14 hours.

"I knew this is where I wanted to work," said Williams, wearing a ‘talk nerdy to me’ T-shirt. "I love the environment; it’s inviting, the people are friendly and it’s laid back. But, you’re expected to get your job done.

"Today, my projects are mission critical and are completely different each year. I wanted a job where I could contribute to national security in a real way," he said. With the OPM breach a topic of daily discussion, he added that "the job of our team is to make sure that never happens again." 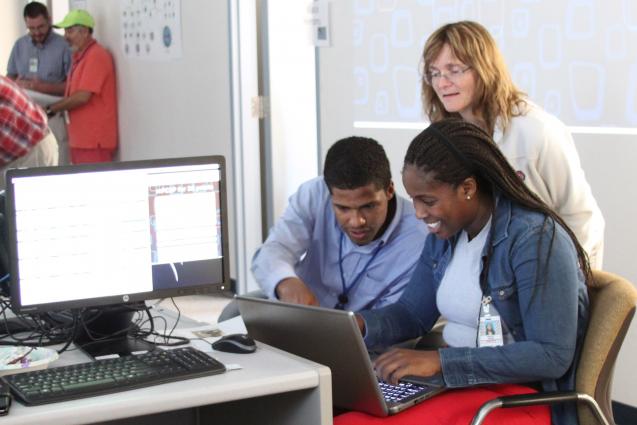 Kristine Monteith, now a cybersecurity researcher in the Global Security Principal Directorate, said she did not have a particular interest in the topic when in 2010, Darrel Whitney of Computation, whom she met at a Brigham Young University job fair, persuaded her to apply to the Cyber Defenders program. A computer science student specializing in machine learning and with an interest in music, Monteith was intrigued by the Cyber Defenders experience.

"Cyber Defenders was a lot of fun and cybersecurity was an interesting domain to learn about," she said. "I loved the people and met some fascinating individuals. Working in teams, it was interesting to see how different people approach the same problem."

The daughter of a Lab researcher who was born and raised in Livermore, the decision to work at the Lab was easy for Monteith, who completed her Ph.D. in 2012. "This is a great environment with great people, interesting problems and respect for work-life balance. Best of all, I work on problems that make a difference."

Jasmine Bowers learned about Lawrence Livermore while attending a conference in 2013 as a computer science undergraduate at Fort Valley State University in Georgia. The native of Charlotte, North Carolina, was invited to the Lab by Tony Baylis, now director of the LLNL Office of Strategic Diversity Programs, that summer and joined the Cyber Defenders program in which she continues to participate.

"I had not thought about cybersecurity as a career, but I was open to new opportunities and experiences," said Bowers, who completed her master's  degree at North Carolina A&T and is now working on her Ph.D. at the University of Florida. "Today, I know cybersecurity is the field I will be in for a while."

Bowers said she likes the structure of Cyber Defenders, as it exposes students to the many facets of cybersecurity and then allows them to test what they’ve learned in the annual "capture the flag" competition that is a highlight of the program. "The real world applications we learn are phenomenal," she said. "I like being able to collaborate and to bounce ideas off of and learn from other students."

Over the years Bowers, Monteith and Williams have been associated with Cyber Defenders they said the essence of the program has remained much the same, but with added resources and new elements relevant to evolving cybersecurity threats introduced each year. Cyber Defenders now has an established facility in Bldg. 219.

"We’re pushing the state of the practice," said Matarazzo. "We are working to make a new ‘capture the flag’ competition engine that is more realistic with social, legal and infrastructural elements the challenges don’t currently have."

Cybersecurity in the real world involves more than technical skill, but also requires working within a legal and ethical framework, Matarazzo said.

A new element introduced this year was a team competition to produce a cybersecurity awareness video, she said. The idea is to promote teamwork and have students think about different aspects of cybersecurity.

Wade Williamson of Vectra networks told students cybersecurity is a dynamic field that requires constant learning, the acquisition of new skills and anticipation of future cyberthreats. "Cybersecurity is often finding something that’s invisible and finding vulnerabilities in technologies that haven’t been invented yet," Williamson said. "Cyber is how power struggles are carried out in today’s world."

Cyber Defenders by the numbers

This summer’s Cyber Defenders program hosted 38 participants including seven high school students and three faculty members. But of the 38, 11 are repeats leaving 27 first-time students. The program received some 600 responses to its Jobvite system call, though only a subset of those were selected to apply.

About 150 students have gone through the program since its creation in 2009. Because of repeats, a precise number is difficult to pinpoint.

LLNL has hired at least 10 employees who were cyberdefenders. According to the anecdotal evidence Celeste Matarazzo has collected via LinkedIn and Facebook most of the cyberdefenders who have gone through the program and who join the workforce remain in the security field. Many elect to pursue a higher degree.