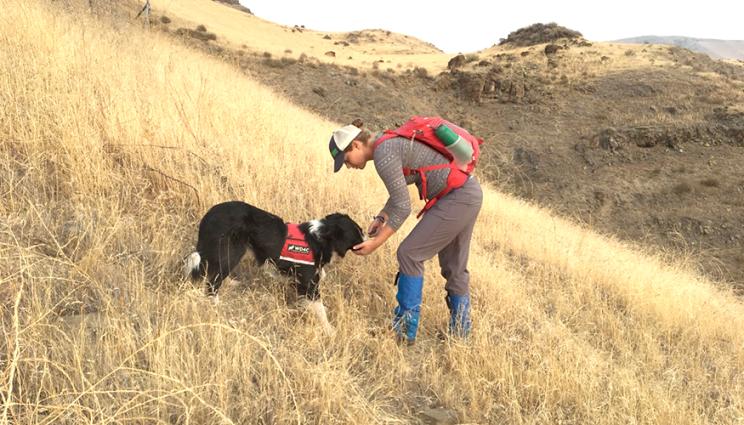 LLNL partnered with Working Dogs for Conservation to conduct San Joaquin kit fox surveys at Site 300. Many of them rescued, scat detection dogs are trained to detect the scent of certain hard-to-track animals, like the San Joaquin kit fox, to see if they have been on site. Photo by Lisa Paterson/LLNL.

From the rolling hills of Tracy to the grassy plains of Livermore, LLNL’s lands are replete with biodiversity, and keeping track of the resident flora and fauna is no small feat.

Located at the intersection of Coastal and Central Valley environments, the Livermore Valley and surrounding hills attracted early botanists and wildlife biologists from UC Berkeley and the California Academy of Sciences studying biodiversity in the state.

Because of the diversity of special status plants, animals and habitats that occur at LLNL sites, an analysis of potential impacts to protected species and habitats is an important part of the Lab’s latest Sitewide Environmental Impact Statement (SWEIS).

To tackle this monumental task, a cross-Lab team with members from ES&H, Supply Chain Management (SCM) and the Office of the Chief Financial Officer (OCFO) came together from 2018 to 2022 to manage subcontracts with expert wildlife biologists and botanists, who would complete the required habitat, rare plant and wildlife surveys.

“This project took a lot of collaboration between our organizations, and we had a really great team,” said Kelly Trabert, group manager for SCM’s Commercial Goods and Services team.

As Lab staff and subcontractors worked to prepare the draft SWEIS, last-minute changes meant that the business side of the required wildlife surveys needed to be managed in-house instead of by an external firm. Pulling together expertise from across the Lab, LLNL ecologist Lisa Paterson (ES&H) and LLNL wildlife biologist Caleb Murphy (ES&H) partnered with Trabert (SCM), contract analyst DeeAnna Hill (SCM) and resource analyst Laura O’Brien (OCFO).

“We needed their expertise to make sure contracting was completed according to Lab policies and procedures and the project stayed on schedule,” Paterson said of the contracting team. “We really relied on their support.”

Environmental consultants surveyed the LLNL Remote Test Site (Site 300), the Livermore Site and the area surrounding the Arroyo Mocho Pumping Station, which provides drinking water to LLNL’s Livermore Site. Their results provided background information for the analysis of potential impacts to protected species and habitats completed as part of the SWEIS.

The surveys used both high- and low-tech methods.

ECORP Consulting Inc. used acoustic monitoring to passively search for rare bat species at Site 300, deploying Wildlife Acoustics SM4BAT-FS units with SMM-U2 microphones in multiple locations to record bat acoustics as full-spectrum WAV files. They then used specialized software to analyze the WAV files and determine which bat species were present. The 14 species of bats recorded at Site 300 during these surveys include four rare species: the pallid bat, the western red bat, Townsend’s big-eared bat and the western mastiff bat.

The ECORP team also used an extensive array of remote infrared cameras to find large- and mid-sized carnivores at Site 300, baiting each camera with a predator attractant and a can of cat food. Two species considered rare in this area, the American badger and the mountain lion, were targets of the camera surveys. Although images of several American badgers were captured, no mountain lions were observed during the SWEIS surveys. Mountain lions have previously been observed at Site 300, but this species has very large home ranges and can be very elusive in its natural habitat.

As if existing challenges weren’t enough, the COVID-19 pandemic and historically bad air quality resulting from wildfires threatened to impact the survey schedules. But because the work was conducted outside and was essential to the completion of the SWEIS, surveys were allowed to continue during the shutdown.

In a massive collective effort, the team completed the surveys underbudget and on time for the Nov. 4, 2022, release of the draft SWEIS for public review.

“We thank Paterson and her team of experts for providing outstanding support to the SWEIS by providing the results of the surveys and conducting reviews of biological impacts analyses sections," said the LLNL SWEIS Project Manager Hank Khan.

But the group’s efforts didn’t stop there. In a move rarely seen, the hyper-efficient team returned the balance of their funding to DOE. This caught the attention of O&B Principal Associate Director Cynthia Rivera, who presented them with an award of recognition in November.

Trabert and Hill were pleased that the project was able to tap into local small businesses to conduct the surveys, including many that are women-owned. They noted that this practice brings the Lab closer to reaching socio-economic goals while providing great services.

The interdisciplinary group was in constant communication and worked well together, exemplifying successful cross-team collaboration, which is one of O&B’s strategic goals.

“[The SWEIS biological survey team] hit the ground running and really helped us to get this thing done,” Murphy said. “This prevented us from having to delay the SWEIS.”