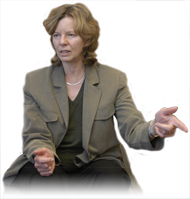 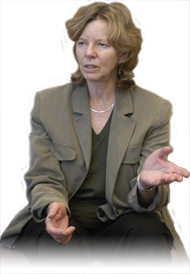 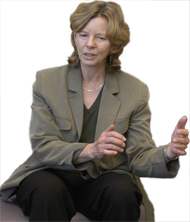 A Conversation With... Cherry Murray

(Editor’s note: The transition to management by Lawrence Livermore National Security has brought a few new as well as some familiar faces to the Lab's senior management. Newsline features "A Conversation with…" a series of profiles on the Laboratory’s new leadership. This week, meet Cherry Murray.)

First job: My mother taught oil painting and when I was 10-12 years old, she paid me to carry around paints and supplies to the students.

How did you learn to multitask: I learned at a very early age that I could read upside down. So when I was tutoring students, they could look at their schoolbook and I could read it at the same time without them having to turn it toward me.

Work philosophy: I agree to do tasks because I really want to accomplish something, but I’ll say no to things I know I just don’t have time to get to. But I haven’t quite mastered saying no yet.

Best decision: Professionally, deciding to work at Bell Labs from 1978 to the early 80s. It was a no brainer to take the job. It was heaven on earth for a research scientist. Personally, the other decision was that nine years after I got my Ph.D., my husband and I decided it was time to start a family, and a year later my son was born and five years after that my daughter was born. It’s just been fantastic.

Worst decision: In 2001-2002, in the telecommunications bust, we went through a severe money crunch at Bell Labs. When my postdoc graduated to an academic job, I quit doing my own research as I felt I could not fund a new postdoc for me as a senior vice president when bench scientists didn’t have one. It’s the one decision that I regret the most. It’s hard as a scientist to give up your research.

Career highlight: Working at Bell Labs in the early 1980s. It was really a fun time. In those years, Bell Labs Physical Sciences Research won three Nobel prizes in succession; we had outstanding people doing great things. It was a real pleasure. We had enough money. The hardest thing was to figure out strategically what research to fund with the money.

Career low point: The low point came years later in 2002 when 60 percent of our budget was cut. Many fine scientists and engineers in research were laid off. The company was split apart into several parts and I had the job of deciding which people went to which company.

Word or phrase that best describes you: Responsible.

Interests/hobbies: Hiking in the area’s open spaces. My husband and I have two border collies and they need to do a lot of running every day. I used to run, but my back has decided that I don’t run anymore. So I go walking with them on weekends.

Favorite book/movie: I really like science fiction so for a book I would say Frank Herbert’s "Dune" and for a movie I have to say "2001: A Space Odyssey" or "Gattica." Favorite cartoon character: Dilbert. I’m not like any of those characters but I do see humor in what they do, especially in the management books. When I was working at Bell Labs, the situations were dead-on. It was exactly like what was going on.

Superpower you would like to have: One really cool super power would be to be able to stop the world for everyone but me — so I could catch up. Actress you’d want to play you in a movie: Helen Mirren. She’s a fantastic actress.

Favorite food: I know it sounds funny, but salad. I love fresh fruits and vegetables. I also like spicy food. The hottest food I’ve ever eaten was in Bangkok. I could only eat a little of it. But my father ate it all and later his lips peeled. It tasted fantastic, but it was very dangerous.

Pet peeves: I do not like some fonts, especially really big or really spidery fonts. They really irritate me.

Best vacation ever: This is actually a tie. The first was a backpacking trip to the Chicago Basin that my husband and I took with my father when he was 70. We climbed two 14,000-foot peaks and at the top of one of them, there was this tremendous hail storm. But it was an amazingly good trip. The other came after my freshman year at MIT. My father was working in the embassy in Jakarta and I visited my parents for the summer. It took three days, with stops in Fiji and Sydney just to get to Jakarta. I went on a train trip with a friend throughout Java. Then I went to Malaysia, Bali, Singapore and Hong Kong with my family. It was a memorable trip.

How do you deal with stress: Exercise — working out with weights and walking. I also use my elliptical trainer 30 minutes a day after work. It’s easy on one’s back.

Best piece of advice you’ve received: In high school, I was trying to decide between being an artist or going into physics. My older brother at the time was a graduate student in physics at MIT and he said "There’s no way you’ll make it in physics at MIT." That was a challenge for me. So I went to MIT and majored in physics. Of course, now my brother says he can’t remember every saying that to me.