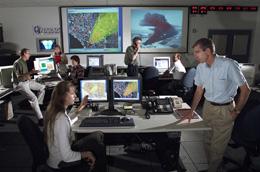 In a boost for homeland security, the National Atmospheric Release Advisory Center (NARAC) will soon be able to track and predict the movement of chemical and biological agents and other hazardous material indoors as well as outdoors.

“NARAC is a widely used tool for pre-event emergency planning,” said LBNL project leader Ashok Gadgil, “but planners currently only have information about outdoor concentrations. This new capability will give planners and emergency commanders access to accurate, real-time estimates of indoor and outdoor toxics concentrations, which provide a basis for informed evacuation decisions.

“Remaining indoors can be much safer than trying to evacuate,” Gadgil said. “The improved NARAC system will finally provide data on which to base these decisions.”

The NARAC enhancement is part of an LBNL-led program to minimize casualties in buildings and transportation facilities from both outdoor and indoor releases of chemical or biological weapons.

Inspired in part by the October 2001 anthrax mailings, the multi-lab effort is aimed at helping the nation’s building managers, emergency planners and first responders understand how to prepare
for and counter a weapons of mass destruction or WMD, attack. The project, which also involves Sandia National Laboratories and the University of California at Berkeley, recently received a 2004 Federal Laboratory Consortium award for excellence in technology transfer.

NARAC provides an automated, state-of-the-art atmospheric modeling capability that can predict the movement of nuclear, radiological, chemical and biological releases in the atmosphere and estimate their potential effect on exposed populations.

While NARAC has traditionally focused on outdoor releases, “the Berkeley lab team’s specialty is indoor aerosol transport and fate,” said NARAC’s Gayle Sugiyama. “We are collaborating with them on developing building infiltration modeling capabilities to predict indoor concentrations from outdoor releases and integrating them into the NARAC system.”

To create the models, the team compiled air infiltration measurements from 70,000 homes and developed a statistical method to predict the distribution of air infiltration for every 8,000-resident census tract in the United States. A key feature of the model is that predictions can be made for particularly “leaky” or “tight” houses as well as typical houses in each area.

Sugiyama said a new infiltration model for residential buildings is now being tested, and the team recently began work on an approach for treating commercial buildings.

The project also provides advice for building operators through its “Secure Buildings” Website (http://securebuildings.lbl.gov/ ), which has had thousands of visitors viewing more than 40,000 pages since early 2002. The LBNL team worked with Sandia to provide recommendations to airport managers on preparation, training and event response; and it created first responder training materials for the California Peace Officers Standards and Training Agency, which has used the materials to train police officers throughout the United States.

“These efforts have improved the readiness and safety of the nation’s police officers, the security of the nation’s buildings and their inhabitants, the effectiveness of local emergency response, and the safety of the U.S. air transportation network,” Gadgil said. “A major attack may still have consequences, but they will be lessened because of the project’s scientific work and outreach.”

NARAC, a U.S. Department of Energy (DOE) operational asset, supports the Nuclear Incident Response Teams, the Federal Radiological Monitoring and Assessment Center, the Department of Homeland Security (DHS) under a DOE-DHS memorandum of agreement, and 40 DOE and Department of Defense on-line sites, as well as a number of state and local agencies. The NARAC system includes both stand-alone local plume modeling tools for end users’ computers, and Web- and Internet-based software to provide access to advanced modeling tools and expert analysis from the national center at LLNL.

The Federal Laboratory Consortium is a nationwide network of more than 600 national laboratories from 16 federal agencies that recognizes outstanding work in transferring technology from the labs to the public and private sectors.