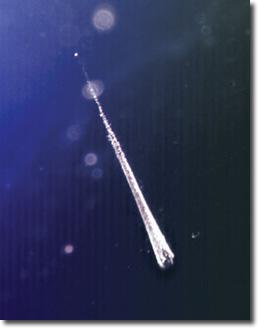 A track of comet dust captured in aerogel, the Livermore-developed material that was used aboard the Stardust spacecraft to trap cometary particles. 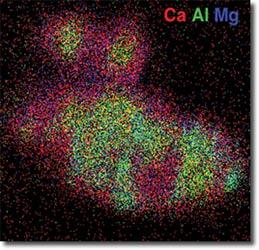 Stardust fire and ice: Livermore scientists were able to determine that this tiny mineral is osbornite using X-ray fluorescence maps (above) and backscattered electron images (below). Osbornite forms much closer to the sun than where Comet Wild 2 formed on the outskirts of Neptune.

LIVERMORE, Calif. — Particulate materials captured from the comet Wild 2 have revealed new clues about the birth of our solar system. The findings counter some basic theories about how the solar nebular is gently collapsing inward to form the sun and the planets.

The thousands of samples of dust gathered by the Stardust spacecraft mission tell a story of a comet that formed in the Kuiper Belt, outside the orbit of Neptune, and only recently entered the inner regions of the solar system.

Wild 2 spent most of its life orbiting in the Kuiper Belt, far beyond Neptune, and in 1974 it had a close encounter with Jupiter that placed it into its current orbit. The Stardust spacecraft’s seven-year mission returned to Earth earlier this year with particles that are the same material that accreted, along with ice, to shape the comet about 4.57 billion years ago, when the sun and planets formed.

But during its lifetime, Wild 2 gathered material that formed much closer to the sun.

“We’re talking about a mineral that forms around 3,000 degrees Kelvin, which means it formed close to the hot infant star,” said John Bradley, director of the Institute for Geophysics and Planetary Physics at Lawrence Livermore National Laboratory (LLNL) and the head of the Livermore Stardust team. “If we found it in the comet, then how the heck did it get out there?”

The mineral in question is osbornite, which has been found on Earth only in Russia.

More than 200 investigators worldwide, including researchers from LLNL, will publish several papers in a series of analyses of the space dust in the Dec. 15 issue of the journal Science .

Using state-of-the-art technology, LLNL scientists have been able to determine the makeup of the tiny particles at the angstrom scale using the SuperSTEM (scanning transmission electron microscope). An angstrom is one ten-billionth of a meter.

The osbornite finding is an indication that during its infancy, the solar system was a very volatile locale in which objects in the inner area may have been ejected in bipolar outflows perpendicular to the solar accretion disc and rained down into the outer regions.

“It appears to have been a much more dynamic and perhaps even violent nebula environment than we expected,” Bradley said.

And it is this mixing of the solar system that initially had scientists scratching their heads. In addition to outer solar system materials, the comet samples also contain pre-solar materials that in turn mean they must have been transported beyond the orbit of Neptune by a process that was capable of moving particles at least as large as 20 microns (a micron is 10 times smaller than a human hair).

The osbornite discovery supports the theory that large particles could be launched by a type of wind from a region within a few radii of the young sun and be transported ballistically above and below the midplane of the nebular disk. This wind model would transport these hot-formed particles from near the sun to the edge of the solar system, where Wild 2 formed.

Most of the particles larger than a micron are made up of the silicate minerals olivine and pyroxene, also minerals that form at very high temperatures.

“It’s shaking up our view of the solar system condensation process,” said Hope Ishii, one of the Livermore Stardust researchers. “It’s been pretty intense. It opens up a whole bunch of new questions.”

In addition to the SuperSTEM, LLNL researchers used the Laboratory’s secondary electron microscope, nanoSIMS and Focused Ion Beam (FIB) technology to analyze the dust particles. Using the FIB, Livermore researchers Giles Graham and Nick Teslich were the first scientists to detect the craters containing miniscule particles in the collector foil. The foils contained the only examples found thus far of presolar material.

In addition to silicates and sulfides, Stardust samples contain organic materials dispersed around the impacts.

“We didn’t expect any organics to survive” from the impact and heat during the collection process, said Livermore researcher Sasa Bajt. “But we found a rich variety of organics that were both oxygen-rich and nitrogen-rich compared to organics previously found in meteorites.”

And those organics could point to the beginnings of life on Earth.

Stardust is part of NASA’s series of Discovery missions and is managed by the Jet Propulsion Laboratory in Pasadena, Calif. Stardust launched in February 1999 and set off on three giant loops around the sun. It began collecting interstellar dust in 2000 and met Wild 2 in January 2004, when the spacecraft was slammed by millions of comet particles, nearly halting the mission. It is the first spacecraft to safely make it back to Earth with cometary dust particles in tow.

Cosmic dust could helpuncover the origins of life
&#8220;Seeing the Universe in a Grain of Dust&#8221;
&#8220;Novel Materials from Solgel Chemistry&#8221;
LLNL&#8217;s Institute for Geophysics and Planetary Physics
NASA/JPL&#8217;s Stardust Website