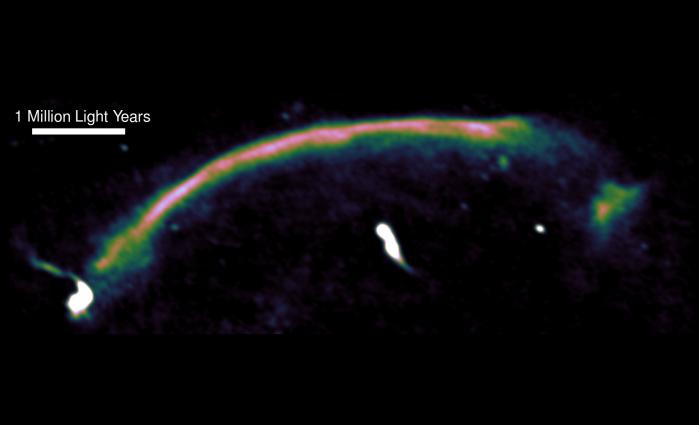 A radio image highlights a shock wave — seen here as the bright arc running from bottom left to top right — in the 'Sausage' merging cluster of galaxies. The shock wave was generated 1 billion years ago, when the two original clusters collided, and is moving at a very high speed of 9 million kilometers per hour. The radio image was made using the Giant Metrewave Radio Telescope. Credit: Andra Stroe

Comatose galaxies shocked back to life

Galaxies are often found in clusters, which contain many "red and dead" members that stopped forming stars in the distant past. Now an international team of astronomers, including Will Dawson of Lawrence Livermore National Laboratory, has discovered that these comatose galaxies can sometimes come back to life. If clusters of galaxies merge, a huge shock wave can drive the birth of a new generation of stars — the sleeping galaxies get a new lease on life.

Galaxy clusters are like cities, where thousands of galaxies can be packed together, at least in comparison to the sparsely populated space around them. Over billions of years, they build up structure in the universe — merging with adjacent clusters, like growing cities absorb nearby towns. When this happens, there is a huge release of energy as the clusters collide. The resulting shock wave travels through the cluster like a tsunami, but until now there was no evidence that the galaxies themselves were affected very much.

The team, led by Andra Stroe of Leiden Observatory and David Sobral of Leiden and the University of Lisbon, observed the merging galaxy cluster CIZA J2242.8+5301, nicknamed the 'Sausage,' located 2.3 billion light years away in the direction of the constellation of Lacerta in the northern hemisphere of the sky. They used the Isaac Newton and William Herschel Telescopes in La Palma, and the Subaru, CFHT and Keck Telescopes in Hawaii, and found that far from ‘watching from the back,’ the cluster galaxies were transformed by the shock wave, triggering a new wave of star formation.

The research appears in the April 24 edition of the journal, Monthly Notices of the Royal Astronomical Society.

"We assumed that the galaxies would be on the sidelines for this act, but it turns out they have a leading role," Stroe said. "The comatose galaxies in the Sausage cluster are coming back to life, with stars forming at a tremendous rate. When we first saw this in the data, we simply couldn’t believe what it was telling us." 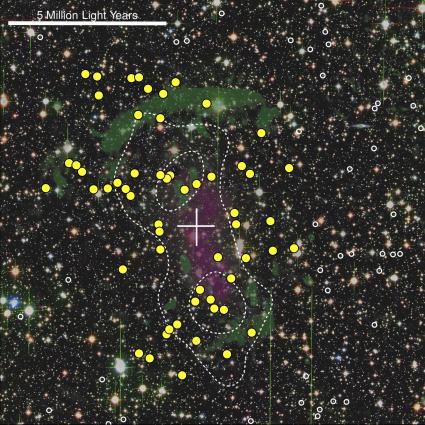 The new work implies that the merger of galaxy clusters has a major impact on the formation of stars. "Much like a teaspoon stirring a mug of coffee, the shocks lead to turbulence in the galactic gas. These trigger an avalanche-like collapse, which eventually leads to the formation of very dense, cold gas clouds, which are vital for the formation of new stars," Stroe said.

Star formation at this rate leads to a lot of massive, short-lived stars coming into being, which explode as supernovae a few million years later, according to Sobral. "The explosions drive huge amounts of gas out of the galaxies and with most of the rest consumed in star formation, the galaxies soon run out of fuel," he said. "If you wait long enough, the cluster mergers make the galaxies even more red and dead — they slip back into a coma and have little prospect of a second resurrection."

Every cluster of galaxies in the nearby universe has experienced a series of mergers during its lifetime, so they should all have passed through a period of extremely vigorous production of stars. Given that the shocks will only lead to a brief (in astronomical terms) increase in star formation, astronomers have to be very lucky to catch the cluster at a time in its evolution when the galaxies are still being 'lit up’ by the shock.

The next step is to see if the Sausage cluster is unique and that these bursts of star formation need very particular conditions. By studying a much bigger sample of galaxies, the team hope to find out exactly how they happen.