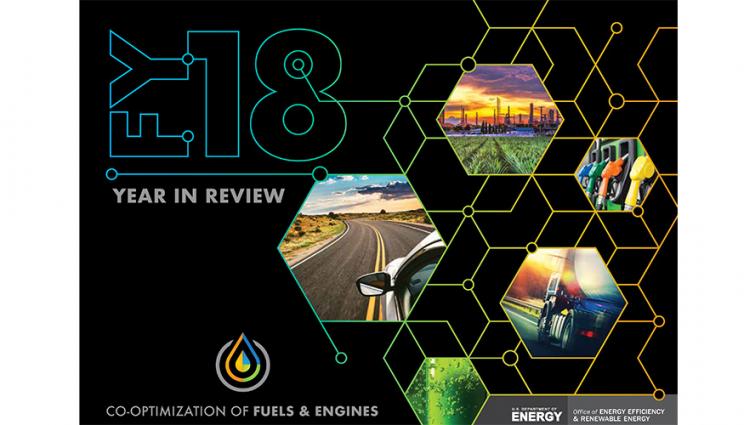 Three years after embarking upon a rigorous evaluation of a pool of more than 400 candidates, researchers with the Co-Optimization of Fuels & Engines (Co-Optima) initiative have identified six blendstocks from two chemical families that exhibit the greatest potential to dramatically increase efficiency when combined with petroleum-based fuels in boosted (or turbocharged) spark-ignition engines for light-duty vehicles.

A report released by the Department of Energy (DOE) describes this and other recent Co-Optima breakthroughs that hold promise to optimize the fuel economy and performance of light-duty passenger cars, as well as that of medium- and heavy-duty freight trucks. Lawrence Livermore National Laboratory (LLNL) is playing a key role in this landmark research, collaborating with eight other national labs and 13 universities.

While fuel economy ratings of today’s cars significantly outstrip those of just a decade ago, cost-effective efficiency improvements remain limited by existing engine designs and fuel formulas. The FY18 Year in Review outlines how Co-Optima’s examination of fuels as dynamic design variables that can work with modern engines is providing industry with the scientific underpinnings needed to accelerate introduction of high-performance fuels and engines that reduce energy consumption, improve air quality and lower drivers’ costs. At this June’s Vehicle Technologies Office Annual Merit Review Meeting, DOE honored the Co-Optima research team for its outstanding achievements.

Potential benefits of Co-Optima research include significant improvements in vehicle fuel economy and increases in the use of domestically sourced fuel for transportation. This has the potential to create new U.S. jobs and keep energy dollars in the United States, while reducing emissions and costs for consumers and commercial operators at the pump.

The cost-competitiveness of new bio-blendstocks depends strongly on their ability to impart beneﬁcial properties to fuels as well as ﬂexibility and utility to fuel providers. Using tools and methods that align with petroleum reﬁners’ economic evaluations, Co-Optima analysts assessed the economic value of seven bio-blendstocks for boosted SI engines to petroleum reﬁners based on the most desirable blendstock properties.

LLNL’s Matt McNenly modeled how a surrogate fuel mixture (BOB) could be blended with a bio-derived blendstock. The work could open the door for model-based fuel optimization, which could help fuel providers save money and energy.

Using the LLNL-developed Co-Optima kinetic model, postdoc Kuiwen Zhang was able to reliably predict ﬂame speeds under engine pressures and temperatures. It shows that cyclopentanone’s (a high-performance blendstock with good blending characteristics) high ﬂame speed is due to high yields of ethylene that subsequently produce reactive vinyl radicals. Kinetic models for cyclopentanone and other high-performance fuels are critical to enabling multidimensional engine simulations that help optimize efficiency and performance when these fuels are used in engines with advanced combustion modes.

Much of the Co-Optima research is focused on components known as blendstocks, which can be produced from a wide spectrum of domestic resources including renewable, non-food, domestic biomass such as forestry and agricultural waste, as well as petroleum or natural gas. They have the potential to deliver deep cuts in polluting emissions from transportation, create much-needed new jobs in rural areas, leverage a billion-ton annual bio-feedstock resource and keep energy dollars in the United States.

Read the full report,  get an overview of the Co-Optima initiative and find more information on Co-Optima activities.