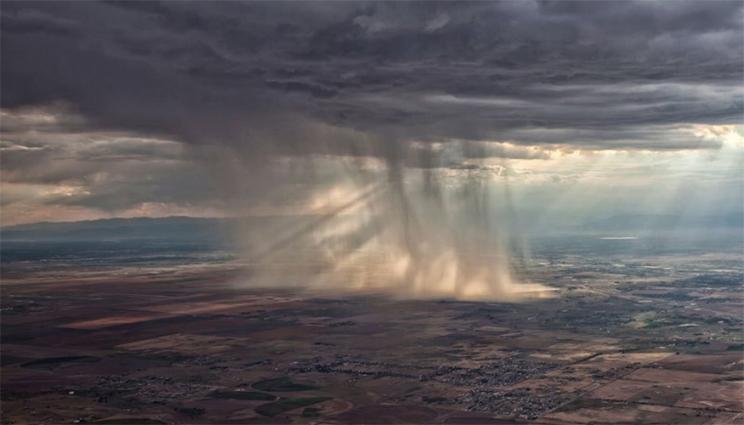 Global precipitation increase per degree of global warming at the end of the 21st century may be about 40 percent smaller than what the models currently predict. Photo courtesy of Haley Luna.

Lawrence Livermore researchers and collaborators have found that most climate models overestimate the increase in global precipitation due to climate change.

Specifically, the team looked at 25 models and found they underestimate the increase in absorption of sunlight by water vapor as the atmosphere becomes moister, and therefore overestimate increases in global precipitation.

The team found global precipitation increase per degree of global warming at the end of the 21st century may be about 40 percent smaller than what the models, on average, currently predict.

The research appears in the Dec. 10 edition of the journal Nature.

Evaluation of model-predicted global precipitation change with actual precipitation observations is difficult due to uncertainties arising from many sources, including insufficient spatial and historical data coverage. As an alternative approach, the team, made up of LLNL scientist Mark Zelinka and colleagues from the University of California, Los Angeles, including lead author Anthony DeAngelis, evaluated model-simulated global precipitation change through consideration of the physical processes that govern it.

The team found that the increase in global precipitation simulated by models is strongly controlled by how much additional sunlight is absorbed by water vapor as the planet warms: Models in which more sunlight is absorbed by water vapor tend to have smaller increases in precipitation. They demonstrated that model-to-model differences in increased absorption of sunlight were not controlled by how much their humidity increased, but by how much additional sunlight was trapped in the atmosphere for a given increase in humidity. Conveniently, this quantity can be measured from space, allowing the team to assess how well the models capture the physics controlling changes in global precipitation.

The intensification of the hydrologic cycle is an important dimension of climate change that can have significant impacts on human and natural systems, perhaps more so than rising temperatures alone, according to Zelinka.

"We sought to understand the sources of this uncertainty and use the best available observations to narrow in on the most likely response," Zelinka said.  "We cannot expect to make useful predictions of local water cycle changes that are most relevant for societal impacts if we do not understand and accurately simulate the change in globally averaged precipitation."

The absorption of sunlight by water vapor is vital to understand future global precipitation changes.

The study notes that more reliable predictions of future precipitation change can be made by improving the representation of how radiation is transmitted through the atmosphere in global climate models. The models that have more sophisticated representations better agree with observations.