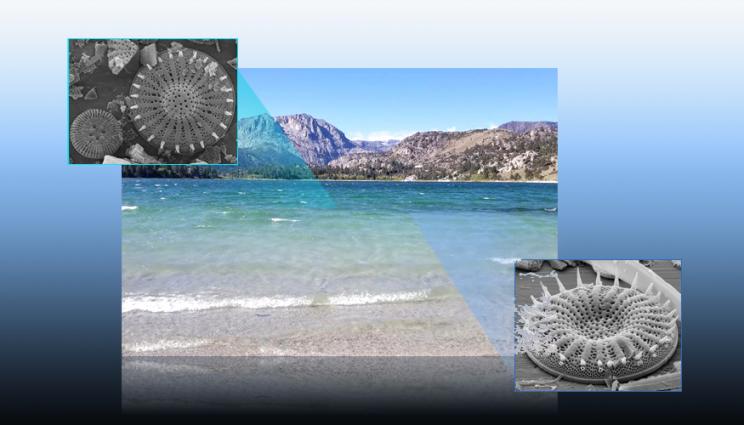 June Lake beach in the Sierra Nevada of California. Climate change is disrupting the water cycle in the Sierra Nevada in ways that are challenging to predict, which lowers society's resilience by limiting water resources. Photo by Mike McGlue/University of Kentucky. Insets: Diatom fossils from June Lake sediments under scanning electron microscope. By studying the changes in fossil diatoms and dating the sediments, the team was able to learn about the aquatic ecosystem’s response to climate change. Photo by Jeffrey Stone/Indiana State.

Climate change has significantly impacted the natural systems of the Sierra Nevada, including the mountain lakes that are an iconic part of California’s natural beauty.

New research from a Lawrence Livermore National Laboratory (LLNL) scientist and colleagues from the University of Kentucky (UK) and Indiana State University (ISU) shows that lake-sediment cores from a subalpine lake in the eastern Sierra Nevada record significant, sometimes abrupt, changes to lake conditions and ecology over the last three millennia.

The Sierra Nevada snowpack serves as the most important water source in the state. Under historical conditions, snow falls on the mountains in the winter and remains frozen until spring. During late spring and summer, meltwater from the snowpack flows into the mountain lakes and streams, ultimately feeding into the major rivers that flow into central and southern California, sustaining vast agricultural fields and urban areas.

However, the new study reveals just how dramatically climate change has already impacted aquatic ecosystems in the Sierra Nevada, and shows the need for action to protect them. The research appears in the journal Global Change Biology.

"Climate change is one of the grand challenges facing society,” said Michael McGlue, associate professor in the UK's Department of Earth and Environmental Sciences in the College of Arts and Sciences. “California, our most populous state and one of the largest economies globally, faces major threats from hot, dry conditions.”

The team, which includes LLNL scientist Susan Zimmerman of the Center for Accelerator Mass Spectrometry (CAMS), conducted their study at June Lake, a small subalpine lake in Mono County on the eastern side of the Sierras, popular for fishing and recreation. The team obtained sediment cores from the bottom of the lake and were able to “read” the history of the lake basin recorded in the sediment layers. They used LLNL’s signature radiocarbon-dating capability at CAMS, along with the 210Pb method for recent sediments, to determine the age of the various layers.

Historical weather records don't extend far enough back in time to fully understand California's natural climate system, but the lake-sediment records allowed the team to reconstruct the region's climate history over the past 3,000 years. To do this, they studied diatoms, a type of algae that leave behind tiny silica fossils that are preserved in lake sediments. By studying the changes in which types of diatoms dominated the ecosystem in the past, the team was able to learn about the aquatic ecosystem’s response to climate change in the Sierra Nevada and when those changes occurred.

The diatoms revealed a detailed history of the lake and its response to changing seasonality, including in the Late Holocene Dry Period and the Medieval Climate Anomaly, which are well-known periods of ancient drought in the region.

But the most striking feature of the fossil record was the uniqueness of the ~1840–2016 period. The team detected the most dramatic changes to the June Lake ecosystem at that time, with the fossils suggesting low water levels, low nutrient concentrations and strong water column stratification. The data suggest that “hot droughts” of the Industrial Era altered the lake state to conditions unseen in the last three millennia, and showed that changes attributable to anthropogenic climate change began as early as the mid 19th century.

“These results really show the importance of putting climate observations made over the historical period into a longer context.” Zimmerman said. “Although California’s climate naturally fluctuates between droughts and floods, the conditions we’re experiencing now are much more dramatic than even the most severe droughts of the last few thousand years.”

"June Lake is a clear example of how sensitive lakes in the Sierras can be to changing climate,” said Jeffery Stone, co-author and professor at Indiana State University (ISU). “Sediment archives like these are one of the few tools we have for recording long-term natural variability and without them we would not be able to clearly observe the profound nature of changes in the lake ecosystem in response to a warming climate.”

Funding for this project was provided by LLNL’s Laboratory Directed Research and Development program, the UK Pioneer Endowment and the Overcash Fund for Field Research.