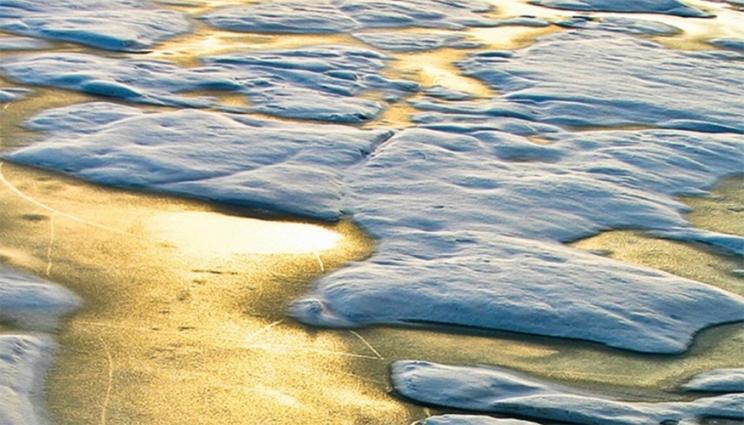 Melting sea ice is just one of the effects of global climate change.

During the same decade that saw the Beatles breakup, the Watergate scandal, the first Earth Day and the opening of the movie Star Wars, efforts to identify human-caused climate change were in their infancy.

Three key events in the 1970s heralded the end of that infancy. The year 2019 marks the 40th anniversary of those three events.

Lawrence Livermore National Laboratory (LLNL) scientists and colleagues from the University of Washington, the Canadian Centre for Climate Modelling and Analysis, the University of Edinburgh, Remote Sensing Systems and the National Oceanic and Atmospheric Administration (NOAA) outline these three key climate events in a paper appearing in the Feb. 25 edition of the journal Nature Climate Change.

The events were the release of an influential National Academy of Sciences report, the publication of a key paper on anthropogenic signal detection and the start of satellite temperature measurements. All three events occurred in 1979. "We showed how scientific advances that grew out of these three events paved the way for scientists to identify human influences on atmospheric temperature," said Céline Bonfils, an LLNL climate scientist and a co-author of the paper.

In 1979, the U.S. National Academy of Sciences published the findings of the Ad Hoc Study Group on Carbon Dioxide and Climate. This is frequently referred to as the Charney report, named after the lead author of the report, Jule Charney of the Massachusetts Institute of Technology.

"The report’s principal findings have aged really well," said LLNL climate scientist Mark Zelinka, also a co-author of the paper. In one key finding of the report, Charney and his co-authors estimated the most probable global warming for a doubling of CO2 to be near 3 degrees Celsius, with a likely error of 1.5 degrees C. "This estimate agrees with our current understanding, but is now bolstered by a mountain of evidence that did not exist in 1979," Zelinka noted.

Specifically, the authors of the Charney report did not have many of the scientific advantages available today: international climate science assessments based on thousands of relevant peer-reviewed scientific papers; four decades of satellite measurements of global climate change; land and ocean surface temperature datasets spanning more than 120 years; estimates of natural climate variability; and sophisticated 3D numerical models of Earth’s climate system.

In summarizing the scientific impact of the Charney report, the Nature Climate Change paper notes that: "Forty years ago, its authors issued a clear warning of the potentially significant socioeconomic consequences of human-caused warming. Their warning was accurate and remains more relevant than ever."

The second scientific anniversary marks the publication of a paper by Klaus Hasselmann entitled "On the signal-to-noise problem in atmospheric response studies." This was one of the first serious efforts to provide a sound statistical framework for identifying a human-caused warming signal.

A key insight in Hasselmann’s 1979 paper was that analysts should look at the statistical significance of global geographical patterns of climate change (rather than focusing on purely local changes). He understood that each influence on the climate system – such as human-caused changes in greenhouse gases, or purely natural changes in the sun’s energy output – left a unique "fingerprint." The uniqueness was more obvious if one studied the patterns and timing of climate change.

"This understanding informed modern fingerprint detection and attribution methods, including the one developed here at LLNL", Bonfils said.

Hasselmann’s paper was a statistical roadmap for hundreds of subsequent climate change detection and attribution studies. In the last 40 years, these investigations identified human fingerprints in a wide range of independently monitored observational datasets.

In November 1978, Microwave Sounding Units (MSUs) on NOAA satellites began monitoring the temperature of broad atmospheric layers. Microwave sounders provided estimates of global changes in the temperature of the troposphere (the lowermost layer of Earth’s atmosphere) and the layer above the troposphere (the stratosphere). Signal detection studies with these measurements revealed that human fingerprints were identifiable in the warming of the troposphere and cooling of the lower stratosphere, confirming early computer model projections.

At the end of their celebration of these three anniversaries, the researchers asked a simple question: "When did we know?" Using the satellite data and Hasselmann’s signal detection method, the scientists determined when a human fingerprint of tropospheric warming was identifiable with high statistical confidence. In two out of three datasets, fingerprint detection at a 5-sigma threshold – the gold standard for discoveries in particle physics – occurs no later than 2005, only 27 years after the 1979 start of the satellite measurements.

"We can’t afford to ignore such clear signals," said Stephen Po-Chedley, an LLNL co-author who has developed temperature records from MSU data.

Other Livermore researchers include Benjamin Santer and Jeffrey Painter who collaborated with Qiang Fu at the University of Washington, John Fyfe at the Canadian Centre for Climate Modelling and Analysis, Gabi Hegerl at the University of Edinburgh, Carl Mears and Frank Wentz at Remote Sensing Systems and Cheng-Zhi Zou at the National Oceanic and Atmospheric Administration.

Work at LLNL was funded by LLNL’s Laboratory Directed Research and Development Program, the Early Career Research Program Award and the DOE.