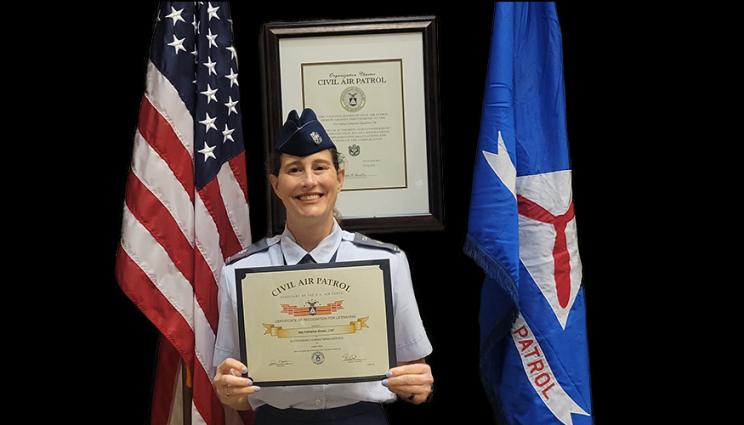 Earlier this month, Lab employee Kathy Brown — who volunteers with the Civil Air Patrol — received a certificate of recognition and a lifesaving ribbon with a silver star during a Jan. 12 ceremony held by the Civil Air Patrol’s Tri-Valley Composite Squadron 156 in Livermore.

When Kathy Brown joined the Civil Air Patrol more than a decade ago, she never thought she would help save someone’s life.

But that’s something she and other members of her team did last spring.

For her efforts, the Lawrence Livermore National Laboratory employee received a certificate of recognition and a lifesaving ribbon with a silver star during a Jan. 12 ceremony held by the Civil Air Patrol’s Tri-Valley Composite Squadron 156 at the Livermore Airport.

“It’s an honor to receive this rare award,” said Brown, a LLNL industrial safety professional. “I was glad I was there to help coordinate the rescue, but I’m especially pleased the Civil Air Patrol airplane crews are being recognized for their valiant efforts and assistance to this injured person.”

On May 22 of last year, Brown was part of a homeland security mission in Southern California when officials from a government agency asked the Civil Air Patrol base to assist in locating an injured person.

The injured individual, a woman, was stranded in the desert. She was unable to move and had sustained injuries to her leg, had no provisions for desert survival and did not know her location. Once the woman called 911, law enforcement authorities were able to determine an approximate location using her cell phone signal.

At the time of the call, three Civil Air Patrol aircraft were in the air and in the process of returning to base. One airplane diverted to the approximate area to initiate a search for the injured person, while the other two airplanes landed to refuel and join the search.

The first plane located the injured woman and was then relieved by one of the refueled aircraft. The relief aircraft continued to circle above the stranded person to mark her location for the ground teams as the daylight faded amidst the rugged terrain.

“The injured party saw our airplane and told the 911 operator,” Brown said. “As we continued to circle the area, law enforcement authorities saw our plane and were then able to locate the injured party.” The individual was transported to the hospital.

Brown, who is a major in the Civil Air Patrol and has been with the organization for 12 years, was training on May 22 to be a mission manager. Her mentor was on the phone with officials from a government agency, who were on the phone with the 911 operator. Brown was in contact with the airplane crews and coordinated the rescue.

“Kathy was a member of the mission base staff for the events of that day and was one of the key personnel responsible for the coordination of the air sorties that were used in the search,” said Joe Spears, the leader of the Tri-Valley Composite Squadron 156 and a computer scientist at the Lab’s National Ignition Facility.

“Without her contributions and those of her team, the aircraft would not have been able to remain in the area for the rescue teams to find the subject,” Spears added.

For her part, Brown calls the team’s Civil Air Patrol pilots the “real heroes” of the rescue.

“They had already been in the air for six or more hours that day and two of our three planes had already returned to base and the other plane was on the way back,” Brown said. “We asked the third crew if they would remain in the air and they were willing. These teams did an amazing job.”