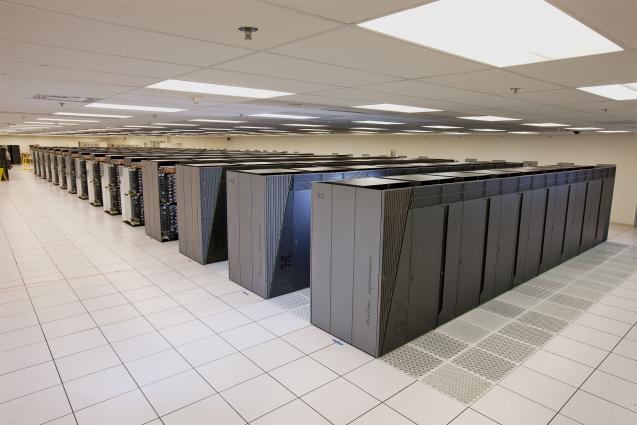 Sequoia, an IBM BlueGene/Q system installed at Lawrence Livermore, is now the No. 3 system. Sequoia was first delivered in 2011 and has achieved 17.17 petaflops on the Linpack benchmark using 1,572,864 cores. Sequoia is also one of the most energy efficient systems on the list, consuming a total of 7.84 MW and delivering 2,031.6 Mflops/W.

China's Tianhe-2 is the new world champ of supercomputing

Tianhe-2, or Milky Way-2, a supercomputer developed by China's National University of Defense Technology, is the new No. 1 ranked machine on the industry-standard Top500 list of the world's most powerful high performance computing (HPC) systems.

Clocked at 33.33 petaflops (quadrillion floating operations per second) on the Linpack benchmark, the Tianhe-2 dropped Oak Ridge National Laboratory's Titan to No. 2 on the list. The new Top500 list was announced Monday at the International Supercomputing Conference (ISC) in Leipzig, Germany.

LLNL's Sequoia, an IBM Blue Gene/Q system, dropped to No. 3 and Vulcan made its first appearance on the Top500 list at No. 8. DOE and NNSA have four supercomputers in the first 10 of the Top500.

"We congratulate China's National University of Defense Technology for their remarkable achievement," said Dona Crawford, associate director for Computation. "The latest edition of the Top500 list underscores the global nature of high performance computing. Recognition of the value of HPC to the scientific discovery and technological innovation that boost economic competitiveness has resulted in fierce global competition to develop next-generation systems."

Crawford recently testified at a Congressional hearing about the critical need to develop next-generation supercomputers. She joined Daniel Reed, University of Iowa's vice president for research and economic development; Roscoe Giles, chairman, Advanced Scientific Computing Advisory Committee; and Rick Stevens, associate laboratory director for computing, environment and life sciences at Argonne National Laboratory. The group addressed the House Subcommittee on Energy, which is part of the House Committee on Science, Space and Technology.

The testimony about next-generation supercomputers is available online.

This is the second Chinese system to be ranked as the world's most powerful supercomputer. China broke into the top echelon of HPC in November 2010, when the Tianhe-1 took the top ranking. The Tianhe-2 surprised HPC pundits by appearing two years ahead of its expected deployment, according to the Top500. Tianhe-2 has 16,000 nodes, each with two Intel Xeon IvyBridge processors and three Xeon Phi processors for a combined total of 3,120,000 computing cores.