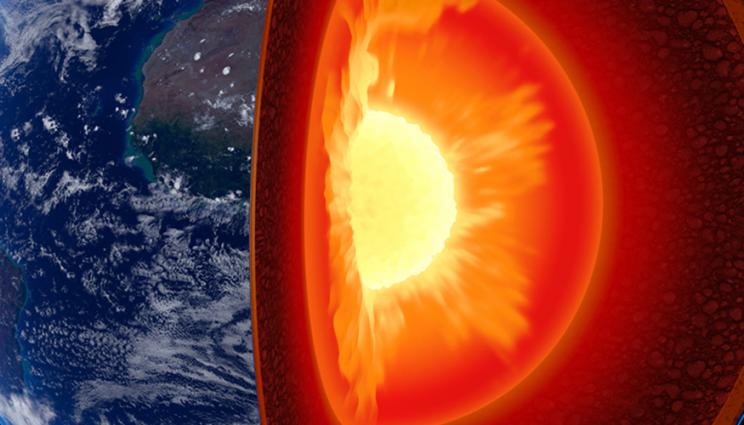 An international collaboration of researchers has probed the high-pressure behavior of iron, which is found in the core of rocky planets like Earth. Image courtesy of Shutterstock/Johan Swanepoel.

Checking out iron under pressure

Iron is the most stable and heaviest chemical element produced by nucleosynthesis in stars, making it the most abundant heavy element in the universe and in the interiors of Earth and other rocky planets.

To get a better understanding of the high-pressure behavior of iron, a Lawrence Livermore National Laboratory (LLNL) physicist and international collaborators discovered the subnanosecond phase transitions in laser-shocked iron. The research appears in the June 5 edition of the journal Science Advances.

The research could help scientists better understand the physics, chemistry and the magnetic properties of Earth and other planets by measuring time-resolved high-resolution X-ray diffractions for the entire duration of shock compression. This allows observation of the timing of the onset of elastic compression at 250 picoseconds and the inferred observation of three-wave structures between 300-600 picoseconds. The X-ray diffraction reveals that the famous phase transformation from ambient iron (Fe) to high pressure Fe occurs within 50 picoseconds.

At ambient conditions, metallic iron is stable as a body-centered cubic form, but as pressures rise above 13 gigapascals (130,000 times the atmospheric pressure on Earth), iron transforms to a nonmagnetic hexagonal close-packed structure. This transformation is diffusionless, and scientists can see the coexistence of both the ambient and high-pressure phases.

There are still debates about the locations of the phase boundaries of iron as well as the kinetics of this phase transition.

The team used a combination of an optical laser pump and X-ray Free Electron Laser (XFEL) probe to observe the atomic structural evolution of shock-compressed iron at an unprecedented time resolution, about 50 picoseconds under high pressure. The technique showed all of iron’s known structure types.

Team members even discovered the appearance of new phases after 650 picoseconds with densities similar or even lower than that of the ambient phase.

“This is the first direct and complete observation of shock wave propagation associated with the crystal structural changes recorded by high-quality time series data,” said LLNL physicist Hyunchae Cynn, a co-author of the paper.

The team observed three-wave temporal evolution by the elastic, plastic and the deformational phase transition to the high pressure phase, followed by post compression phases due to rarefaction waves in 50-picosecond intervals between 0 and 2.5 nanoseconds after irradiation with the optical laser.

Further experiments may lead to a better understanding of how rocky planets were formed or whether they have a magma ocean in the interior.