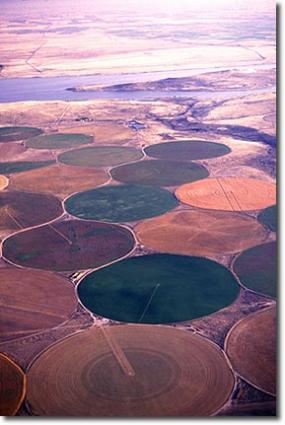 More than 100 center-pivot sprinklers controlled by a central computer irrigate wheat, alfalfa, potatoes, and melons along the Columbia River near Hermiston, Oregon.

LIVERMORE, Calif. — Farmers who plant more crops, increase irrigation coverage and till the land less can have a profound effect on climate.

“Nearly all models used to predict climate changes either ignore agriculture altogether or assume that farmers behave the same way through time,” said David Lobell, the lead author on a paper appearing in the March 23 issue of the journal Geophysical Research Letters . “In reality, farmers are changing rapidly in response to new technologies, growth in demand and other factors. This study suggests that these changes may have important cooling effects, especially at local scales.”

Human activities are widely recognized as contributing to climate change through the burning of fossil fuel and land use activities.

Previous studies had considered the effects of converting natural ecosystems such as forests into croplands. Croplands generally reflect more sunlight than other land covers, and therefore tend to cool local temperatures.

“In our earlier study, we found that historical conversion of forests to croplands had cooled the planet by 0.5 degrees Fahrenheit, and locally by as much as 4 degrees Fahrenheit,” said Livermore’s Govindasamy Bala, co-author of the study.

But past work had neglected changes occurring within existing croplands.

According to the Food and Agricultural Organization, the net increase in global cropland during the last 50 years has been about 10 percent. But in existing cropland, over the same period, farmers have doubled irrigation areas, have more than doubled the crop yields, and have increased the number of crops grown in a field per year. As crops become more productive, more sunlight is reflected. A recent trend toward less frequent plowing of fields also has raised the reflectivity, or albedo, of the surface. Each of these factors can cool local temperatures in the climate model by more than 2 degrees Fahrenheit.

The authors of the study, which included Livermore scientist Philip Duffy, caution that the changes in the model were extreme, and effects in the real world are likely smaller. But they identified two main implications of their work.

First, the past effects of global warming in agricultural regions may have been partially masked by changes in farmers’ practices.

“In the context of the ongoing climate change debate, this study clearly shows that a complete documentation of localized natural and human induced changes to the environment will be necessary to understand climate change at the local and regional levels,” said Bala.

“Agricultural regions are some of the key areas where we would like to understand and predict climate changes in order to aid adaptation to global warming,” added Lobell.

Second, the study indicates that climate mitigation policies, which often include incentives to farmers, may be too simplistic. Most proposed climate policies focus only on the ability of farmers to sequester carbon in soils or reduce on-farm energy use.

“This study illustrates that carbon is not the only important way that agriculture affects climate, and so focusing only on carbon may lead to an under- or over-evaluation of agriculture’s role,” Lobell said.

For example, the study estimated that the increased albedo from reduced tillage had roughly as much of a cooling effect on global climate as the increased soil carbon sequestration.