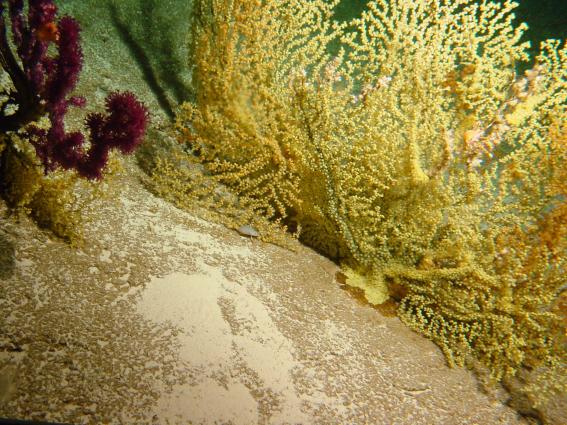 Living and fossilized coral are gathered from dives in the Hawaiian Islands. A Lawrence Livermore scientist and collaborators have studied coral to determine that a long-term shift in nitrogen content in the Pacific Ocean has occurred as a result of climate change. Image courtesy of NOAA Hawaii Undersea Research Laboratory.

Anne M Stark, stark8 [at] llnl.gov, (925) 422-9799
Using deep sea corals gathered near the Hawaiian Islands, a Lawrence Livermore scientist, in collaboration with UC Santa Cruz colleagues, has determined that a long-term shift in nitrogen content in the Pacific Ocean has occurred as a result of climate change.

Overall nitrogen fixation in the North Pacific Ocean has increased by about 20 percent since the mid 1800s -- a shift similar to major paleoceanographic transitions in the sedimentary record -- and this long-term change appears to be continuing today, according to a study published Dec. 15 edition of the journal,Nature.

The study combines a unique compound-specific isotope technique (largely being pioneered at UC Santa Cruz), measured in deep-sea corals, to reconstruct changes in biogeochemical cycles from the North Pacific subtropical ringlike system of ocean currents, the largest contiguous biome in the world.

Using chemical information locked in organic skeletal layers, the team used these ancient corals as detailed recorders of changes at the base of the open Pacific food web over the last 1,000 years. This represents the first detailed biogeochemical records for the planet's largest contiguous ecosystem

"The timing of the change -- at the start of the anthropogenic era (post-industrial, and coming out of the Little Ice Age) -- begs the question as to whether there is more than just a correlation between our record and, for example, Northern Hemisphere temperatures and increased dust deposition due to land use change," said Tom Guilderson, a Livermore scientist working at the Laboratory's Center for Accelerator Mass Spectrometry.

The study, authored by UCSC's Owen Sherwood (now at the University of Colorado in Boulder) and Matt McCarthy and LLNL's Guilderson, is a collaborative project to develop novel isotopic measurements, and use them in long-lived deep sea corals.

Colonial corals can live for millennia, making them likely the world's longest living animals. They deposit layers of protein-rich skeletal materials on that record the chemical signatures of the constant rain of detrital plankton material from the ocean's surface (the corals' food), making these animals akin to "living sediment traps," according to Sherwood.

However, unlike sediment traps, the corals provide highly detailed records not for decades but for up to thousands of years. This aspect is critical in places like the open Pacific, where sediment accumulation is so slow that it is essentially impossible to get meaningful data for recent centuries.

"We reconstructed highly detailed records of how ocean biogeochemical systems have changed through the Holocene period and, in particular, to understand what the 'baselines' really were before instrumental record and dramatic anthropogenic changes began," Guilderson said. The results may change how we understand open ocean ecosystem stability, Sherwood said. The Pacific contains the largest contiguous ecosystem on the planet. Time series data near Hawaii have shown dynamic decadal scale variability. But the new records from deep corals now show that the decadal-scale time series changes are really only small oscillations superimposed on a dramatic long-term shift at the base of the Pacific ecosystem.

"This also has very significant implications about how we understand, and perhaps, can better predict effects of global warming in the Pacific, but also likely in other subtropical regions," Guilderson said.