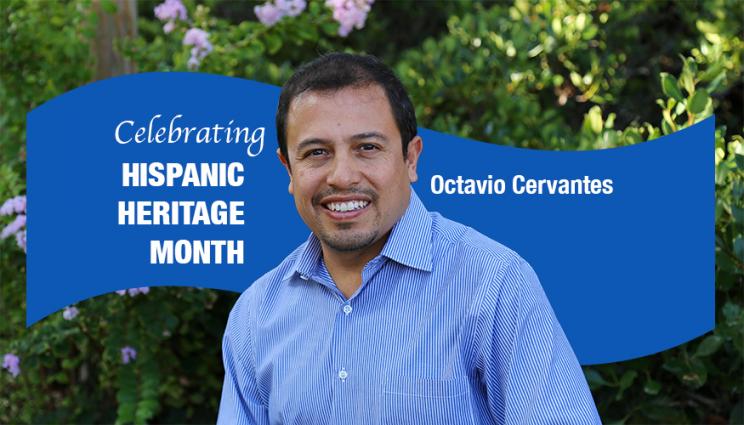 When Octavio Cervantes and his family first settled in Los Angeles after emigrating from Mexico, he was excited to have a fresh start. "I was 12 years old and I vividly remember my father telling my family that we needed to work hard, as our new life started in this country."

While he didn’t have a clear picture of what he wanted to do in life, he knew that education was very important. He spent hours each day on the bus commuting to Pacific Palisades to go to a good public school.

Cervantes’ story is one of perseverance and dedication. Now a successful materials scientist, principal investigator and newly appointed deputy group leader in the Materials Science Division of the Physical and Life Sciences Directorate at Lawrence Livermore National Laboratory, Cervantes came from humble origins and has worked hard to get to where he is today.

In high school, Cervantes had no real plan for his future and thought he would probably just do what his family and others expected of him -- landscaping or auto mechanics -- until one day a high school teacher opened his mind to new possibilities.

"One morning during my senior year in high school, my math teacher (who also was my soccer coach) pulled me out of the classroom and asked me, ‘What are you going to do after high school?’ At that particular moment, my plan was to work with my uncle in his landscaping business and maybe take a class or two at a community college. A few weeks later, the same teacher pulled me out of the classroom again and asked me the same question," he said. "When I told him that I didn’t know, he then asked me, ‘What do you really like to do?’ I told him that I liked working on cars because by that time I had taken three years of automotive mechanics in high school and had rebuilt a few engines and transmissions. His follow-up comment is what changed my life. My teacher said, ‘You don’t want to work on cars all your life, you should design them. You should study mechanical engineering.’ It was then that the light bulb turned on. After that moment, I started to think about a career in engineering." 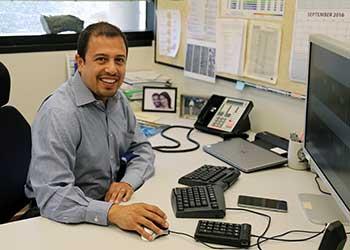 Cervantes worked his way through college attending California State University, Northridge where he earned a bachelor’s degree in mechanical engineering. As the first generation in his family to graduate with a college degree, he persevered and went on to earn a master’s degree in materials science and engineering from the University of Illinois at Urbana-Champaign.

After receiving his master’s, Cervantes accepted a position at Lawrence Livermore in April 2002. "I had several job offers from Fortune 500 companies, but decided on the Lab because of the ability to work on various projects," Cervantes said. "Moreover, I always wanted to pursue a doctorate degree and the Lab offered such a possibility through tuition assistance. Two years into my tenure at LLNL, I began a doctorate program in materials science and engineering with the University of California, Davis."

Cervantes now leads a group of colleagues and technicians with various technical backgrounds. His work at the Laboratory involves serving as the principal investigator for two large projects. He is leading a multi-million dollar project with the Air Force to establish LLNL as the premier surveillance laboratory for conventional munitions and the Joint Munition Program (JMP) to develop novel characterization techniques to evaluate the performance of energetic materials. He also is the lead materials scientist on a multi-million dollar project sponsored by the Defense Threat Reduction Agency (DTRA). In this project, Cervantes and his colleagues successfully developed a plasticized thermite.

"What I love most about my job at the Lab is the complexity and challenges each and every project brings," Cervantes said. "As a materials scientist and as an experimentalist, I design a material and/or experiment to obtain the highest fidelity data possible, but at times, I have to go through several iterations to get there, which often brings new and different challenges, making the work interesting." 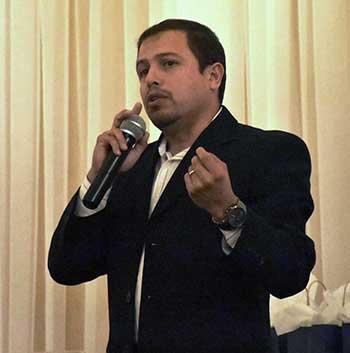 Thankful for the influences in his life, Cervantes enjoys mentoring, motivating and inspiring others. Earlier this year, he was the invited keynote speaker for the Society of Hispanic Professional Engineers (SHPE) annual awards and installation banquet for the Greater San Fernando Valley professional chapter in Los Angeles. SHPE is a non-profit organization whose mission is to serve as role models for the community and also serves as an avenue for professional development and networking. The purpose of the banquet was to celebrate the efforts of several underrepresented graduating engineering students. Cervantes’ speech focused on opportunities for potential employment for the students at Fortune 500 companies, national labs, academia, small companies, start-ups, etc. He discussed what it takes to succeed in each and encouraged them to pursue a graduate degree.

In mid-October, Cervantes will participate in the Bay Area Graduate Pathways to STEM Conference at UC Berkeley. The main focus of this conference is to encourage students to purse a graduate degree.

Cervantes is proud of his Hispanic heritage and especially loves the many celebrations. "My paternal grandfather and maternal grandmother were extremely happy people who enjoyed having family and friends around," Cervantes said. "My grandfather was known as ‘El Muchacho Alegre’ (the cheerful guy) and celebrated pretty much anything and everything for no real reason. This played an important part in my life as I love having people around. Life is too short, and at the same too long, not to enjoy it." Another aspect of his Hispanic heritage that Cervantes appreciates is the fact that many people in his culture "work really, really hard and truly enjoy the little they have."

Outside of work, Cervantes is heavily involved in his kid’s activities: soccer games, flag football, Cub Scout activities and hiking trips. He also enjoys taking Zumba classes and dancing to all types of music.

Cervantes’ credits his family for helping him to achieve success and for providing inspiration along the way. "My parents engraved on my siblings and me, the habit of working hard," Cervantes said. "During my academic years, my parents were the fuel of my dreams because they worked really hard to provide for us and I am extremely thankful. I also am very thankful to my siblings, friends, colleagues and advisers who have helped me throughout my career. Today, my wife and three young kids inspire me tremendously and I constantly remind my children that they also need to work hard to accomplish their dreams."