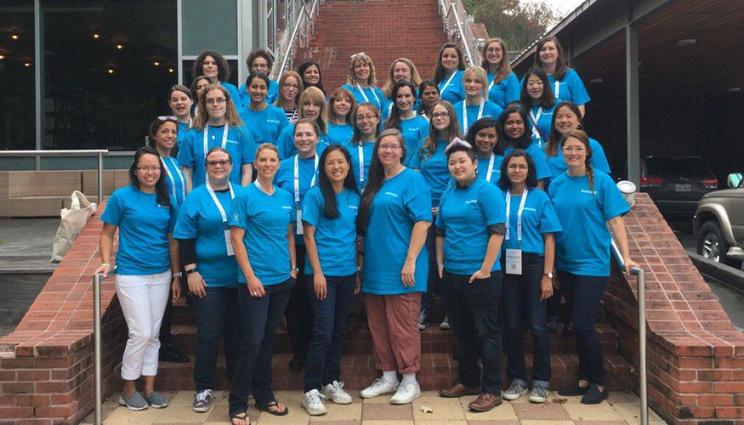 Dozens of LLNL employees attended the 2018 Grace Hopper Celebration of women in computing. Photo by Kristi Belcher/University of Oregon.

Celebrating diversity and inclusion in tech

"It’s an awesome experience to attend a conference where women are in the majority," said Tammy Dahlgren, product owner and developer for a high-performance computing (HPC) workflow toolkit called Siboka. Throughout her schooling and career, she has seen cases where gender imbalance negatively affects team dynamics and productivity. "By supporting GHC and STEM [science, technology, engineering, math] outreach, the Lab is moving in the right direction for increasing the representation of women," she said.

Computation’s Associate Director Bruce Hendrickson agreed. "We need to cast a wider net to meet our workforce needs, developing a culture that attracts diversity," he said. "The Lab attends GHC because we have such a culture and care about improving it." 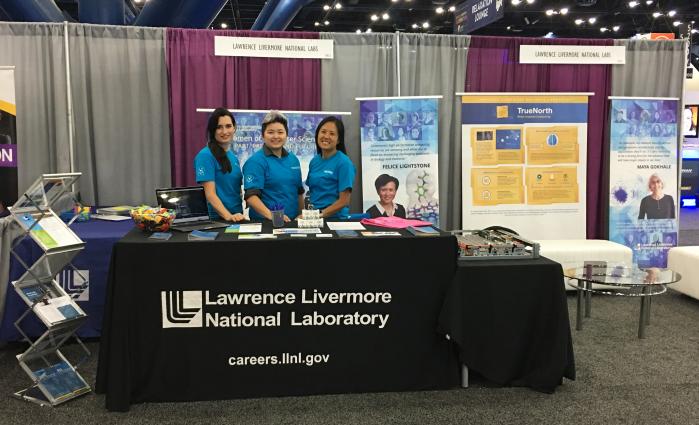 GHC focuses on both technology and career development. The format encourages attendees to network and employers to recruit. Computation’s Amanda Minnich and Waverly Roeger were hired after connecting with LLNL staff at previous GHC conferences. This year, LLNL recruiters identified several candidates for interviews and potential offers. The Lab’s recruiting booth featured talks on HPC opportunities for undergraduates and mid-career women, the role computing plays in national security and the importance of diversity to teamwork at the Lab.

GHC '18 was software engineer Ashka Shah’s first conference. "I heard about the conference as an undergraduate but was never able to go," she said. "I wanted exposure to a larger community of female computer scientists."

Hendrickson, another first-time GHC attendee, stated: "I didn’t realize how big the conference was until I saw the audience at the plenary sessions in the Houston Rockets basketball arena." Last year, GHC attendance topped 18,000 people — 32 percent of whom were students — from more than 80 countries.

GHC’s technical program included tracks such as Artificial Intelligence, Internet of Things/Wearable Technology and Data Science. Shah presented a poster about her work with the National Ignition Facility Computing (NIFC) division. "I wanted to gain experience presenting technical information and to share the project with people who may be interested in working at a national lab," she said. 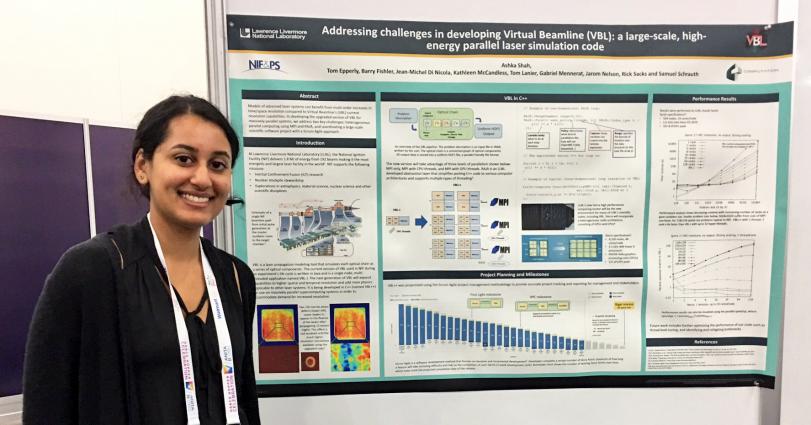 This year marked Dahlgren’s third as co-chair of the GHC Software Engineering track. The Anita Borg Institute, which oversees GHC, provided review criteria for the track. Dahlgren explained: "When making our recommendations to the Institute, co-chairs consider reviewer ratings, recommendations and comments together with the number of sessions the track is allocated."

For software program manager Anh Quach, the conference’s technology showcase was memorable. "One exhibit showed the insides of popular electronics like smart speakers, laptops and headsets. Many booths demonstrated virtual reality software still in alpha testing," she said. "I was the nerd learning about data acquisition from the John Deere booth."

Listening to women of color

Quach has been to GHC five times, taking on new responsibilities each year. She is LLNL’s lead recruiter, co-founder/co-chair of the Vietnamese Women in Computing Systers Affinity Group and member of the Organizational Transformation Committee. "GHC gives me an annual dose of inspiration to be a change agent as well as the opportunity to mentor Vietnamese students in person," Quach said. She was recently recognized with an LLNL Director’s Diversity and Inclusion award for her GHC recruiting efforts.

Quach spoke on a panel with other Asian leaders at GHC’s Asian Women in Computing social. She also spent time with students at a dinner featuring Vietnamese cuisine. "Many Vietnamese students come from strict families who don’t encourage them to pursue tech careers or interests. Moreover, the Western world admires charisma and extroversion, often excluding cultures that value introverts and their thoughtful observations. Diverse walks of life need a seat at the table," she said.

Shah, who came to LLNL as an intern in 2016 before converting to staff, acknowledges that women of color are often successful in Bay Area technology fields. However, in her experience, the most prevalent cultural challenge is being underestimated. "I feel my diverse background gives me insight and brings a fresh perspective to my group."

Software developer and first-time GHC attendee Jackie Dubil called the conference "absolutely amazing and affirming." As a transgender woman and member of LLNL’s Livermore Pride employee resource group, Dubil is keen to help the Lab provide a supportive environment for LGBTQ [lesbian, gay, bisexual, transgender, queer/questioning] employees and recruits. "Many LGBTQ prospects will look at resources like the Human Rights Campaign’s Corporate Equality Index before considering an employer. Publicizing that we welcome LGBTQ people can be a big deal," she said.

With an abundance of options in the conference program and after hours, Dubil attended sessions on workplace diversity and inclusion, an LGBTQ luncheon, an evening Lesbians Who Tech gathering and the GHC wrap party. "The fact that I’m trans was never an issue throughout the whole conference. Everyone I met was accepting of queer women and gender non-conforming people," she said.

Dubil’s GHC experience helped her identify room for improvement at the Lab. "Livermore Pride is working on guidelines for supporting gender transition in the workplace," she said. "The Lab’s heavy involvement in GHC and other programs like Girls Who Code is good progress toward promoting inclusivity. We could work on greater training for eliminating unconscious biases in hiring."

Women make up almost 30 percent of the Lab’s workforce. Hendrickson said: "I went to GHC to gain insight into women’s experiences in computing, which will help me guide Computation staff."

Hendrickson appreciated hearing inspiring stories of technology development and getting to know LLNL employees outside the office. He attended a session about improving hiring processes and another for men about how to be better allies, noticing a theme throughout GHC of elevating all types of disadvantaged and underrepresented groups. "There was a strong sense of compassion from participants and speakers," he said.

Hendrickson sees the technology community — both inside and outside the Lab — responding to demographic imbalances, though progress is still needed at all phases of the workforce pipeline. He noted: "Computing is a rich discipline. We can do a better job of conveying that and focusing on creative and team elements."

Learn more about LLNL’s multidisciplinary GHC delegation and the Office of Strategic Diversity and Inclusion Programs.