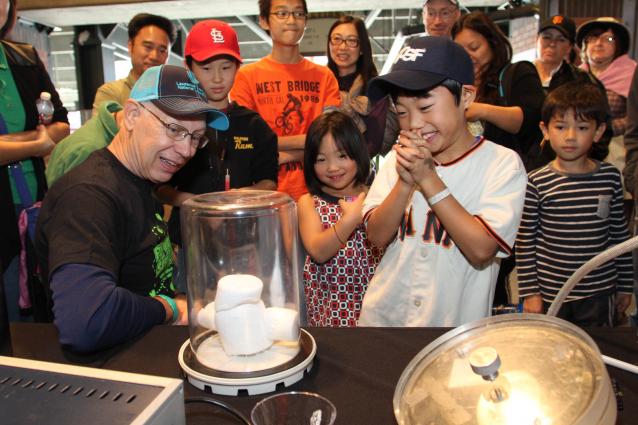 Aspiring scientists and budding engineers – the Bay Area Science Festival is calling you. Now in its sixth year, the festival will hold its annual Discovery Day at AT&T Park in San Francisco on Saturday, Nov. 5.

Each year Discovery Day presents an array of hands-on exhibits, experiments, games and demonstrations from laboratories, universities and businesses, all designed to inspire the next generation of scientific and technological minds. Last year, more than 30,000 people attended.

Lawrence Livermore’s displays will be held at two booths. The first features an interactive, avatar-hosted game to test basic scientific know-how, and two special energy bikes that will challenge participants' mettle and pedal power to power up common household items such as light bulbs, radios and small appliances. Visitors also can tour the National Ignition Facility, the world’s largest and most energetic laser, through 3D virtual reality.

The second booth will feature the Lawrence Livermore’s popular "Fun With Science" interactive presentations, which demonstrate scientific principles and describe how the Lab uses these phenomena in its daily work.

"The Laboratory is proud to be a part of Discovery Day. Through hands-on encounters in science and engineering, we demystify technology for kids and motivate them to pursue STEM careers," said Lab Director Bill Goldstein.