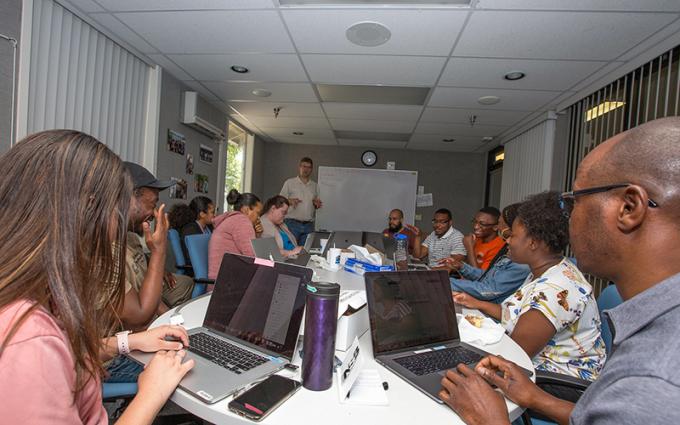 A University of the Virgin Islands graduate with a degree in computer science, Angie Estien first heard of Lawrence Livermore National Laboratory (LLNL) at a conference in Puerto Rico during her sophomore year. Intrigued by the Lab’s national security mission, she wanted to learn more.

Working with her college adviser, Estien applied for a summer internship at LLNL through the Consortium Enabling Cybersecurity Opportunities and Research (CECOR) program, a cybersecurity education, internship and workforce partnership between the Department of Energy’s (DOE) National Nuclear Security Administration (NNSA), LLNL, Sandia National Laboratories and 13 historically black colleges and universities (HBCU). The collaborative effort, funded by NNSA, seeks to develop a K-20 pipeline of cybersecurity professionals to address a pressing workforce shortage, estimated at more than a million job openings.

For three months this summer, Estien and 11 other students selected for LLNL’s CECOR summer internship program are getting a unique, hands-on educational experience in computer science, cybersecurity, machine learning and job preparation. For Estien, who is working on a project related to cybersecurity, the experience already has been a valuable supplement to her college education.

"At my university they’re leading more with software development, coding software for websites and such, as opposed to here, where I’m working on actual [national security] stuff," Estien said. "The significance of what you’re doing makes it that much more worth it. I’ve worked in corporate before and, even if you like your job, it’s stressful. Here the environment is totally different. This is the first place I’ve considered where I’m like, ‘I could leave home for this.’ "

For many of the students, who were nominated by their respective universities for the program, LLNL’s CECOR program is their first internship experience. Now in its fifth and final year of funding, LLNL’s principal investigators for the CECOR partnership were cybersecurity researcher Celeste Matarazzo and Tony Baylis, director for the Lab’s Office of Strategic Diversity and Inclusion Programs, with the goal of helping narrow the gap between cybersecurity needs and the available pool and cultivating talent in underserved, minority student populations. Since its inception, LLNL has hosted 100 CECOR students with 30 of those students returning for at least a second time.

"Many of the students had never heard of the national laboratories before," said Matarazzo, an associate program leader in Global Security. "We’ve had a tremendous growth in the curriculum for the students and in informing the students of their opportunities — that’s through our partnerships with CECOR and by showing them what is possible, providing them exposure to what a career as a computer scientist and cybersecurity researcher is like and giving them a grounding in academics so that they can pursue advanced degrees."

Thousands of students, from kindergarten age to college undergraduates, were impacted by the broader consortium over its first four years, according to organizers, through education and training, K-12 programs, summer internships and bootcamps teaching young people programming essentials like Linux and Python, and Raspberry Pi hardware. From 2014-18, the program resulted in the creation of eight new cybersecurity labs at six HBCU schools, introduced more than 3,000 new students to STEM and influenced 500-plus students to graduate with degrees in cybersecurity-related fields. More than 2,000 students have attended CECOR cybersecurity camps for K-12 and college students, with close to 150 of those hosted at LLNL and Sandia. Many undergrads, who perhaps wouldn’t have otherwise pursued advanced degrees, have gone on to graduate school. Others eventually were hired at LLNL or Sandia as full-time employees or have gone on to other labs and government agencies. 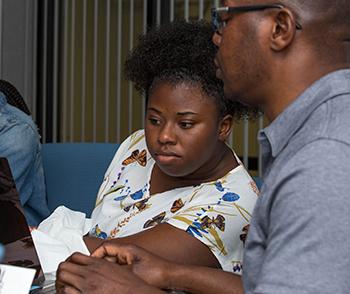 Prior to the consortium, LLNL had done only a small amount of recruiting at the HBCU campuses (many of them located in the South and East Coast), and LLNL had few interactions with faculty. Thanks to CECOR, organizers said, LLNL now has long-established relationships with faculty throughout the consortium universities — dozens of faculty members have been trained in cybersecurity — and the schools have responded by building curriculum tailored to the requirements of today’s cybersecurity jobs, evidenced by nearly 222 new or improved cybersecurity courses instituted at 13 HBCU schools, including more than 60 new courses added in the past year.

"What we were able to do was advise and assist in the development of (most) of the universities that were involved," Baylis said. "One very small university had never graduated students who had pursued advanced degrees as a STEM major before; now they have graduated three; that is significant in the world of small colleges and universities. Other universities weren’t accredited or didn’t have publications, and now they do. Some are getting more students, specifically women into their universities, as well. But the biggest impact we’ve seen is in the students…What we’ve been able to do is provide them with confidence, knowledge and educational enrichment that builds upon them doing more for themselves and for the nation. I think that’s a big plus for us all."

Based on data collected by the consortium, CECOR students perform better than the general student population, with GPAs and graduation rates higher than students who were not in the program. Since CECOR began, one school, Claflin University in South Carolina, has received Accreditation Board for Engineering and Technology (ABET) accreditation in computer science. Estien’s school in the Virgin Islands is going through the accreditation process.

The principal investigators at the universities work collaboratively with Lab team principal investigators on the selection of the students to participate in LLNL’s CECOR summer internship program. The Lab is responsible for onboarding the students and providing them with stimulating projects that give them insight to Laboratory mission work and challenge them to grow and learn. Baylis and Frank Graziani run a similar consortium focused on developing physicists.

This summer, the students are acquiring data science expertise by watching video lectures adapted from a class taught at Stanford University, working on coding and machine learning problems and exercises in Python and engaging in discussions with their nine Lab mentors, and attending seminars to introduce them to cyber activities at the Lab. Many of the projects are turned into deliverables for sponsors.

More recently, according to computer scientist and organizer Marisol Gamboa, CECOR has focused on bringing in students who are closer to graduation and to meeting the cybersecurity needs of the Lab. Organizers have focused on familiarizing students with concepts that might not have been part of their regular college education, such as using Linux and programming in other computing languages that weren’t taught in their schools and other classes that provide them with refreshers in computer science fundamentals and machine learning 101.

"It’s an opportunity for them to try something new, something different," Gamboa said. "Our intent is to try to prepare them for a job as much as possible. They have a long career ahead of them."

CECOR summer internship program participant Cassie Tucker, who recently graduated from Denmark Technical College in South Carolina with an associate’s degree in computer programming and a certificate in cybersecurity, said she decided to travel cross-country to intern at Livermore because she felt she needed to be better prepared for her career beyond what she could get from her two-year program.

"My school told me that I would be learning a lot, that I would be contributing something, and I would get real-world work experience that I could put on my resume — it would get me coding and not just in the type of internship where you’re not really doing anything," Tucker said. "The other interns who came here before came back to school and said they felt like they could actually go work at a coding job once they were done here, as opposed to other internships that were more local where you still didn’t feel prepared. I have a husband, so a career is my next step."

North Carolina A&T sophomore William Hetchily, who is pursuing a degree in computer science, said he applied for the LLNL internship because he wanted to work on a real-life cybersecurity project and learn more about machine learning, which he only had limited experience with before.

"The machine learning that I tried to do before was really on my own — there was no class, no training or anything like that at my school," he said. "I wanted to have a deeper knowledge in data mining because I want to get into data science. Machine learning is being used everywhere. Everybody is using it because everyone needs to learn about data."

Tamia Small, a senior studying computer science at Norfolk State University in Virginia, returned to the Lab to attend the LLNL CECOR summer program for the second time. She credits the experience with encouraging her to pursue graduate school.

"I get to interact with other interns and feed off of what they know and share what I know," Small said. "The staff here are great, they push us to learn more and the classes that are offered here for free are just phenomenal. People pay hundreds of dollars to learn what we’re learning and we’re getting it for free. Because of CECOR, I’ve found out that I want to do something in cybersecurity. It has given me the opportunity to interact with other CECOR students and make connections that can last a lifetime."

Before their stay is up in mid-August, the students will work on their resumes, compete in a poster symposium and learn about establishing their personal brand, culminating with a round-robin job interview session, which could land them permanent employment at the Lab.

Currently there are no plans in place to continue the CECOR consortium beyond this summer, but organizers are hopeful something can be arranged to extend it into the future, perhaps by "refactoring" and streamlining the consortium.

"We’re just not done," Baylis said. "We went from a walk to a brisk walk and possibly getting ready to jog. It’s a cross-country run and it evolves over time. This was an avenue for us to be able to cultivate the talent that fits us and potentially fits the rest of the nation as well. And as a result of that, it’s something we should hang our hat on and be proud of."

"Being able to work these past five years with such a broad talent pool and partnering with schools that I’d never had exposure to has been tremendously rewarding," Matarazzo added. "It’s been the most fulfilling part of my career. Seeing these students flourish and launch their careers – where they’ve gone and what they’ve done is my legacy, it’s something I’m proud of."