The Catalyst supercomputer at Lawrence Livermore employs a Cray CS300 architecture modified specifically for data-intensive computing. The system is available for collaborative research with industry and academia.

The partnership that produced the first-of-a-kind Catalyst supercomputer was selected for an HPCWire "Best HPC Collaboration Between Government & Industry" award by readers and editors of the publication.

LLNL Computer scientist Abhinav Bhatele was recognized at SC14 for his high-performance computing research (HPC) by the IEEE Technical Committee on Scalable Computing. The Young Achievers in Scalable Computing Award acknowledges individuals within five years of receiving their Ph.D. degree who have made outstanding, influential and potentially long-lasting contributions in the field of scalable computing. Abhinav’s work focuses on how researchers can use present and future HPC architectures with the highest possible efficiency. 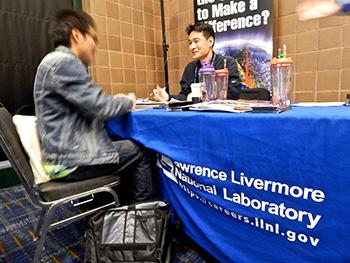 In other supercomputing news, the latest edition of the Top 500 list of the world’s most powerful computers was released Tuesday in New Orleans. The ranking of the five most powerful systems remains unchanged from the previous list announced in June of this year. LLNL’s Sequoia remains No. 3 and Vulcan No. 9. China’s Tianhe-2 (Milky Way – 2) retained the No. 1 ranking and Oak Ridge National Laboratory’s Titan No. 2. Four of the top 10 supercomputers are at DOE laboratories.

Although the United States remains the top country in terms of overall systems with 231, this number is down from 233 in June 2014 and down from 265 on the November 2013 list. The U.S. is nearing its historical low number on the list.