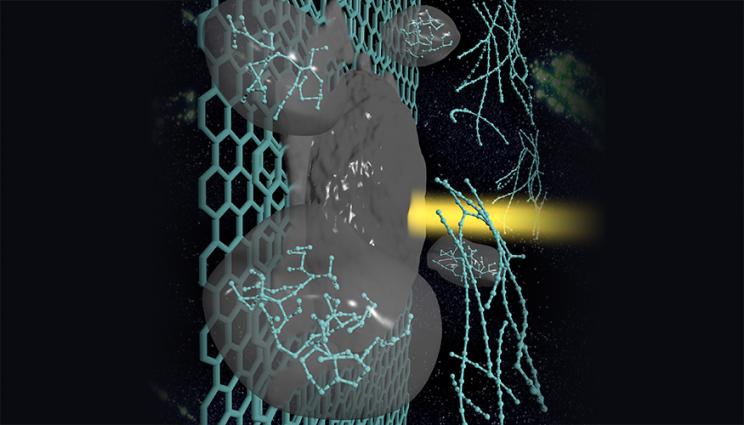 A carbyne strand forms in laser-melted graphite. Carbyne is found in astrophysical bodies and has the potential to be used in nanoelectronic devices and superhard materials. Image by Liam Krauss/LLNL

The smallest of electronics could one day have the ability to turn on and off at an atomic scale.

Lawrence Livermore National Laboratory scientists have investigated a way to create linear chains of carbon atoms from laser-melted graphite. The material, called carbyne, could have a number of novel properties, including the ability to adjust the amount of electrical current traveling through a circuit, depending on the user’s needs.

Carbyne is the subject of intense research because of its presence in astrophysical bodies, as well as its potential use in nanoelectronic devices and superhard materials. Its linear shape gives it unique electrical properties that are sensitive to stretching and bending, and it is 40 times stiffer than diamond. It also was found in the Murchison and Allende meteorites and could be an ingredient of interstellar dust.

Using computer simulations, LLNL scientist Nir Goldman and colleague Christopher Cannella, an undergraduate summer researcher from Caltech, initially intended to study the properties of liquid carbon as it evaporates, after being formed by shining a laser beam on the surface of graphite. The laser can heat the graphite surface to a few thousands of degrees, which then forms a fairly volatile droplet. To their surprise, as the liquid droplet evaporated and cooled in their simulations, it formed bundles of linear chains of carbon atoms.

"There’s been a lot of speculation about how to make carbyne and how stable it is," Goldman said. "We showed that laser melting of graphite is one viable avenue for its synthesis. If you regulate carbyne synthesis in a controlled way, it could have applications as a new material for a number of different research areas, including as a tunable semiconductor or even for hydrogen storage.

"Our method shows that carbyne can be formed easily in the laboratory or otherwise. The process also could occur in astrophysical bodies or in the interstellar medium, where carbon-containing material can be exposed to relatively high temperatures and carbon can liquefy."

Goldman’s study and computational models allow for direct comparison with experiments and can help determine parameters for synthesis of carbon-based materials with potentially exotic properties.

"Our simulations indicate a possible mechanism for carbyne fiber synthesis that confirms previous experimental observation of its formation," Goldman said. "These results help determine one set of thermodynamic conditions for its synthesis and could account for its detection in meteorites resulting from high-pressure conditions due to impact."

The research appears on the cover of the Sept. 17 edition of the Journal of Physical Chemistry.