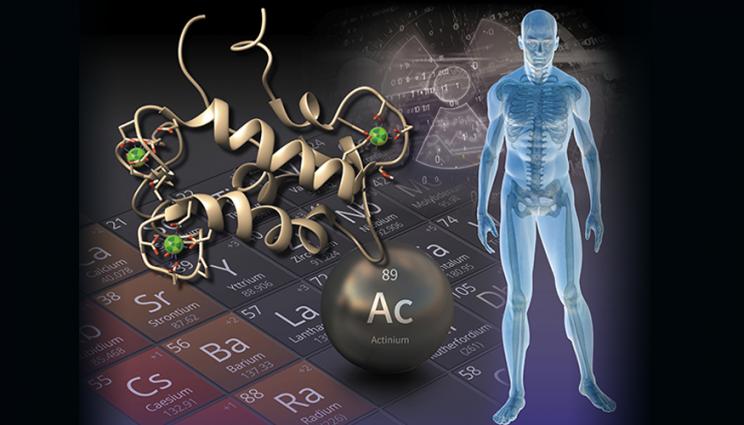 Actinium is a radioactive element that could revolutionize cancer medicine but its chemistry has thus far remained elusive. LLNL and Penn State researchers developed a new approach to study, capture and purify medical isotopes, including actinium. Their strategy leverages a natural protein that can tightly bind to medical isotopes without interacting with process impurities like radium, strontium, etc. Artwork by Thomas Reason/LLNL.

Lawrence Livermore National Laboratory (LLNL) and Penn State scientists have demonstrated how a protein can be recovered and purified for radioactive metals like actinium that could be beneficial for both next-generation drugs used in cancer therapies and the detection of nuclear activities.

Radioactive metals hold unique and essential places in a variety of medical imaging and therapeutic applications, but they require lengthy separation processes for their purification as well as synthetic and costly chelators (molecules tailored to bind the radioactive metal ions) that must form exceptionally stable complexes in the patient to minimize toxicity. Actinium-based therapies could revolutionize cancer medicine, with treatment efficacy hundreds of times higher than current drugs. However, they remain out of reach due to difficulties throughout the actinium supply chain, from isotope production to studying the element’s chemistry, and development of  robust chelators for it.

“These challenges exist even for medical isotopes in relatively widespread use, such as radioactive yttrium, but they are even more taxing in the case of actinium,” said LLNL scientist Gauthier Deblonde, lead author of a paper appearing in Science Advances.

As it turns out, actinium is one of the rarest elements naturally occurring on Earth, and its medical isotope must be produced in nuclear reactors or other large and costly instruments. As such, actinium chemistry is among the least understood and this impedes the development actinium-based medical applications. Research efforts have thus far focused on reusing or adapting known synthetic molecules used in the nuclear chemistry field, but results have been limited with actinium. The new research took a drastically new approach and leveraged a natural protein, lanmodulin, discovered by the Penn State members of the team in 2018. This new strategy not only improves and simplifies the purification processes for actinium but can also be used to recover and detect other radioactive elements, even at extremely low levels.

The team showed how lanmodulin can be used to bind, recover and purify actinium (at least 99.5 percent purity obtained in a single step), as well as another medically relevant radioisotope, yttrium-90, which is used for cancer therapy and diagnostics. The unprecedented efficiency and simplicity of the protein-based approach also allows preparation of actinium at much lower cost and probing its chemistry more conveniently. The process also is likely extendable to many other radioactive isotopes used in radiation therapy and imaging.

The actinium-lanmodulin complex is the very first actinium protein to be characterized. The researchers found that lanmodulin is so efficient compared to classic molecules that it specifically binds actinium even in the presence of large quantities of process impurities, like radium and strontium, or physiological elements like calcium, zinc, copper, etc. The study also demonstrates that the protein is more effective at binding actinium than binding the rare earth elements, the metals it binds to in nature.

“Our approach, that combines lanmodulin’s tight and specific binding with inexpensive filtration devices, allowed us to easily access minute quantities of radiometals, as low as a few attograms, where traditional technologies based on synthetic chelators fail,” Deblonde said. “What we accomplished here was simply unfathomable a few years ago. The unique combination of skills in radiochemistry, metal separation and biochemistry at LLNL and Penn State made this possible. I believe our technology will be incredibly useful not only to nuclear medicine but also for the in-field analysis of radioactive samples.” One attogram is one billionth of a billionth of a gram, about the weight of a single virus particle. In this case, it corresponds to the weight of just about 3,000 atoms of actinium.

The research not only offers insights into the fundamental chemistry of actinium but also suggests that the actinium-lanmodulin complex could be the basis for new actinium pharmaceuticals, as it in many ways outperforms the small metal chelators currently used in the clinic and clinical trials.

“We believe that our results unify the fields of metal separations and biochemistry and have strong potential to revolutionize several critical steps in medicinal chemistry – from purifying isotopes to delivering therapeutic doses to patients,” Cotruvo said.

Other Livermore researchers include Ziye Dong, Paul Wooddy and Mavrik Zavarin, in addition to Joseph Mattocks at Penn State. The work is funded by LLNL’s Laboratory Directed Research and Development program and the DOE Office of Science.