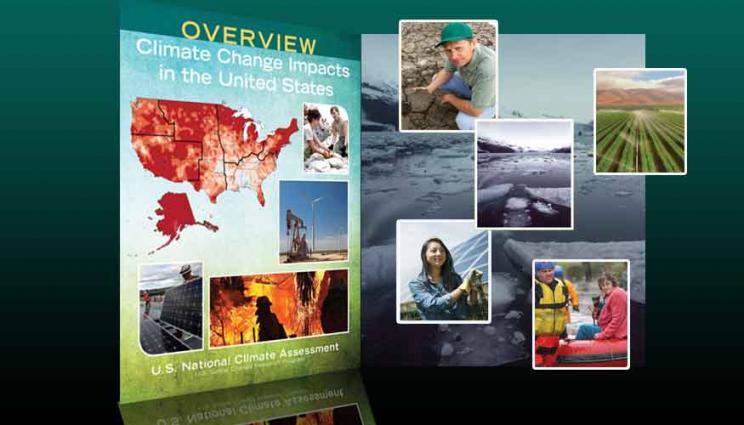 A new report released by the White House explains how climate change will affect the United States.

California to experience more droughts, wildfires in the future

California will experience increased heat, drought and insect outbreaks and more wildfires, according to a new report released Tuesday by the White House.

The National Climate Assessment reportalso explains how California will have to deal with declining water supplies, reduced agricultural yields, health impacts in cities due to heat and flooding and erosion in coastal areas.

The report, issued by the U.S. Global Change Research Program, is the authoritative and comprehensive report on climate change and its impacts in the United States.

The Southwest is the hottest and driest region in the U.S., where the availability of water has defined its landscapes, history of human settlement and modern economy. Climate changes pose challenges for an already thirsty region that is expected to get hotter and, in its southern half, significantly drier. The Southwest region includesthe states of Arizona, California, Colorado, Nevada, New Mexico and Utah.

Snowpack and streamflow amounts are projected to decline in parts of the Southwest, decreasing surface water supply reliability for cities, agriculture and ecosystems.

Increased heat and changes to rain and snowpack will send ripple effects throughout the region, affecting 56 million people - a population expected to increase to 94 million by 2050 -- and its critical agriculture sector. Severe and sustained drought will stress water sources, already over-utilized in many areas, forcing increasing competition among farmers, energy producers, urban dwellers and ecosystems for the region's most precious resource.

The Southwest produces more than half of the nation's high-value specialty crops, which are irrigation-dependent and particularly vulnerable to extremes of moisture, cold and heat. Reduced yields from increasing temperatures and increasing competition for scarce water supplies will displace jobs in some rural communities.

Winter chill periods are projected to fall below the duration necessary for many California trees to bear nuts and fruits, which will result in lower yields.

Once temperatures increase beyond optimum growing thresholds, further increases, like those projected beyond 2050, can cause large decreases in crop yields and hurt the region's agricultural economy.

Increased warming, drought and insect outbreaks, all caused by or linked to climate change, have increased wildfires and impacts to people and ecosystems in the Southwest. Fire models project more wildfire and increased risks to communities across extensive areas.

Climate change is exacerbating the major factors that lead to wildfire: heat, drought and dead trees. Between 1970 and 2003, warmer and drier conditions increased burned area in western U.S. mid-elevation conifer forests by 650 percent. Climate outweighed other factors in determining burned area in the western U.S. from 1916 to 2003. Winter warming due to climate change has exacerbated bark beetle outbreaks by allowing more beetles, which normally die in cold weather, to survive and reproduce. More wildfire is projected as climate change continues, including a doubling of burned area in the southern Rockies, and up to 74 percent more fires in California. For more on fire in the Southwest see pages 53-54 of the report.

Flooding and erosion in coastal areas are already occurring even at existing sea levels and damaging some California coastal areas during storms and extreme high tides. Sea level rise is projected to increase as Earth continues to warm, resulting in major damage as wind-driven waves ride upon higher seas and reach farther inland.

Projected regional temperature increases, combined with the way cities amplify heat, will pose increased threats and costs to public health in southwestern cities, which are home to more than 90 percent of the region's population. Disruptions to urban electricity and water supplies will exacerbate these health problems.