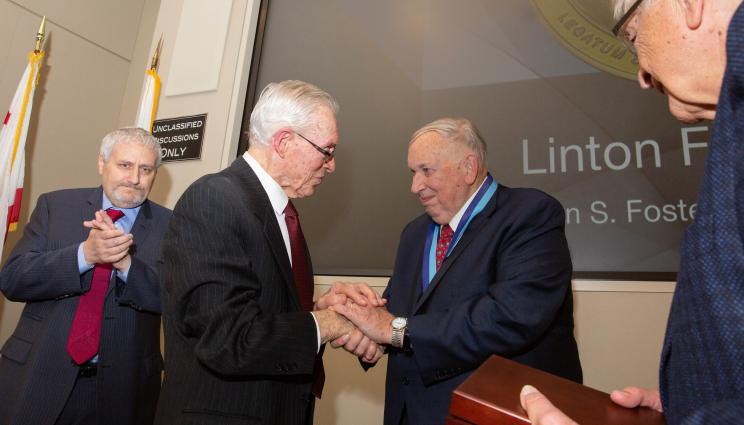 National security leaders past and present filled the Bldg. 453 auditorium last month to pay tribute to one of the nation’s visionaries in the fields of nuclear deterrence and arms control, former ambassador for arms control, administrator of the National Nuclear Security Administration (NNSA), nuclear submarine officer and the 2019 recipient of the John S. Foster, Jr. Medal, Linton Brooks.

Generations of former directors of both Lawrence Livermore and Los Alamos national laboratories dotted the front two rows, including the medal’s namesake and first recipient John S. Foster Jr. Brooks’ former colleagues and protégés took turns sharing stories of his visionary leadership as administrator of the NNSA, of his thought leadership in the field of arms control and of his ongoing dedication to mentoring the next generation.

“I am humbled and thrilled to be associated in any way with a living legend like Johnny Foster,” said Brooks in accepting the award. “I remember his continuous demand for technical excellence. I remember his ability to be cheerful, polite and absolutely tenacious technically.

“When I was commissioned in the Navy, I did not expect to finish my career without going to war with the Soviet Union,” Brooks said. “As I started to understand nuclear weapons, I started to think very seriously about nuclear policy, deterrence and preventing nuclear war. I came to learn that there’s a way to protect the country through deterrence. There’s also a way to protect the country through negotiation. In the five years [leading NNSA], what I learned was what a national treasure I was part of: great laboratories, hard-working plants and, above all, the true treasure is the people.”

As one of a handful of NNSA administrators to succeed Brooks, Gordon-Hagerty noted the legacy he has left in the NNSA.

“Those who have worked with him come away with awe at his commitment to service, and his passing knowledge to future generations,” Gordon-Hagerty said. “I salute you for what you have accomplished and for the groundwork you have laid. On behalf of the entire NNSA family, congratulations on this honor."

“Linton has been a paragon of service, commitment, courage and compassion for the nation — everything the Johnny Foster medal stands for,” Goldstein said. “He has impressed on me and many others the drive to do better and to do our best. I hope to one day live up to his example and expectations. They’ve been profoundly impactful for me.”

Roberts spoke of Brooks’ impact in the world of arms control and as someone who brought together policymakers and academics to open dialog with other nuclear powers.

“We first interfaced in the think tank world in the early ‘90s,” Roberts said. “At the time, nobody was an expert on U.S./China strategic relations. Linton got to work building a community of experts. With Russia, he reminded Americans that if we want to talk with the Russians, we have to be willing to talk about what they want to talk about. In Southeast Asia, he was the stud in the room doing all the heavy lifting. You don’t always know where the boundary of the possible is. Linton always knows.”

Tarter shared stories of collaborating with Brooks on a pair of task forces: a congressional commission on the strategic posture of the U.S., and a two-year study on the comprehensive test ban treaty.

“There are some task forces or advisory groups that have an impact beyond the participants and the sponsor and make a bigger difference,” Tarter said. “Linton did the things he always does, lead. If you think about what a leader is, there are leaders who are command leaders, there are leaders who are intellectual leaders, but there are other leaders who listen, think and put it all together into something that the group feels good about it, and that is what makes his leadership extraordinary.”

Goldblum shared stories about Brooks mentoring her early in her career, and how he continues to devote himself to training the next generation.

“Linton critiqued my early attempts to change the world, and he’s still involved as a mentor of students in the PPNT bootcamp,” Goldblum said. “With his guidance, these scholars are learning to make an impact. Linton still meets with participants one-on-one. Any student who wants to speak with him has the chance. His small, unforgettable exchanges make a big difference.”

Kuckuck shared stories about Brook’s role as one of the first to lead the NNSA, and how Brooks was there for him during trying times during a “perfect storm” that led to the recompeting of the UC California contract to manage LANL.

“When Linton speaks, people listen, and for good reason,” Kuckuck said. “He speaks such wisdom. He has a passion for people, loyalty, the ability to discern the right thing to do and the courage to do the right thing. That’s really defining in my mind. He was intensely aware and concerned for the people of LANL. He was a tremendous factor in relieving the stress for staff. I could feel his invisible hand on my back supporting me.”

“Linton could mobilize the written word,” Lehman said. “He was not a yes man. Johnny Foster was a giant of the greatest generation. While he has few true peers, Linton Brooks clearly merits the Foster Medal today.”

While not on the agenda, the award’s namesake, Foster, also took to the podium to say a quick word.

“In a world full of mundane jobs, we get to work with some of the most exciting technology there is,” Brooks said. “We are bound together by a common devotion to a mission. In a world where people complain about a lack of meaning in our lives, we have the privilege of serving something greater than ourselves. You should never forget what a blessing that is. Thank you for this honor and, above all, thank you for all you’ve done and are going to do to preserve American security and promote global security.”