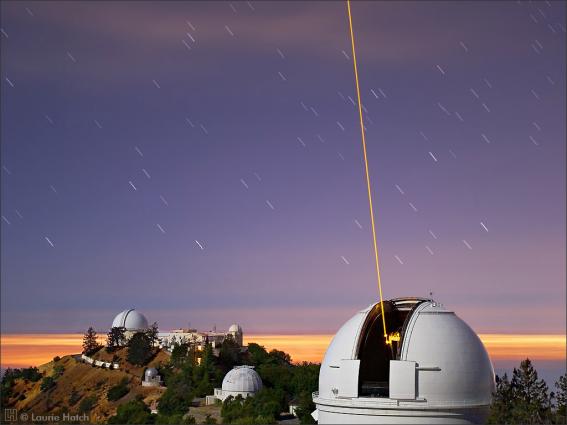 The Lick Observatory's Laser Guide Star forms a beam of glowing atmospheric sodium ions. This helps astronomers account for distortions caused by the Earth's atmosphere so they can see further and more clearly into space. Photos by Laurie Hatch/lauriehatch.com 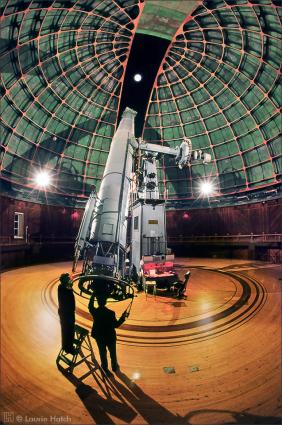 The Lick Observatory, situated on the summit of Mount Hamilton, is an astronomical observatory owned and operated by the University of California. It is the world's first permanently occupied mountain-top observatory.

"I have always been enthusiastic about helping astronomers see further and more clearly into space. I enjoyed being part of this developmental effort for many years," Danforth said. "To be able to make a dramatic impact on the world of astronomy was very exciting."

It was this combined expertise that made Danforth the right person to help bring the Laser Guide Star back to peak operating condition. According to Lick Observatory Superintendent Kostas Chloros, this work was needed as the system's performance and efficiency had degraded, impacting the research programs that require the use of a laser guide star.

"Pam and the rest of the team are experts on this laser system," Chloros said. "Their work from over a decade ago produced a very reliable, robust and stable system, which made operations go smoothly over the years. But a good, precise tune-up was due."

The low power problem was found to originate at the master oscillator and a burned dye cell.When Danforth evaluated the grazing incidence dye master oscillator (GIDMO) she found it had two significant burns. She was able to locate another viable upstream position. This new dye cell position required a major disassembly and realignment of the GIDMO.

Danforth was able to reposition the grating and realign the GIDMO to the peak of the sodium signal. She also identified several external factors contributing to the low power out of the GIDMO and lower conversion efficiency in the amplifiers.

According to Chloros, this work increased the single frequency power out of the master oscillator dramatically, enabling a higher power and a broader pulse to be delivered to the amplifiers. The overall output power of the laser system was 2-3 times higher.

"As a result, the brighter sodium guide star produces a good reference signal for the newly-developed Shane Adaptive Optics system, and it has benefited other research groups and their projects, as well as new instrument development that takes place at Lick," he said.

"I really appreciated NIF giving me the opportunity bring this system back online," Danforth said. "It has been 10 years since I worked with this laser system, and to be able to go up to Lick observatory and take the GIDMO from almost non-functional to operating near its peak capacity was very satisfying."