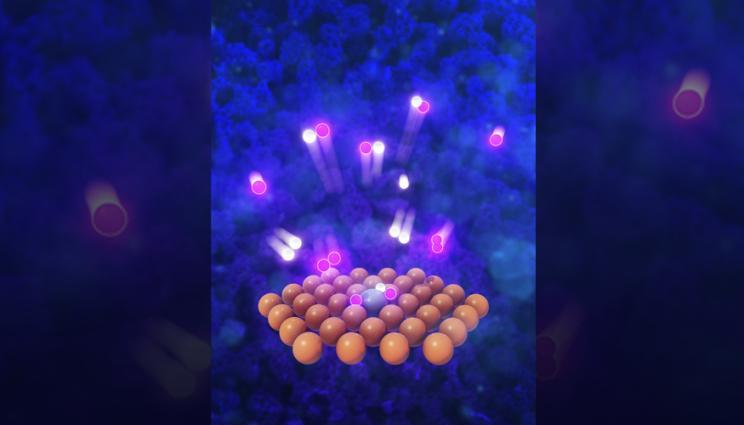 Breaking up is easy to do with copper-titanium catalysts

Producing fragrances and flavorings and converting chemicals derived from biomass could get a boost from a new technique to break up hydrogen in nanoporous copper-titanium catalysts.

The dissociation (breaking up) of hydrogen bonds is an essential elementary step in catalytic hydrogenation (a chemical reaction between molecular hydrogen [H2] and another compound or element, usually in the presence of a catalyst), typically requiring the use of precious metals.

Lawrence Livermore National Laboratory (LLNL) scientists are mitigating the use of precious metals by diluting alloys of copper with early transition metals as selective hydrogenation catalysts, based on the principle that a more reactive metal can initiate the catalytic cycle. The research appears in the Journal of American Chemical Society.

The team found that a nanoporous copper (Cu) catalysts doped with small amounts of titanium (Ti) increases the rate of hydrogen dissociation exchange by approximately one order of magnitude (5-7 times greater) compared to the undoped nanoporous Cu catalysts.

“This work will be of broad interest in the catalysis and chemistry community because it demonstrates the potential for using earth-abundant, early transition metal alloys as potential catalysts, a new class of materials that is first probed with a simple reaction, hydrogen-deuterium exchange,” said Jennifer Lee, the lead author of the paper and a postdoctoral fellow at Harvard University.

“We found that a dilute alloy bimetallic catalyst can be less expensive and may be effective for selective hydrogenation,” said LLNL materials scientist Zhen Qi, a co-author of the paper.

Through a combination of experiment and theory, the research indicates that isolated, metallic Ti atoms on the surface of the Cu host act as the active surface sites for hydrogen recombination and that the increase in the rate of exchange above that of pure Cu is caused primarily by entropic effects that originate from a change in the rate-limiting step.

“This new approach is of broad interest and significance because it looks at a new alloy composition with potential for selective hydrogenation catalysis,” said LLNL materials scientist Juergen Biener, a co-author of the paper. “This work opens up opportunities to expand dilute alloy catalyst design to include early transition metals for hydrogenation reactions.”

Other collaborators include lead institution Harvard University as well as University of Pennsylvania; University of California, Los Angeles; Ames Laboratory; Paul Scherrer Institute of Switzerland; and Lawrence Berkeley National Laboratory. The work was funded as part of the Integrated Mesoscale Architectures for Sustainable Catalysis, a DOE Energy Frontier Research Center.