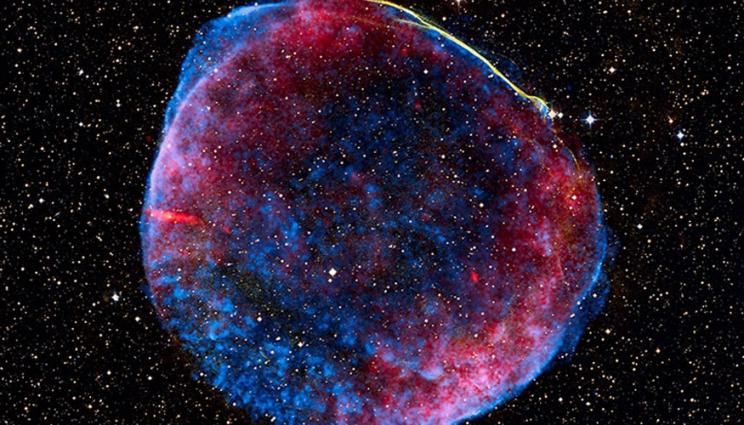 (remains of a supernova explosion), the debris cloud appears to be about 60 light-years across. LLNL researchers have found that the first solids to form in the solar system contain unusual isotopic signatures that show a nearby supernova (similar to the one in this image) injected material within ~100,000 years of their formation Image courtesy of NASA, ESA, Zolt Levay (STScI)

Blast from the past

That supernova, caused from the cataclysmic death of a star, could have even triggered the birth of the sun.

Most of the mass in the universe is from light elements like hydrogen and helium. The heavier elements that make up planets are produced inside stars or created when they explode as supernovae. But according to researchers, it is unclear how such events may have affected the birth and evolution of the solar system.

Gregory Brennecka and Lars Borg of Lawrence Livermore National Laboratory and their colleague Meenakshi Wadhwa of Arizona State University examined calcium-aluminum-rich inclusions (CAIs) found in meteorites. CAIs consist of minerals that are among the first solids condensed from a high temperature gas that existed in the proto-planetary disk at earliest stages of solar system formation. Because of their ancient age, CAIs are important carriers of isotopic information about the early solar system. The team found that the inclusions had different heavy isotope "fingerprints" compared to younger rocks from Earth, Mars or the moon.

"Because we see these systematic differences between the first solids and everything else that formed later, it gives us a time window for when the supernova would have occurred. And it tells us that the neighborhood we were growing up in was rough. There were possibly a lot of violent events happening when our solar system was forming."

Brennecka said it remains unclear if this same supernova helped trigger the formation of the sun. He said the length of the time between a supernova shock wave and the arrival of associated debris is not well known. Instead, several nearby star explosions may have helped shape the solar system. "If you can do it all with one supernova, that would make things less complicated," he said.

To see the full study, go to Proceedings of the National Academy of Sciences.