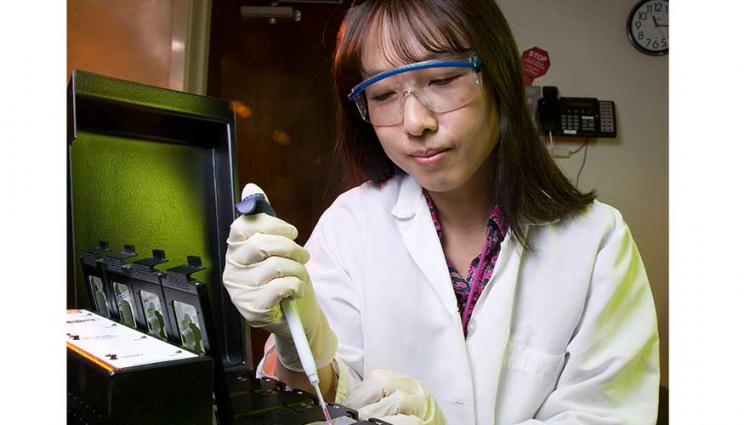 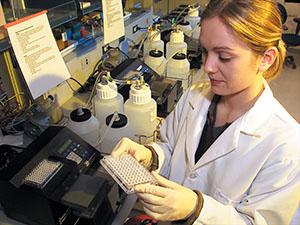 In February 2001, the international science community celebrated completion of the first draft of the human genome. Researchers from Lawrence Berkeley,  Lawrence Livermore, and Los Alamos national laboratories at the Joint Genome Institute announced in 2000 they had decoded in draft form the genetic information of human chromosomes 5, 16, and 19. The chromosomes contain 10,000 to 15, 000 genes, whose defects may lead to diseases such as diabetes, leukemia, and atherosclerosis. In this photo, Tijana Glavina removes a plate of purified DNA from a plate washer. 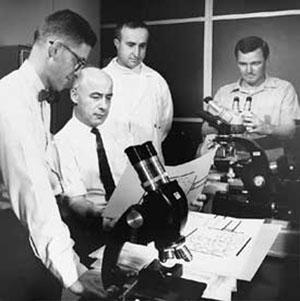 The first biomedical and environmental research program began at Livermore in 1963. John Gofman, a distinguished professor at the University of California at Berkeley, was recruited to set up the program and given the charge of studying the effects of radiation on humans. Mort Mendelsohn was recruited to lead the program after Gofman's departure in 1969 to return to teaching.  Pictured here are Goffman, group leaders Fred Hatch and Bernie Shore and Jay Minkler.

Over the last 50 years, scientists from Lawrence Livermore National Laboratory's (LLNL) Biosciences and Biotechnology Division (BBTD) have changed the world by being instrumental researchers on the Human Genome Project, developing high-tech devices to sort cells and analyze DNA and providing the science for federal programs to defend the nation from biological weapons.

During its golden anniversary this year, Lawrence Livermore salutes the monumental achievements of this innovative division in the Physical and Life Sciences (PLS) Directorate.

What made BBTD so successful over the years, he said, are the outstanding scientists who worked side-by-side on fundamental science and technology development.

"This happens at very few places around the world," he said. "It's why we've been able to help develop such things as chromosome painting, biological accelerator mass spectrometry , The Human Genome Project and systems for monitoring for the release of biological agents."

BBTD, or Bio as it's now commonly called (some long time employees still refer to it as "biomed"), began as the Biomedical and Environmental Research Program (BER) in 1963. A distinguished UC Berkeley professor named John Gofman was recruited to establish the program and to study the effects of radiation on humans. Mortimer Mendelsohn, who would go on to be a Bio associate director, was recruited to lead the program after Gofman left the Lab in 1969 to teach.

Bio's focus on basic research led to accomplishments that have changed fields such as genomics and biology and industries such as healthcare and biotechnology. Its technologies have impacted national security and made America a safer place.

"This highly skilled group of scientists have made discoveries over the decades that have advanced scientific thinking for the greater good," said Brian Mayall, who was group leader of Bio's cytogenetics and cytometry discipline during its formative years.

"When a pressing problem is identified, Bio researchers have the necessary depth and breadth of knowledge to quickly and creatively solve the problem," Kulp said.

The major scientific advances Bio has made or contributed to have both revolutionized science and significantly contributed to Lawrence Livermore's mission of conducting science in the national interest.

"Our multidisciplinary research teams have developed innovative assays for early detection and surveillance of known and emerging pathogens, which could be intentionally released by terrorists, to protect our national security," said Crystal Jaing, group leader of Bio's Applied Genomics Group.

Mendelsohn said those discoveries were possible because the Lab always supported Bio's research. "They loved the fresh discoveries we were making," he said. "It was a very healthy environment in which to conduct research."

Here is a decade by decade look back at just some of the breakthroughs to come out of the Lab's bio programs.

Bio's origins come from concerns over the presence of radioisotopes in food and the environment, which eventually led to the establishment of biological research programs at national labs such as Lawrence Livermore.

Bio's first mission was to understand the consequences of radiation and radioisotopes on living things that were not well known at that time.

"LLNL was instrumental in studying this," Turteltaub said. "We had a farm on site. We were studying the effects of radiation on cells to humans and how radionuclides moved through the food chain."

Eventually Bio researchers began using computers to study chromosomes. They used a system called cytophotometric data conversion system (CYDAC) for calculating the amount of DNA present in any given chromosome.

CYDAC could see each chromosome as 100,000 bits of information using electron microscope data. The data was compared to healthy chromosomes and the system reported abnormalities. CYDAC's unprecedented precision resulted in interest outside of the Lab and led to clinical application of the technology.

Advanced cytometry instruments such as the Biomedical Cell Sorter were developed. It allowed Bio researchers to automatically identify and sort cells or subcellular material. Using a laser beam, this machine scans samples to accurately select specific subsamples of interests.

The Biomed Cell Sorter allowed scientists to perform many functions, including distinguishing white blood cells and bone marrow cells by their differential affinity for antibodies. Researchers also can sort human chromosomes by their differential uptake of one or more dyes that are specific for DNA. This capability contributed to early work in the Human Genome Project.

This decision to start the international initiative was endorsed in a report that year by a DOE committee. The project, which included scientists from around the world, began at LLNL and subsequently moved to a DOE research facility in Walnut Creek called the Joint Genome Institute , which was established by Lawrence Livermore, LANL and LBNL. Primary funding for it came from DOE and the National Institutes of Health (NIH). Tony Carrano, a longtime bio associate director, led LLNL's efforts to establish the Human Genome Project.

Bio researchers used advanced cytometry techniques to sort human chromosomes during the Human Genome Project. The project's principal goal was to determine the sequence of chemical base pairs that make up human DNA and to identify and map the total genes of the human genome. It began in 1990 with a goal of mapping the human genome in 15 years. It was achieved by 2003, two years ahead of schedule.

After Bio researchers Don Pinkel and Joe Gray published their solution to chromosome painting in the mid 1980s, it was widely adopted. The publication is one of the most highly cited works to come out of Lawrence Livermore. Following their paper, the first application in the late 1980s was to improve biodosimetry in humans by measuring chromosomal aberrations. They developed a chromosome fluorescent painting technique that has since become a standard technique in biological research. Vysis, a subsidiary of Abott Pharmaceuticals, eventually sold this technology.

The ability to sort chromosomes using Bio's high-speed sorter led to the development of chromosome painting, a rapid method to measure damage to specific chromosomes. The outcome of these Bio studies was to measure the genetic effects of exposure to toxic chemicals and radiation.

Research advances made by Pinkel and Gray to identify particular genes in a chromosome paved the way for them to discover Fluorescent in situ hybridization (FISH). FISH is a cytogenetic technique used to detect and localize the presence or absence of specific DNA sequences on chromosomes, allowing researchers to see which chromosomes have certain genes of interests.

Bio researchers delivered to the U.S. Army for testing the first fully portable, battery-powered, real-time DNA analysis system. It was the first in a series of increasingly capable instruments to rapidly detect the presence of biological agents based on miniaturized flow cytometry and polymerase chain reaction (PCR).

PCR increases the number of copies of a specific sequence of DNA in a sample by using repeated cycles of heating and cooling. Particular regions of DNA are amplified by adding a synthesized DNA probe or primer tagged with a fluorescent dye to the sample. Each probe or primer is designed to attach to the DNA of a specific organism -- anthrax, plague, etc. If the DNA from that organism is present in the sample, the DNA is amplified. By measuring the sample's fluorescence, the instrument reports the presence or absence of the targeted organism.

Research was completed on the mouse genome as part of Bio's scientific efforts in comparative genomics, analyzing and comparing the genetic material of different species to better understand inherited diseases and the function of human genes. Studies show that the genes of humans and mice are 85 percent identical.

Working with the Physics Directorate, Bioscientists began using accelerator mass spectrometry to characterize the effects of toxins at low dose to better understand the risk from toxins in the environment and food. This led to the establishment of the National Resource for Biomedical Accelerator Mass Spectrometry (bioAMS) to help researchers who have a need to accurately measure very low levels of radioisotopes in their research.

AMS was originally used at Lawrence Livermore to overcome limitations in detection sensitivity for studying the molecular damage caused by exposure to environmentally relevant levels of carcinogens and pollutants. Since being established as a premier analytical technique, the high sensitivity of AMS has allowed LLNL researchers and their collaborators to address important issues in nutrition, pharmacology, cell biology and comparative medicine.

The international science community celebrated completion of the first draft of the human genome in 2001. A year prior, researchers from Bio, and Lawrence Berkeley and Los Alamos national laboratories at the Joint Genome Institute announced that they had decoded in draft form, the genetic information of human chromosomes 5, 16 and 19. The chromosomes contain 10,000 to 15,000 genes, whose defects may lead to diseases such as diabetes, leukemia and atherosclerosis.

Following the Sept. 11, 2001, terrorist attacks, Bio researchers developed and deployed capabilities to sample, detect and respond to biological threats in the environment. This eventually helped pave the way for programs such as BioWatch, a federal program designed to detect the release of pathogens into the air in the event of a terrorist attack on major American cities.

Bio researchers developed candidate signatures for pathogens that might be used in a bioterrorist attack and for bioorganisms that can cause a disease epidemic. Using this research, they began characterizing virulent pathogens. Scientists developed multiplexed assays that simultaneously detect multiple bacteria, viruses and toxins in order to speed up pathogen detection. They also developed multiplexed assays to detect foreign animal diseases such as foot-and-mouth disease. Additionally, Bio scientists are studying how a host's body interacts with a pathogen.

A team of biologists and informatics experts from Bio developed the Lawrence Livermore Microbial Detection Array (LLMDA), which can simultaneously identify thousands of known viruses and bacteria within 24 hours. Current detection systems focus on small, prioritized sets of high-risk biological pathogens. LLMDA, however, is able to identify a broad range of organisms, including pathogens on a priority screening list, DNA-sequenced bacteria or viruses, or even emerging pathogens containing DNA sequences previously identified in other pathogens.

Bio researchers are testing a next-generation LLMDA that contains 400,000 probes representing about 67,000 sequences from 3,100 viruses and close to 2,000 bacteria. Their goal is to develop a cost-effective technology that can detect both known and unknown pathogens within 24 hours.

LLNL Archives contributed to this article.