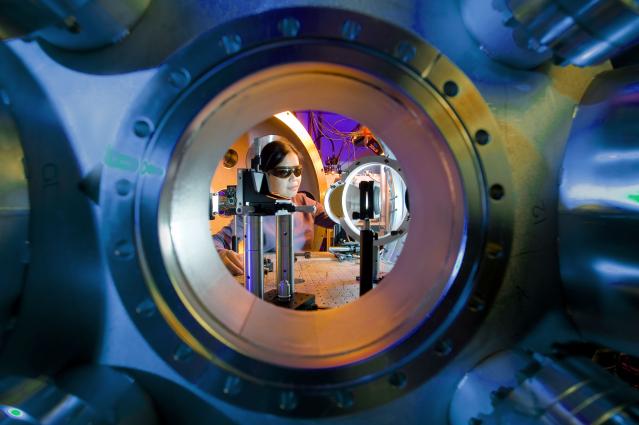 Physicist Hui Chen sets up targets for the anti-matter experiment at the Jupiter laser facility. Click for

Billions of particles of anti-matter created in laboratory

LIVERMORE, Calif. – Take a gold sample the size of the head of a push pin, shoot a laser through it, and suddenly more than 100 billion particles of anti-matter appear.

The anti-matter, also known as positrons, shoots out of the target in a cone-shaped plasma "jet."

This new ability to create a large number of positrons in a small laboratory opens the door to several fresh avenues of anti-matter research, including an understanding of the physics underlying various astrophysical phenomena such as black holes and gamma ray bursts.

Anti-matter research also could reveal why more matter than anti-matter survived the Big Bang at the start of the universe.

"We’ve detected far more anti-matter than anyone else has ever measured in a laser experiment," said Hui Chen, a Livermore researcher who led the experiment. "We’ve demonstrated the creation of a significant number of positrons using a short-pulse laser."

Chen and her colleagues used a short, ultra-intense laser to irradiate a millimeter-thick gold target. "Previously, we concentrated on making positrons using paper-thin targets," said Scott Wilks, who designed and modeled the experiment using computer codes. "But recent simulations showed that millimeter-thick gold would produce far more positrons. We were very excited to see so many of them."

In the experiment, the laser ionizes and accelerates electrons, which are driven right through the gold target. On their way, the electrons interact with the gold nuclei, which serve as a catalyst to create positrons. The electrons give off packets of pure energy, which decays into matter and anti-matter, following the predictions by Einstein’s famous equation that relates matter and energy. By concentrating the energy in space and time, the laser produces positrons more rapidly and in greater density than ever before in the laboratory.

"By creating this much anti-matter, we can study in more detail whether anti-matter really is just like matter, and perhaps gain more clues as to why the universe we see has more matter than anti-matter," said Peter Beiersdorfer, a lead Livermore physicist working with Chen.

Over the years, physicists have theorized about anti-matter, but it wasn’t confirmed to exist experimentally until 1932. High-energy cosmic rays impacting Earth’s atmosphere produce minute quantities of anti-matter in the resulting jets, and physicists have learned to produce modest amounts of anti-matter using traditional particle accelerators. Anti-matter similarly may be produced in regions like the center of the Milky Way and other galaxies, where very energetic celestial events occur. The presence of the resulting anti-matter is detectable by the gamma rays produced when positrons are destroyed when they come into contact with nearby matter.

Laser production of anti-matter isn’t entirely new either. Livermore researchers detected anti-matter about 10 years ago in experiments on the since-decommissioned Nova "petawatt" laser – about 100 particles. But with a better target and a more sensitive detector, this year’s experiments directly detected more than 1 million particles. From that sample, the scientists infer that around 100 billion positron particles were produced in total.

Until they annihilate, positrons (anti-electrons) behave much like electrons (just with an opposite charge), and that’s how Chen and her colleagues detected them. They took a normal electron detector (a spectrometer) and equipped it to detect particles with opposite polarity as well.

"We’ve entered a new era," Beiersdorfer said. "Now, that we’ve looked for it, it’s almost like it hit us right on the head. We envision a center for antimatter research, using lasers as cheaper anti-matter factories."