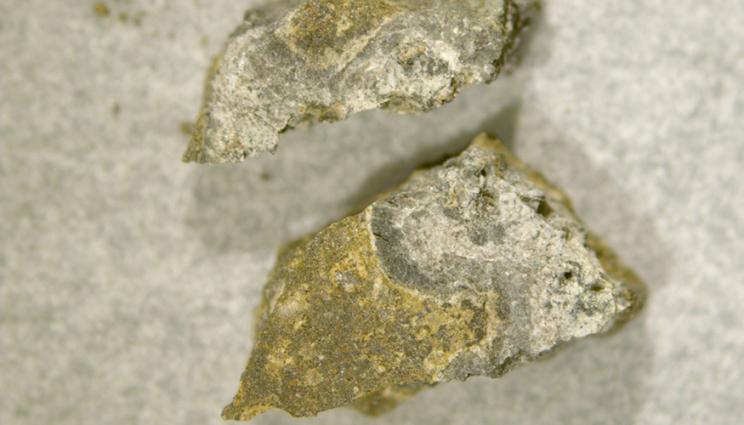 A piece of carbonaceous chondrite that contains a large calcium-aluminum-rich inclusion similar to those used in this study. Photo by: Quinn Shollenberger/LLNL.

A bigger nursery for the solar system’s first formed solids

The earliest solids formed in the solar system give clues to what radioactive species were made by the young sun, and which ones were inherited.

By studying isotopic variations of the elements vanadium (V) and strontium (Sr), an international team of researchers including scientists from Lawrence Livermore National Laboratory (LLNL) found that those variations are not caused by irradiation from the sun but are produced by condensation and evaporation reactions in the early solar system. The research appears in the Sept. 29 edition of Science Advances.

“It turns out that some of the short-lived radioactive isotopes researchers previously thought were products of irradiation from the early active sun are instead most likely inherited from our parent molecular cloud, which, in turn, tells us a significant amount about the cosmic neighborhood we grew up in,” said LLNL cosmochemist Greg Brennecka, a co-author of the paper.

Calcium-Aluminum-rich inclusions (CAIs) in meteorites are the oldest dated solids that formed within the solar system. They carry crucial information regarding the environmental conditions of the earliest stages of the protoplanetary disk before any of the planets formed. This research also suggests that the oldest solids in our solar system could have formed further away from the sun than previously thought, with far-reaching implications regarding the dynamical structure of the nascent solar system.

“Our findings indicate that CAI formation during molecular cloud infall and disk build-up likely occurred at greater distances from the sun that we thought before, potentially up to planet-forming regions of the solar system,” said LLNL postdoc Quinn Shollenberger, a co-author of the paper.

Astronomical observations of young stellar objects indicate that their surrounding accretionary disks are directly exposed to levels of X-ray and high-energy particle emissions that are orders of magnitude higher than observed for most main sequence stars. However, the duration and characteristics (gradual or impulsive flares) of these early stages of high stellar activity remain poorly understood.

Anomalous abundances of short-lived radionuclides in CAIs of carbonaceous chondrite meteorites have been suggested to be fossil records of dust irradiation by solar cosmic rays at the inner edge of the protoplanetary disk. But the new research topples that theory. "Knowing where CAIs formed is crucial for us to understand the distribution and evolution of planet-forming dust in the nascent solar system," said David Bekaert, first author of the study.

These refractory inclusions are present in objects that formed in various parts of the solar system, and have even been found in comets that formed very far away from the sun. If CAIs originally formed very close to the sun, it tells scientists there was very vigorous and fast mixing throughout the protoplanetary disk. However, if these objects only formed in planet-forming regions further from the sun, as suggested by the recent paper, then far less radial mixing is required to have taken place.

“Basically, it gives us a feel for how high the blender was turned on. The speed of that blender is important for understanding how material moved around the early solar system, and why the solar system is arranged the way it is (gas giants outside, terrestrial bodies inside),” Brennecka said. “This study greatly relaxes the area in which the first solids of the solar system could have formed.”

Contributors to this work include LLNL scientist Ben Jacobsen, as well as researchers from Woods Hole Oceanographic Institution, University of Münster, University of California, Los Angeles, Goethe Universität, Durham University and the National Museum of Natural History. The research was funded by LLNL’s Laboratory Directed Research and Development program.