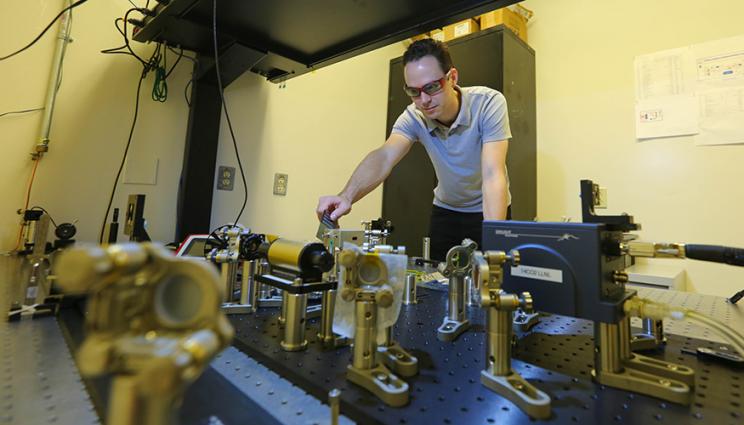 LLNL engineer Daniel McCartt is building a tabletop laser-based carbon-14 spectrometer that is 200 to 300 times more sensitive than tools on the market today. Photo by Julie Russell/LLNL

A new kid is coming to town in the form of an ultra-sensitive, laser-based, carbon-14 spectrometer that will be able to measure samples as small as one microgram of carbon.

McCartt’s group recently received a four-year grant from the National Institutes of Health (NIH) to develop the new tool. It will have an impact on biology from basic science experiments to more applied human subject studies in drug development.

"This new tool will be 200 to 300 times more sensitive than the measurement tools in the field today," McCartt said. "Our goal is to build a tabletop version that eventually could be commercialized."

Advanced carbon-14 techniques for biology were developed with AMS. The exceptional sensitivity of AMS allowed scientists to trace small doses of nutrients, toxins and therapeutics in humans and animals. These methods opened new regimes of experimentation such as human phase-0 drug trials using sub-therapeutic doses. However, AMS’ complexity and cost limited the proliferation of these techniques.

Development of the proposed second-generation Cavity Ring-Down Spectroscopy (CRDS) system would realize the full potential of state-of-the-art, laser-based, carbon-14 detection for biology. The previously NIH-funded R21 instrument to explore the possibility of detecting carbon-14 with cavity ring-down spectroscopy lacked the throughput and interface of systems common to modern biological labs -- such as liquid chromatography and mass spectrometry.

"With their ability to quickly detect and quantify ever smaller amounts of material, these systems are valued for their capacity to isolate individual biomolecules," McCartt said.

The new instrument will have similar sensitivity to AMS -- the ability to handle microgram-sized samples and the capability to measure analytes separated by LC systems or other high-throughput analytical biochemistry instruments. This level of carbon-14 sensitivity and the techniques it affords were previously restricted to room-sized AMS instruments that cost millions of dollars and require several dedicated Ph.D.-level scientists for operation.

"The CRDS instrument would be much smaller (tabletop-sized), cheaper and easier to operate," McCartt said. "The accessibility of this technology will enable high-throughput, small-sample-size experiments and bring carbon-14 measurements into the modern biological laboratory. It could provide a means to quantitatively analyze complex biochemical systems in any research lab."