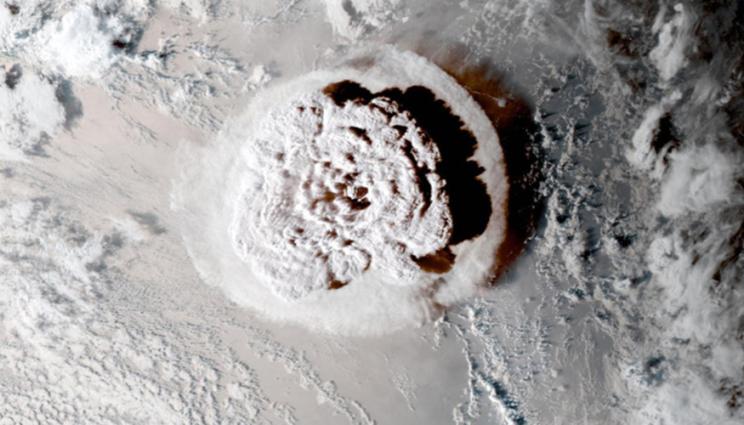 Satellite image of the Hunga volcano on Jan. 21, 2022. Image courtesy of the National Oceanic and Atmospheric Administration.

New research by an international team from 17 countries including Lawrence Livermore National Laboratory (LLNL) scientist Keehoon Kim demonstrates that, based on atmospheric pressure waves recorded by global barometers, the Hunga explosion was comparable in size to that of the 1883 Krakatoa eruption. The research appears in the May 12 edition of Science.

The eruption began in December 2021 on Hunga Tonga–Hunga Ha'apai, a submarine volcano in the Tongan archipelago in the southern Pacific Ocean (submarine volcanoes are underwater vents or fissures in the Earth's surface from which magma can erupt). The final eruption in January caused tsunamis in Tonga, Fiji, American Samoa, Vanuatu and along the Pacific rim, including damaging tsunamis in New Zealand, Japan, the United States, the Russian Far East, Chile and Peru.

The 1883 eruption of Krakatoa began May 20, 1883, and peaked on the late morning of Aug. 27, 1883, when more than 70% of the island of Krakatoa and its surrounding archipelago were destroyed as it collapsed into a caldera. The eruption killed more than 36,000 people, making it one of the most devastating volcanic eruptions in human history.

The new study indicates that the Hunga volcano produced an explosion in the atmosphere of a size that has not been documented in the modern geophysical record. The event generated a broad range of atmospheric waves observed globally by various ground-based and spaceborne instrumentation networks. The eruption from a submerged vent delivered volcanic ash and gas primarily into the stratosphere. An umbrella cloud developed at approximately 30 kilometers above sea level, with a central transient overshoot much higher.

Hunga is a largely submerged volcano located ~65 km to the north-northwest of Tonga. Eruption episodes consisting of relatively low-energy subsurface eruptions in 2009 and 2014–2015 had built a tephra cone that connected the established islands of Hunga Tonga and Hunga Ha’apai on the northwestern portion of the volcano. These subsurface eruptions transitioned into violent, impulsive eruptions from Dec. 19, 2021, as part of the most recent episode.

Kim specifically looked into the Lamb waves — acoustic-gravity waves (AGW) propagating along the Earth’s surface — with group velocities near the mean sound speed of the lower atmosphere. They also are associated with the largest atmospheric explosions from volcanic eruptions and nuclear tests and have periods on the order of several to hundreds of minutes.

“We find that such relationships are inapplicable to the signals generated by Hunga, as they result in unphysically large equivalent yields,” Kim said. “This difference is presumably because, for a given energy release, the long-duration climactic eruption excites longer-period pressure disturbances than the near-instantaneous nuclear reaction. Hunga signals have peak-to-peak pressures comparable to those produced by the largest historical atmospheric nuclear test (55 mt) but the dominant eruption signal periods are approximately four times longer than those of the nuclear explosion.”

The LLNL portion of the work was funded by the by the National Nuclear Security Administration’s Office of Defense Nuclear Nonproliferation Research and Development.