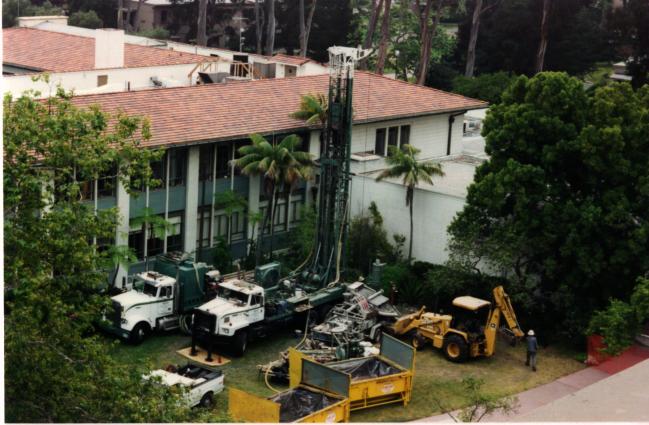 Current methods for estimating the ground-shaking effects of major earthquakes could underestimate their severity and lead to inadequate seismic protection of new and existing buildings, according to a pioneering study of earthquake hazards at three University of California campuses – Riverside (UCR), San Diego (UCSD), and Santa Barbara (UCSB).

The study, reported in the April issue of the journal Soil Dynamics and Earthquake Engineering, was conducted in a five-year collaborative research project initiated and directed by François Heuze, a geotechnical engineer at Lawrence Livermore National Laboratory (LLNL) near San Francisco. Seven UC campuses participated in the study, known as the Campus Earthquake Program.

The researchers found wide discrepancies between their own seismic hazard estimates for the three campuses and those produced by current estimating techniques used for designing new buildings and retrofitting existing buildings.

"The biggest weakness in the current state of the practice for seismic hazard assessment," said Ralph Archuleta, professor of seismology at UCSB, "is that we have very little data for very large earthquakes where the site is close to the causative fault. UCSB, UCR, and UCSD all have major faults that are very close to the campus."

"A single estimate of ground motion for a site is not appropriate," said Heuze. "Even if you have a known fault and restrict your calculations to a known magnitude, this fault could provide that magnitude in many different fashions. Thus the severity of the ground shock where you stand could vary widely."

To try to overcome this problem, the researchers placed several seismic monitoring stations at each campus in boreholes up to 100 meters (330 feet) deep – three times the depth of typical geophysical studies – and collected data on small earthquakes from local faults as well as regional seismic events. They took and tested soil samples at various depths and simulated hundreds of possible earthquake scenarios based on such variables as where a rupture might occur on the fault, the path it might travel, and how fast it might move.

"We know that under very strong shaking the soil may not behave in a linear fashion," said Archuleta, "so we used nonlinear soil dynamics computer models to calculate the surface ground motions created by fault ruptures."

Heuze and Archuleta praised the UC Office of the President, the participating campuses, and LLNL's University Relations Program for funding the study, one of the first projects sponsored by UC's Campus-Laboratory Collaborations Program. The collaborations are funded by a portion of the compensation UC receives from the U.S. Department of Energy for managing Livermore and Los Alamos national labs. Other UC campuses that helped in the research were Berkeley, Davis, Los Angeles, and Santa Cruz. San Diego State University also participated.

The study benefited greatly from the variety of disciplines and expertise that were brought to bear through the multicampus-laboratory collaboration, Heuze said. "A single campus or Laboratory could not provide all the required expertise," he said.

Archuleta said that while the study's results still need to be validated by additional research, the University of California is already re-examining the earthquake hazard assumptions it has been using in light of the site-specific findings.

"The university has not backed away from these results," he said. "They're aware of it and thinking about how they’re going to use it. This provides the structural engineers with additional information that’s at least as reliable as what they now depend on, if not more so."

Michael Bocchicchio, UC’s assistant vice president for facilities administration, agreed that the site-specific studies provide geotechnicians with a "broader set of data" to use in analyzing construction projects.

"This whole (seismic analysis) area is a big black hole," Bocchicchio said. "It’s the weak link scientifically in the building design process. In the end, though, buildings are more sensitive to good detailing and good construction for seismic performance, as opposed to the absolute numbers you use for (motion) acceleration."

"Given the existing building stock at the university's campuses and the new construction that will continue," Archuleta said, "it's important to be very site-specific. If you’re only using the current state of the practice, you could be missing critical information."