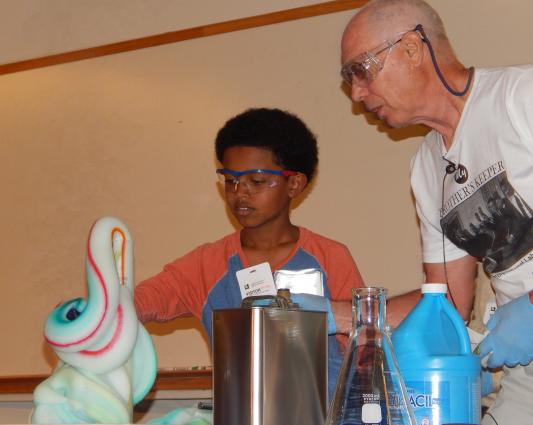 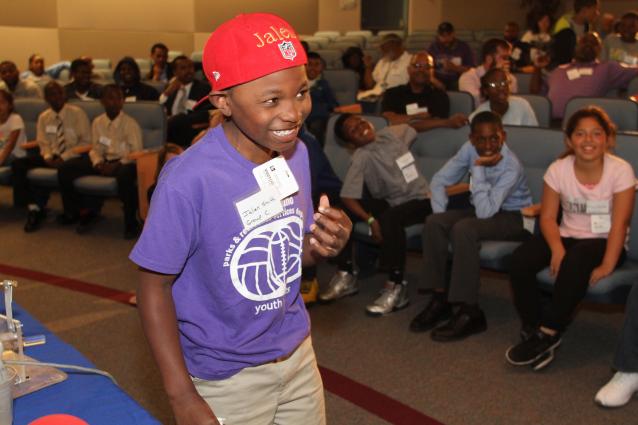 Jalen Smith is all smiles after participating in a Fun With Science marshmallow man experiment. Photo by Don Johnston.

Aaron Betanco-Ortiz experiments with air pressure during a Fun With Science presentation. Photo by Don Johnston. 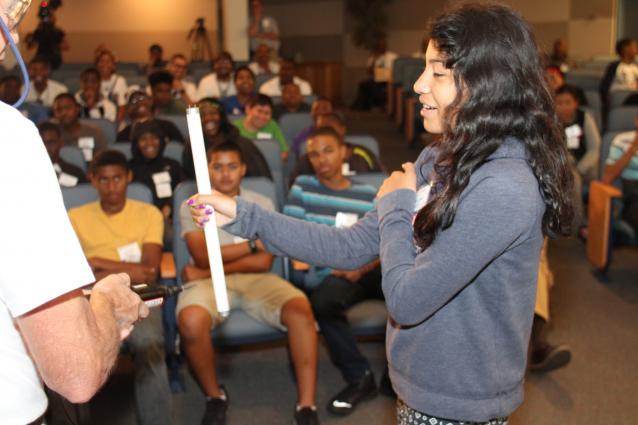 Beverly Luna experiments with electricity during a Fun With Science presentation. Photo by Don Johnston. 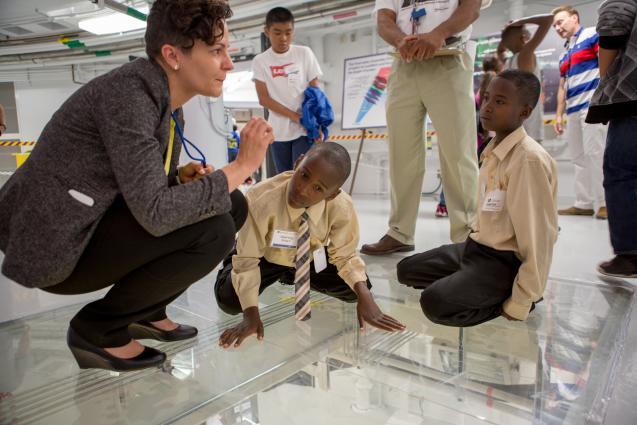 At right Daniel and Danny King look at the target positioner at the National Ignition Facility. Photo by Jason Laurea. 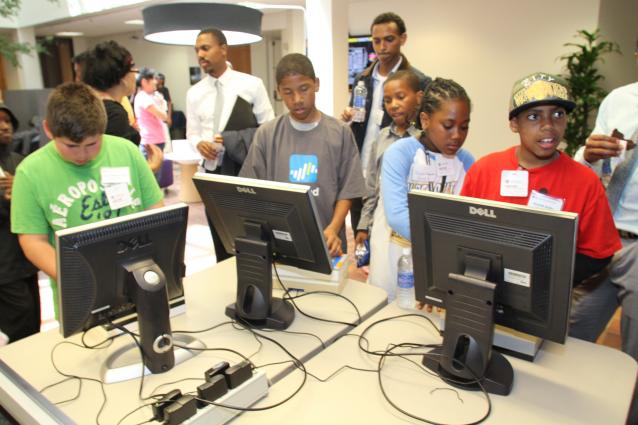 It was an exciting day for more than 60 disadvantaged youth from Oakland, San Francisco and Tracy, who visited the Laboratory on Friday for a special "Day at the Lab" as part of the White House initiative, "My Brother's Keeper."

The My Brother's Keeper (MBK) initiative was launched by President Barack Obama to address opportunity gaps with disadvantaged and disconnected youth, specifically targeting minority boys, to encourage positive future life and career choices.The goal is to connect young people to mentoring and support networks and to instill a passion for Science, Technology, Engineering and Mathematics (STEM).

The Department of Energy, which joined the MBK alliance and task force, chose Lawrence Livermore National Laboratory to be the first stop in several upcoming MBK events at the national laboratories throughout the summer.

The Lab event kicked off with Tony Baylis, director of LLNL's Office of Strategic Diversity and Inclusion Programs, who spearheaded the event,, welcoming the enthusiastic crowd and setting the tone for the day. "Our hope is that this will be a special day to inspire and motivate you and that you take something back with you to make a difference in your life,"  Baylis said.

"We are very proud to have you here and we are very proud to be hosting this event and representing the White House and the Department of Energy with the My Brother’s Keeper initiative," LLNL Director Bill Goldstein said. "The Laboratory leads the nation not only in science and technology, but also in the support of STEM education. It is critical for us to be involved all along the pipeline, as you are our future scientists and engineers."

"My hope is that through this experience a lot of the students here will start to think about careers in STEM, which for some, may not be something they would have thought was possible," said Theodore Miller, senior adviser for San Francisco Mayor Ed Lee. "I just hope that their eyes are open and their dreams are expanded by seeing things and meeting people that will inspire them to continue to fight, grow and learn."

Gerald Williams, research associate for Oakland Unified School District, brought 15 African-American students from Oakland schools. "My hope is that the students see something or experience something that sparks an interest and may alter their future educational and career path," Williams said.

Chatmon, who at the start of the day, stated that he wanted to be an NBA player when he grew up, was inspired by the day’s activities. "Just seeing all the amazing things today that people have built and made, I thought it was pretty cool. I really liked learning about cyber security and was shocked to learn how easy it is to be hacked," he said. At the end of the day Chatmon said: "If I don’t make the NBA, then I want to be an engineer, but during college, I can do both, which would definitely be my choice."

The students were treated to an interactive Fun With Science presentation where they not only learned about chemistry, electricity, air pressure and the states of matter, but participated by helping with the experiments.

Tre Germany, a seventh grade student at Claremont Middle School in Oakland, came dressed in a three-piece suit and was passing out business cards. "I want to be a mechanical engineer," Germany said. "I enjoyed Fun With Science, seeing electricity being conducted and what it can be conducted to and seeing what happens in air pressure in certain situations."

The day included a tour of the National Ignition Facility, the world’s largest laser system, and a visit to the LLNL Discovery Center where students learned about the Lab’s history and state of the art research programs and completed a scavenger hunt.Students enjoyed a presentation on cybersecurity where they learned about vulnerabilities with computing and using a cellphone.Using Legos and a Raspberry Pi the students built a game controller, they participated in an Information Technology (IT) themed "Family Feud"- style game and engaged with Lab scientists at various interactive displays on lasers (laser DJ, and laser light fountain) and additive manufacturing (3D printing). 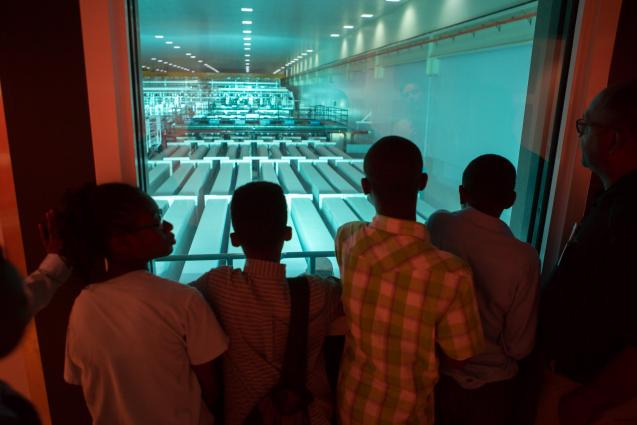 During lunch, employee volunteers sat with the students for some one-on-one interaction. Employees shared what they do at the Laboratory and asked the students about their dreams and goals. It was a great opportunity to get to know the students and discuss potential careers in STEM.

The Laboratory was honored to welcome several guests, including Elias Alcantara, the associate director of White House Intergovernmental Affairs; Kimberly Budil, vice president for the Office of the National Laboratories at the University of California; Nicole Nelson-Jean, manager of the Livermore Field Office; Jody Tallbear, the acting strategic initiatives and policy adviser in the Office of Economic Impact and Diversity at the Department of Energy, and Timothy McCleese, chief of staff to the deputy secretary of Energy.

Tallbear was fulfilling the mission of her office, which is to engage with underrepresented groups. "I want you to know that a lot of people are looking to you and they need you to be successful and to fill the jobs that will be needed in the future," she said to the students.

McCleese asked the students to remember a simple message: Pass it on. "You may not remember everything about the day, however, you will remember something," McCleese said."I want you to go home and tell your brother, your sister, your cousin, your mother about what you saw and heard here today, because you may be that one individual, because of what you shared, that will encourage them to raise their hand and participate the next time and opportunity such as this arises."

"I was greatly impressed with the quality of the MBK event here at LLNL," said McCleese at the closing ceremony. "You (LLNL) set the bar high for the other national laboratories. I plan to go back to Washington, D.C. and push the competition for other labs to do as well of a job as I have seen here today."

Alcantara also provided closing remarks: "As you know, the MBK initiative is very personal to the president. On behalf of the president, I want to thank you (LLNL). Congratulations on what you have accomplished."

The Laboratory was engaged on various social media platforms throughout the day communicating about the event. #MyBrothersKeeperAlliance, #POTUS @WhiteHouse @Energy