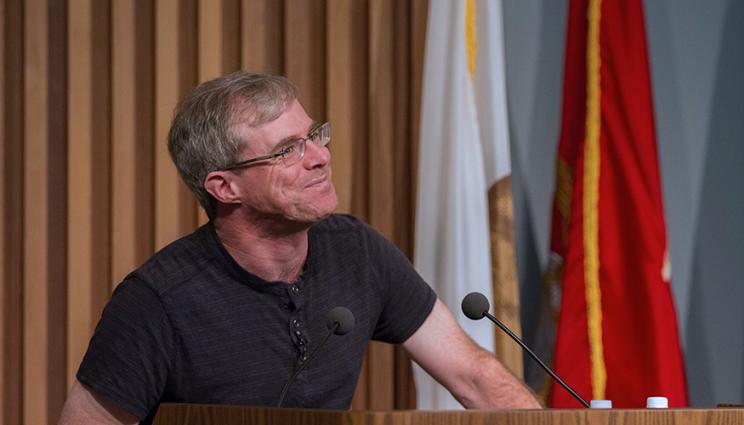 Imagine being inadvertently left for dead on Mars, completely alone and abandoned by your crew, with nothing but your wits and a scant amount of precious supplies to keep you alive.

That’s the enthralling premise of the best-selling science-fiction survival novel and soon-to-be released motion picture, "The Martian," scheduled to run in theaters nationwide on Oct. 2.

Amidst a whirlwind media blitz, the book’s author, Andy Weir, took time to visit the Laboratory on Wednesday, entertaining a packed house of nearly 400 Lab employees and special guests with his wit, vast and varied scientific knowledge and tales of his sudden rise to stardom.

"It’s kind of a homecoming," Weir said. "It’s special for me because it’s where I grew up." 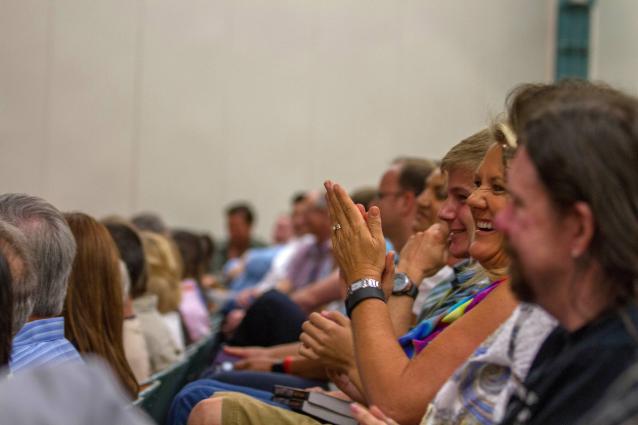 Weir, 43, is no stranger to Lawrence Livermore. His father, John, was a particle physicist at the Lab for 31 years before retiring in 2005. The author’s stepmother, Marita Spragge, built laser fusion targets here for nearly as long. John Weir described returning to the Lab with his son in the spotlight as "surreal."

"It’s like some kind of cosmic circle," he said. "Now I get to be escorted by my son and introduced as Andy Weir’s dad."

A self-described geek, the younger Weir grew up in Livermore admiring sci-fi’s pantheon of greats, including Isaac Asimov, Arthur C. Clarke and Robert Heinlein, and wanting to emulate them. But he decided he also needed to make a living.

At 15, while still a student at Livermore High, Weir was hired as a computer programmer at neighboring Sandia National Lab. He later attended UC San Diego, but dropped out to join the burgeoning tech industry, working for AOL and Blizzard Entertainment, where he helped create the hit game Warcraft II.

As his computing career blossomed, he continued writing sci-fi as, in Weir’s words, "a silly hobby," posting his short stories and fan fiction on his website.

In 2009, he began work on "The Martian," self-publishing it in serial form online for free. Popular demand led to an e-book version, which he priced at 99 cents. After hitting No. 1 on Amazon, along with rave reviews, Random House’s Crown Publishing came calling. The book contract and a film deal with 20th Century Fox were struck within days of each other — the print version quickly made the New York Times bestseller list, where it has appeared for 43 weeks.

"I have no idea what I did right," Weir admitted. "It’s like all of my wildest dreams are coming true."

The upcoming film adaptation, directed by veteran filmmaker Ridley Scott, stars Matt Damon as protagonist Mark Watney, a botanist and engineer who must rely on his problem-solving skills to survive the Red Planet’s brutal climate after a surprise super-storm causes his crewmates to abandon their mission and, assuming him dead, leave him behind.

Over a period of three years writing the novel, Weir took input from his online readers and studied subjects as varied as relativistic physics, orbital mechanics and the history of manned spaceflight to get the science as accurate as possible.

"If I read something and it doesn’t work (scientifically) it takes me out of the story," Weir said. "I wanted to make sure dorks like me liked it."

While Weir admits the tale isn’t 100 percent accurate, many of the errors, he said, were made for entertainment’s sake.

"I took a lot of effort to be technically accurate, but there are a few places where it’s not," Weir said. "I decided to look the other way (on a few things) because I wanted it to be awesome."

Weir’s next stop is the Toronto Film Festival for the world premiere of "The Martian" on Sept. 11.  Weir also is working on a second novel, tentatively titled "Zhek."