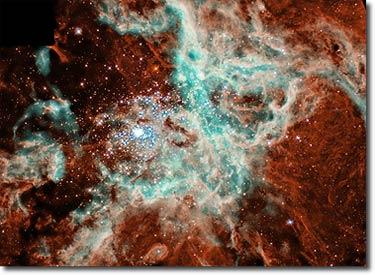 NASA's Hubble Space Telescope image shows a panoramic portrait of a vast, sculpted landscape of gas and dust where thousands of stars are being born. This fertile star-forming region, called the 30 Doradus Nebula, has a sparkling stellar centerpiece: the most spectacular cluster of massive stars in our cosmic neighborhood of about 25 galaxies. (

LIVERMORE, Calif. — Through a series of theoretical calculations and supercomputer simulations, astrophysicists have determined that new stars form by gravitational collapse rather than the widely held belief that they come from the buildup of unbound gas.

In astronomy, there are two dominant models as to how stars form. In both scenarios, a star initially forms when a gravitationally bound gas core collapses. But what ensues after that is the crucial distinction between the two theories.

In competitive accretion, interstellar hydrogen clouds develop clumps in which several small cores form, the seeds of future stars. These cores, less than a light year across, collapse under their own gravity and compete for gas in the surrounding clump, often gaining 10 to 100 times their original mass from the clump.

The alternative model, often termed the "gravitational collapse and fragmentation" theory, also presumes that clouds develop clumps in which proto-stellar cores form. But in this theory, the cores are large and, though they may fragment into smaller pieces to form binary or multiple star systems, contain nearly all the mass they ever will.

"Competitive accretion is the big theory of star formation in Europe, and we now think it’s a dead theory," said Richard Klein, an LLNL astrophysicist and adjunct professor of astronomy at UC Berkeley.

"In competitive accretion, the cores are seeds that grow to become stars; in our picture, the cores turn into the stars," said Chris McKee, professor of physics and of astronomy at UC Berkeley. "The observations to date, which focus primarily on regions of low-mass star formation, like the sun, are consistent with our model and inconsistent with theirs."

Competitive accretion theory goes on to explain that brown dwarfs – failed stars – and free-floating planets are protostars – the early phase of a star. These protostars are ejected from star-forming clumps and lose their encircling disks of gas and dust. In the past year, however, numerous brown dwarfs have been found with planetary disks.

"Competitive accretion theorists have ignored these observations," Klein said. "The ultimate test of any theory is how well it agrees with observation, and here the gravitational collapse theory appears to be the clear winner."

A theory of star formation is critical to understanding how galaxies and clusters of galaxies form, McKee said.

"Star formation is a very rich problem, involving questions such as how stars like the sun formed, why a very large number of stars are in binary star systems, and how stars 10 to 100 times the mass of the sun form," he said. "The more massive stars are important because, when they explode in a supernova, they produce most of the heavy elements we see in the material around us."

The model used by the team is a supercomputer simulation of the complicated dynamics of gas inside a swirling, turbulent cloud of molecular hydrogen as it accretes onto a star. This is the first study of the effects of turbulence on the rate at which a star accretes matter as it moves through a gas cloud.

"We have shown that, because of turbulence, a star cannot efficiently accrete much more mass from the surrounding clump," Klein said. "In our theory, once a core collapses and fragments, that star basically has all the mass it is ever going to have. If it was born in a low-mass core, it will end up being a low-mass star. If it’s born in a high mass core, it may become a high-mass star."

McKee noted that their supercomputer simulation indicates competitive accretion may work well for small clouds with very little turbulence, but these rarely, if ever, occur, and have not been observed to date. Real star formation regions have much more turbulence than assumed in the accretion model, and the turbulence does not quickly decay, as that model presumes. Some unknown processes, perhaps matter flowing out of protostars, keep the gases roiled up so that the core does not collapse quickly.

"Turbulence opposes gravity; without it, a molecular cloud would collapse far more rapidly than observed," Klein said. "Both theories assume turbulence is there. The key is, there are processes going on as stars begin to form that keep turbulence alive and prevent it from decaying. The competitive accretion model doesn’t have any way to put this into the calculations, which means they’re not modeling real star forming regions."

The work was supported by the National Aeronautics and Space Administration, the National Science Foundation and the Department of Energy.