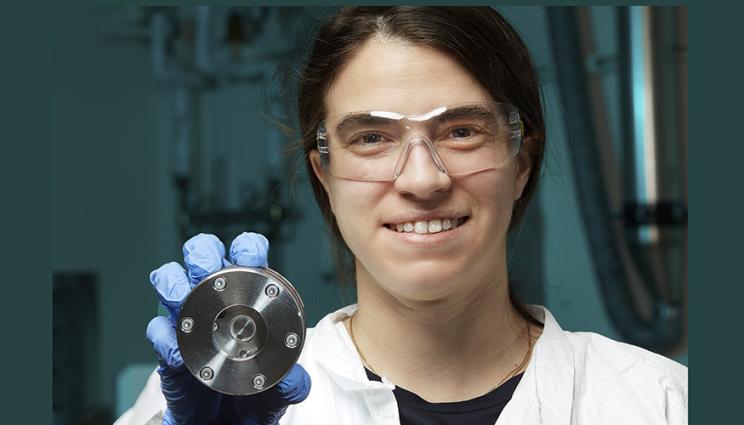 No need to worry, it is just a very small piece for scientific study.

In December 2014, the Japanese Aerospace Exploration Agency launched the spacecraft Hayabusa2 to the asteroid 162173 Ryugu. In December 2020, when the sample-return capsule successfully landed safely back on Earth with pristine pieces of Ryugu that it had collected, Lawrence Livermore National Laboratory (LLNL) cosmochemists were on high alert. They got to work on a proposal to receive a subsample of the asteroid. And that material is now on site at LLNL.

“Studying stardust in Ryugu is instrumental to determine the origin of the material including the different types of stars that contributed to the parent body of Ryugu, and therefore our solar system,” said Ziva Shulaker, the LLNL principal investigator of the project.

The isotopic composition of stardust is a geochemical fingerprint of the stellar environments from which the stardust formed (e.g., the type of star as well as its mass, temperature and neutron density at the time of stardust formation).

The conventional method used to obtain stardust from meteorites was to dissolve essentially the entire sample, leaving only the particles behind. However, dissolving everything but the stardust wastes a lot of sample material.

To preserve as much material as possible from such a precious sample, the LLNL team is developing nondestructive sample preparation techniques. Micro-computed tomography (Micro-CT) imaging of the sample will be used to locate stardust. Then, individual particles will be removed for mass spectrometer analysis to probe their isotopic compositions. These isotopic datasets will be used to constrain physical conditions, density, temperature and timescale of element creation in the parent stars.

To reconstruct the more recent history of our solar system, the relationship of Ryugu to other bodies in the solar system must be established.

“We are using the previously measured chemical and isotopic signatures of different bodies in the solar system to compare these pieces of Ryugu and to see how they fit together,” said Quinn Shollenberger, LLNL scientist in charge of relating Ryugu to Earth and other known samples in the world’s meteorite collections to understand solar system formation. “We are trying to better understand how Earth formed and evolved into what it is today.”

Because Ryugu is a uniquely pristine sample without terrestrial contamination, bulk-rock measurements of Ryugu can establish genetic relationships to planetary bodies and refine the accretion history of the terrestrial planets. Ryugu is closely related to C1 chondrites, which are believed to best represent the bulk solar system composition, and therefore the sun.

The LLNL team will use the bulk-sample iron isotopic composition of Ryugu to test whether Earth formed from material similar to Ryugu. Complimentary bulk-sample titanium, chromium and nickel isotopics also will be collected to understand the speed and conditions of Earth’s accretion from a protoplanetary disk.

The work conducted by the LLNL team provides a unique opportunity to gain comprehensive insight into what the solar system formed from and how the solar system – and Earth – has evolved since its formation.