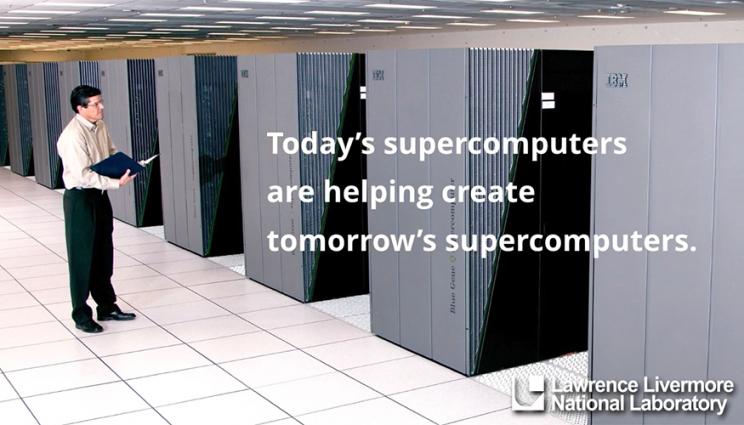 ASML, a leading provider of computer chip manufacturing equipment, is tapping Lawrence Livermore expertise in supercomputing and laser plasma physics to improve the performance of the light source for extreme ultraviolet (EUV) lithography, which is used to make microchips for the semiconductor industry.

"Merging expertise, we demonstrated that computer codes developed by LLNL can accurately simulate ASML’s experimental data from its EUV light source," said Steve Langer, computational physicist and project lead for LLNL. "Now that the simulation results and experimental data are aligned, we better understand the physics of EUV generation and can start to gain insight into what makes the light source perform well or poorly."

ASML’s San Diego R&D and manufacturing facility specializes in the production of light sources used within microlithography scanners. ASML’s complex systems image a pattern on a silicon wafer, building up billions of transistors and circuit elements layer by layer, to make integrated circuits, or microchips, for the semiconductor industry. Its next-generation EUV technology will enable chipmakers to increase the number of transistors and significantly improve the performance of supercomputers and electronics.

EUV light is generated when a high-intensity carbon dioxide laser pulse hits droplets of tin, heating them to become plasma (ionized gas). The plasma emits EUV radiation that is then collected and transferred to a microlithography scanner, where it is used to expose silicon wafers. To increase EUV power, ASML researchers turned to high-fidelity computer simulations to better understand the physics of laser-produced plasmas and fill in the gaps for challenging lab experiments.

"We anticipate our research partnership with LLNL will help us quickly zoom into the most promising technology development approaches, and thus shorten the time to market for future high-power EUV sources," said Michael Purvis, senior scientist at ASML. "We’ve already extended our knowledge of tin plasmas through our joint modeling efforts that promise to help advance EUV power for high-volume manufacturing environments."

"This is a wonderful example of how expertise and capabilities across LLNL can be successfully brought together with leading industry experts to intensely focus on advancing photon sources of great importance to the commercial sector and broader society," said Craig Siders, commercial technology development leader in NIF and Photon Science’s Advanced Photon Technologies Program.

"Our collaboration with ASML is just one example of how leading-edge companies can partner with Lawrence Livermore’s world-class HPC resources to advance technologies that stand to broadly benefit the computing industry as a whole, as well as help sustain U.S. leadership in science and technology," added Fred Streitz, director of the HPCIC.

ASML is one of the world’s leading manufacturers of chip-making equipment. ASML's guiding principle is continuing Moore's Law toward ever smaller, cheaper, more powerful and energy-efficient semiconductors. More information about ASML is available on the web.